A full-size model of the late-war Gotha Go P60C night fighter project recently went on show in a new exhibition hall at the Luftfahrttechnischen Museum Rechlin, north of Berlin, on the site of the Luftwaffe’s main experimental testing base from where the 60C would have flown had it ever progressed beyond the drawing board.

“A first flight wasn’t scheduled until summer 1945, and it had not even reached the full-size mock-up stage before the German surrender”

In a last-ditch effort to stem the nocturnal onslaught by RAF Bomber Command, on 27 February 1945 the Reichsluftfahrtministerium (German Air Ministry) issued a new requirement for a jetpowered, all-weather night fighter, with a top speed of at least 900km/h (559.2mph), a radar installation and heavy cannon armament. Led by Gotha chief engineer Dr Rudolf Gothert the design team at Gotha in Thuringia, central Germany came up with an interceptor which was estimated to be capable of 974km/h (606mph) with a rate of climb approaching 3,500ft per minute. This came courtesy of two Heinkel-Hirth HeS 011-series gas turbines, each developing 2,866lb of thrust, with additional power for take-off and climb coming from a Walter HWK solid-fuelled booster rocket with 4,400lb of thrust. Proposed armament for the P60C was four forwardfiring MK 108 auto-cannon, with three more mounted in the wing to fire upwards. The wingspan was slightly more than 44ft, while weight estimates were 18,500lb when empty and 25,100lb when loaded with fuel and ammunition. Although the 60C was a regarded as a likely winner of the competition, and models had been tested in a wind tunnel, a first flight of the aircraft wasn’t scheduled until the summer of 1945, and it had not even reached the full-size mock-up stage before the German surrender in May 1945. 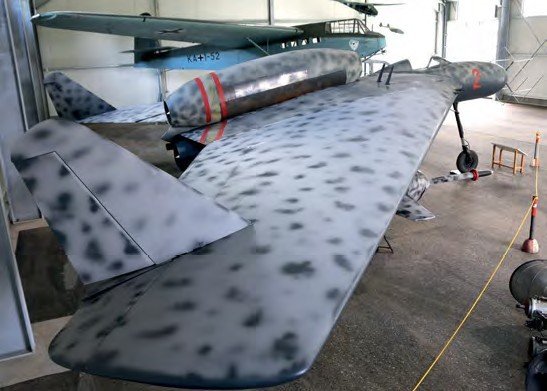 What might have been: the Gotha Go P60C full-size model at Rechlin, with a DFS 230 glider replica in the background.
ANDREAS METZMACHER