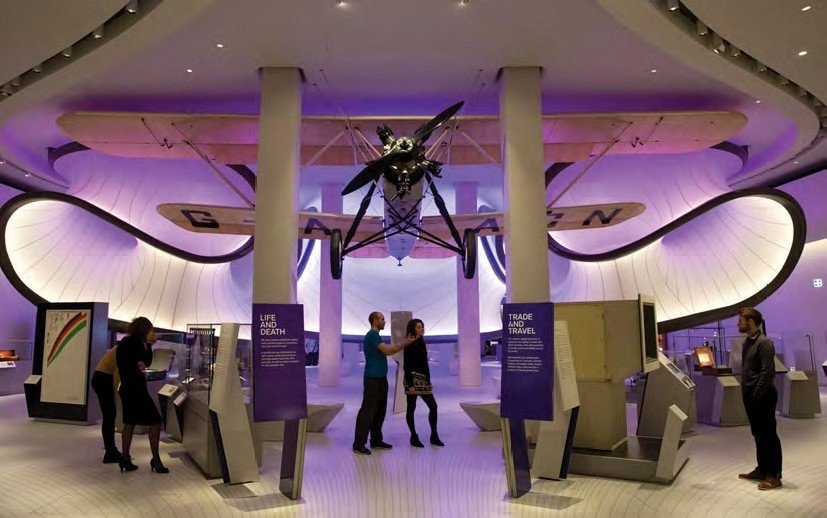 The Handley Page HP39 hanging in the Science Museum’s new Winton Gallery. The name Gugnunc, at first unofficial, came from a baby talk word used by a character in the Pip, Squeak and Wilfred cartoon that ran in the Daily Mirror newspaper.
SCIENCEMUSEUM

A full 82 years after it was presented to the Science Museum, the unique Handley Page HP39 Gugnunc G-AACN went on show in the new Winton Gallery at South Kensington on 8 December. The experimental biplane is suspended in the centre of the gallery, which is dedicated to “the importance of mathematics in our everyday lives.”

The dramatic curving overhead structure and overall layout of the gallery was designed by Dame Zaha Hadid —who died in March 2016 — to represent the field of turbulence created by the wings of the aeroplane, the intention being to demonstrate how mathematical practice has helped to solve real-world problems. The gallery has more than 100 other exhibits on show, including a German equivalent of the Enigma machine.

The HP39 was built specifically to compete in the Guggenheim Safe Aircraft Competition, and made its first flight from Cricklewood aerodrome on 30 April 1929. The 150hp Armstrong Siddeley Mongoose-powered sesquiplane boasted full-span leading-edge slats on both the upper and lower wings, the outer slats on the upper wing being automatic and independent of any other control. The remaining slats were linked to flaps on the trailing edge. When a critical angle of attack was reached, the slats would open and automatically lower the flaps. The aircraft had a speed range of 33-112mph, and a landing distance of just 21 yards.

The competition was devised by the Daniel Guggenheim Fund for the Promotion of Aeronautics, with a $100,000 main prize and five $10,000 secondary awards for aircraft that achieved certain requirements. Among the necessary criteria, competing machines had to be capable of getting airborne from a standing start in 300ft and then clear a 35ft barrier located 500ft from the start point; land over a 35ft obstacle with a maximum 300ft roll-out; demonstrate hands-off stability for five minutes at any airspeed between 45 and 100mph in gusty air; and have a top speed of no less than 110mph.

The contest was to be staged at Mitchell Field, New York, between 30 April-1 October 1927, but of the 27 original entrants only 15 aircraft arrived, the HP39 being the only non-American entry. Three aircraft were withdrawn before flight trials began, a further two crashed in preliminary tests, and eight failed to meet any of the necessary requirements. Only two entries, the HP39 and the Curtiss Tanager, made it to the final stages of the competition, during which members of the Handley Page team noticed that the Tanager was fitted with leading-edge slots of a patented Handley Page design, for which no licence had been obtained. After the Tanager was declared the winner, legal action ensued, and at the end of an 18-month court case Curtiss finally admitted a ‘technical’ infringement.

Meanwhile, the HP39 had returned to Cricklewood for further experimental duties. In October 1930 it was purchased by the Air Ministry and sent to the Royal Aircraft Establishment at Farnborough for official performance testing with the service serial K1908. On 25 October the Gugnunc flew in a display at Croydon alongside the Westland Pterodactyl IV and a Cierva C19 autogyro, the strong wind enabling the formation to fly backwards across the aerodrome. This spectacle proved so popular that repeat performances were staged at several RAF Displays at Hendon. In July 1934 the HP39 was struck off charge and presented to the Science Museum. It had been in storage, latterly at Wroughton airfield, ever since.