Following on from our previous issue where we had a look at the building blocks of a flight plan, this time we are going to go through the tasks that need completing before pushing back from the gate.

Preparing the aircraft at the gate involves several steps, such as setting up the systems, programming the Flight Management Computer and requesting clearance if we are using ATC.

First, we need to get the paperwork ready and generate what is known as an Operational Flight Plan (OFP). We can use several flight planning utilities to create an OFP (see the previous tutorial in issue 112), but for this article I used SimBrief (www.simbrief.com). You can find a copy of the OFP on the download section of the PC Pilot website (www.pcpilot.net/the-magazine/online-content). The OFP contains navigation and performance data, which we need in order to programme the Flight Management Computer (FMC). This includes the departure/destination ICAO codes, route and cruise level. For performance, we need the Zero Fuel Weight (ZFW) and block fuel – this is the total amount needed for the trip, including taxi, trip, alternate and reserve fuel. 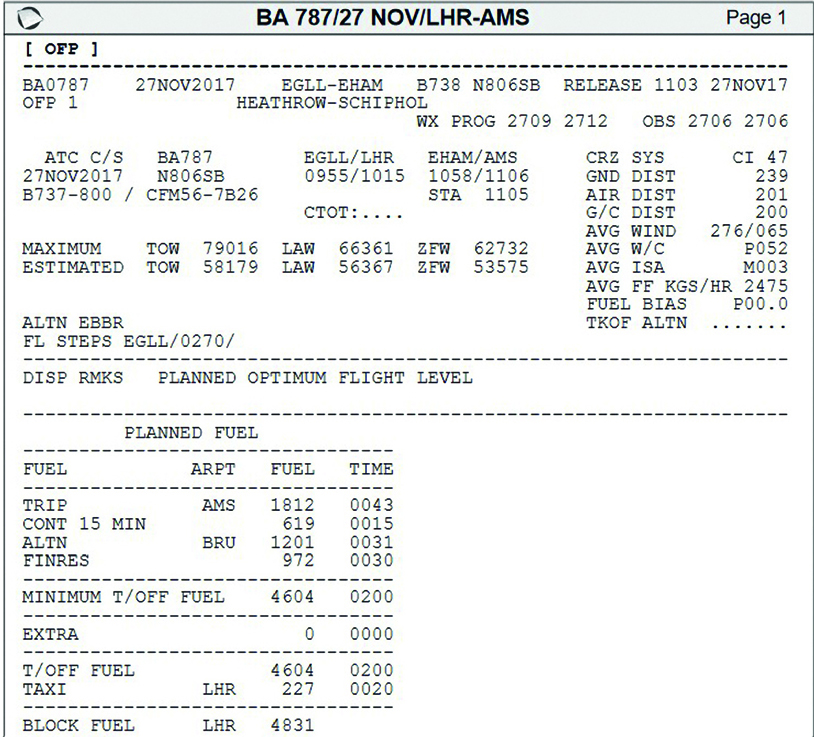 Fig 1: Most of the data required to programme the FMC (Flight Management Computer) can be found on the first page of the Operational Flight Plan (OFP)

We also need to get the weather for the destination and departure airports along with temperature and winds at our cruise level. We usually refer to temperature as International Standard Atmospheres (ISA) temperature deviation. This tells us how much the temperature differs from the ISA standard lapse rate and is used to calculate performance parameters of the aircraft such as fuel consumption, cruise speed and freezing level in case we are likely to bump into icing. SimBrief hooks into real weather and generates forecast data as part of the OFP.

We can pick the route up from the second page of the OFP, including the alternate, in case we need to divert.

Although the Airbus MCDU uses a diff erent methodology from Boeing, the data we need to input is similar. Essentially it is broken down into the following sections: INIT sets the arrival and departure airports, flight level and weights. F-PLN sets the route and SIDs/STARs along with the runway in use. PERF sets the flaps settings, FLEX and thrust reduction/acceleration altitude.

It is also a good idea to check out the weather at our departure and destination airports. Unlike TAFs, which are long-term forecasts, METARS are issued every hour and contain information on the current weather conditions. Sometimes a short-term forecast may be added at the end of the METAR, particularly if the weather starts becoming ‘interesting’. Information in these reports can be exhaustive and it is beyond the scope of this article to cover them in detail, but here is a snippet from the report for Schiphol.

Not a bad day. If you want to learn more on decoding METAR reports, a good source can be found on the following website: www.weatherfaqs.org.uk/node/197.

Before powering up the aircraft, we need to complete the cockpit preparation checks to make sure the aircraft is in a safe state.

With the paperwork out of the way, we can board the aircraft and start preparing for pushback. We start with a cockpit safety or pre-flight check, to make sure the aircraft is in a safe state before powering up the systems.

This involves making sure the gear handle is down and locked, the flaps are up and the spoilers are down. We then do a scan of the overhead panel and make sure hydraulics and fuel switches are off, pressurisation is set, the fuel control switches are off and the thrust levers are at idle. Once we are happy the aircraft is in a safe state, we can start powering it up. This would be a good time to hook up to a ground power source before flicking the master switch on, arming the emergency lights and checking the bus ties are closed. The navigation lights then come on so ground crew know the aircraft is ‘live’. At this stage I wait for the displays to power up and all the systems to complete self-tests before aligning the Inertia Reference System (IRS). In real aircraft, this takes around 10 minutes, but we can set it in the simulator to align instantly or in real time.

While the IRSs are aligning, we can tune to the ATIS (Automatic Terminal Information Service) for the latest weather. If it is the first flight of the day, we may also have to run tests such as fire detection and suppression for the engines, APU and cargo bays, and verify the warning lights and audible warnings are functioning, such as the TCAS and stall warning/sticker shaker. Now we can start turning our attention to the FMC.

The FMC is arguably the biggest hurdle faced by budding virtual airline pilots. First, a quick recap, the Flight Management Computer (FMC) houses the Flight Management System (FMS) and we input data via the Control Display Unit (CDU). Think of the FMS as a flowchart, where we start at the top with the IDENT page, then the POS INIT section, followed by flight planning and then the performance section. Once we have completed all the sections, the CDU pre-flight is complete and we can proceed to the next step.

We can jump between different pages using the INT REF or Index page, but in the following example we will use a typical flow used to programme the FMC. It also has several in-flight pages, which we will cover in a later tutorial.

The IDENT page contains information on the aircraft type and engine rating. It also displays the version of the AIRAC navigational database currently loaded, so we can verify it is up-to-date.

This sets the initial position of the aircraft. During the alignment phase, we enter the ICAO code of the departure airport. We can sometimes enter a gate number for a more accurate position, however, this only works at airports where gates are in the AIRAC database.

We set the initial aircraft position by copying the long/lat coordinates from the left-hand GPS to the scratchpad (this is an area on the CDU where we copy and paste data) and paste it to the ‘Set Inertial Position’ on LSK (Line Select Key) 6R. We can use any GPS or IRS sensor to set the initial position, but many real-world operators use the left GPS in their Standard Operating Procedures (SOPs). After setting the initial position, check the GPS and IRS coordinates match and that these correspond to the gate and/or airport position. 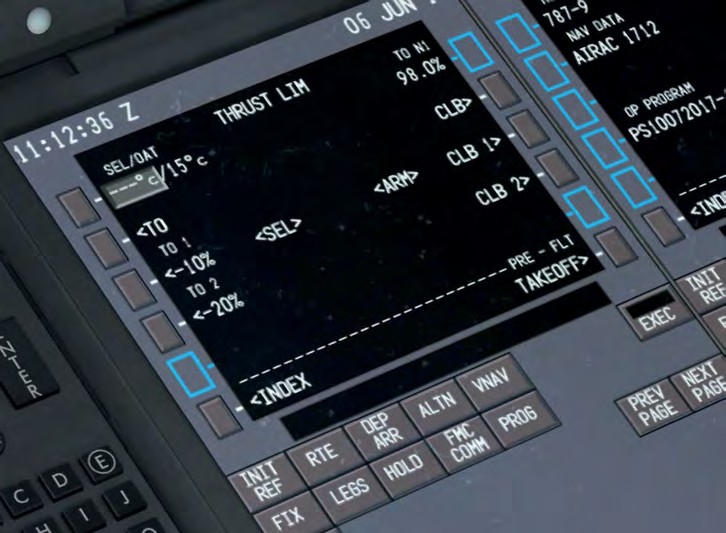 The engines can be derated during take-off. In this example, we have selected 10% thrust reduction.

There are two ways to programme the route. One method is to use a CO ROUTE (Company Route) and the second is manual entry. I would recommend starting with the manual method. It is often necessary to manipulate routes in-flight, for example going direct to waypoint or closing discontinuities (a break in the route) and manual entry will give you a better understanding of how to do this.

The route section consists of two parts (or pages). On the first one, we enter the departure and destination ICAO codes along with the flight number. The second page is where we enter the airways and waypoints. Think of it as being broken down into two columns. On the left we have the airways (entered using the left LSK keys) and on the right, we have the waypoints (added using the right LSK keys). Let’s look at the route:

This is a relatively short sector, so the route fits on the second page. For longer hops, new pages are automatically appended, so for example on a long-haul flight, we might have several pages in the RTE section.

The second method is to import a company route via the RTE page. Most flight planners can export the route to a data file, which we can import for a specific add-on aircraft. The naming convention for company routes is the departure ICAO, followed immediately by the destination ICAO and a version number, or in this case, EGLLEHAM01. 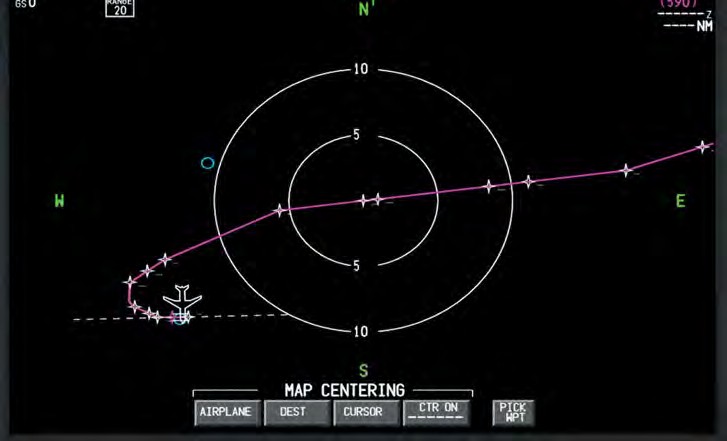 We should check the route for any errors such as discontinuities or incorrect waypoints.

TOP TIP: Rather than entering the waypoints after each airway, we can simply add the airways using the left LSKs and the FMC will automatically add each exit waypoint. For example, after BPK we only need to enter Q295 on LSK2 and L620 on LSK 3 and the FMC will automatically add CLN. We do however need to add the last waypoint on the route (REDFA in this case). This is a great time-saving feature for longer routes, but you still need to verify each entry; sometimes the FMC will pick the wrong exit waypoint.

DEPARR – Departure and Arrival The last part of the route section is the SID and departure runway, entered via the DEPARR page. We will also enter the arrival data from here once we are enroute. In this case we have the BPK7F SID, which we select on the left LSK, and Runway 27R selected via the right LSK. This will basically inject the SID between Runway 27R and the BPK waypoint.

Next up, the performance section - where we enter the ZFW, cruise altitude, the centre of gravity and fuel, including reserves. We can also enter the CI (Cost Index) here. This is a number used to optimise the ratio between the cost of time and fuel to set the most efficient cruise speed. Some flight planners will work out a cost index, which you can pick up from the OFP, but I usually set it to around 100 – we are not paying for the fuel after all.

The thrust limit page is where we input the thrust limits for the take-off and climb segment. Airliners are very overpowered, so operators commonly use reduced thrust during takeoff to increase engine life and save fuel. There are two methods used for reduced thrust take-offs. The first method is to derate the engines or set them to less power than they can generate. Smaller engines generate less asymmetric thrust in case of engine failure, so we can use a lower Vmc (minimum controllable speed with an engine out). This is particularly useful on slippery runways where lateral control is reduced. So, we can increase the take-off weight by using less power. 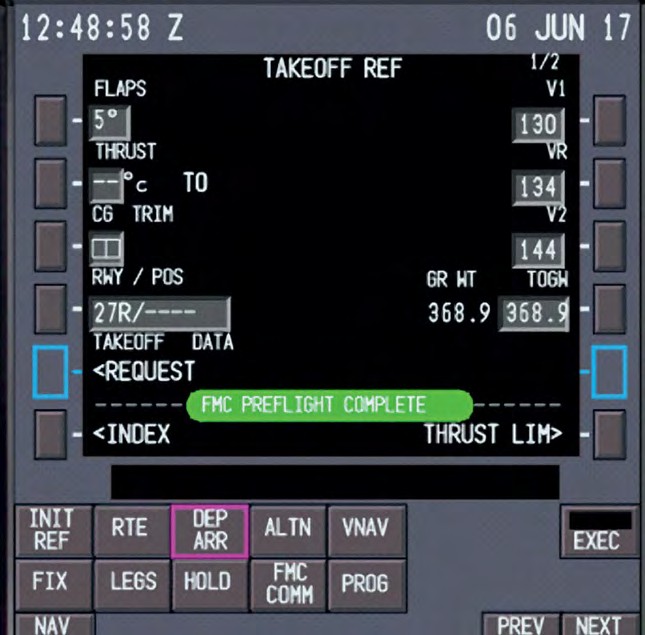 Once we have completed data entry on the CDU (Control Display Unit), we can push back from the gate and start the engines.

Finally, we have the take-off reference page which we use to set the take-off configuration, including the flap and trim settings, thrust reduction altitude and acceleration height. The final step is to confirm the V-speeds, V1 (decision speed) Vr (rotate) and V2 (take-off safety speed). That is pretty much it for programming the FMC; the CDU pre-flight is complete and we can set the Mode Control Panel (MCP) with the initial climb-out altitude (6,000ft in our case), set the heading bug to the runway heading (271 for Runway 27R), and the speed window would be set to V2. We are now ready to push back and start the engines, which we will cover next time.