AIRBUS HELICOPTERS announced on September 25, 2019, that the latest version of its H145 helicopter, fitted with a five-blade main rotor, has landed on Mount Aconcagua in Argentina, at 6,962 metres (22,840ft) the highest mountain in the Southern Hemisphere and also the highest outside Asia.

Airbus Helicopters said this is also the first time a twin-engine helicopter has landed at this altitude.

The H145 is currently undertaking a flight test campaign in the Andes as part of the certification process for the fivebladed main rotor.

The helicopter departed Mendoza, Argentina, and flew to the foothills of Aconcagua before commencing the 15-minute climb to altitude and landing on the summit at 1345 local time at a temperature of -22ºC (-7.6 ºF). The crew consisted of Airbus Helicopters’ experimental test pilot Alexander Neuhaus and experimental flight test engineer Antoine van Gent.

Speaking after the flight, Neuhaus said: “We had to stay focused on the mission due to severe winds with gusts up to 30 knots and the low air density. The aircraft performed outstandingly. We flew over the summit of the Aconcagua and still had power reserves that would have allowed us take two people on-board.”

In total, more than 400 flight test hours have already been flown by the two five-bladed H145 prototypes, with a goal to achieving European Union Aviation Safety Agency (EASA) Type Certification by early 2020, followed by US Federal Aviation Administration (FAA) certification and first deliveries to customers later in the year. Nigel Pittaway 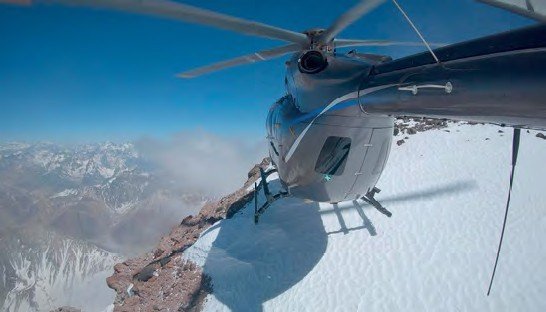