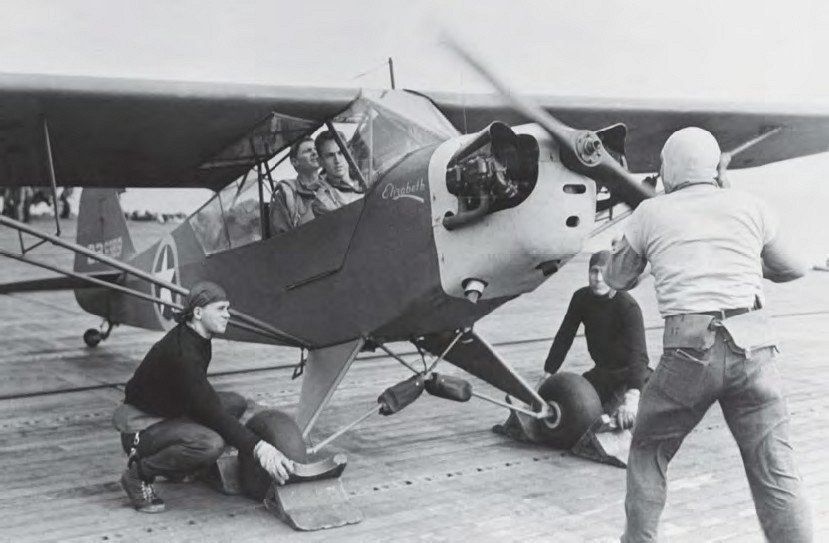 US Army L-4A 42-36389, named Elizabeth, prepares to take offfrom the flight deck of USS Ranger (CV-4) to spot gunfire and carry out reconnaissance near French positions during Operation‘Torch’, the Allied landings in North Africa, during November 1942.
US NAVY

Over recent weeks, the commemorations for those who flew and fought on D-Day have reached their peak, not least the spectacular cavalcade of Douglas DC-3/C-47 variants from Duxford to the Normandy beaches. However, another group of aviators, in my opinion, deserves similar recognition, namely the pilots of the unarmed and unarmoured Piper L-4s that provided vital ‘eyes’ for the artillery immediately following the invasion, and then supported the advance of Allied ground forces.

The American ‘L-birds’, ‘Grasshoppers’, or simply Cubs, were army aeroplanes in the purest sense. They were controlled by the local army commanders on the ground, and were the ideal observation platforms for spotting German armour hidden in the woods around the invasion beaches and subsequently all the way to the Rhine and beyond.

Although other types including Stinson L-5 Sentinels and British Auster AOP aircraft played a significant role, the khaki Cubs were, and still are, the most easily recognised of the wartime military spotter types. They grew out of exercises in the USA which demonstrated that small, manoeuvrable light aircraft, able to fly from any reasonably smooth area of pasture, could provide more effective support to ground troops near the front line than larger, heavier, army cooperation types.

“In the words of Bill Piper Jr,‘All we had to do was paint the Cub olive drab to produce a military airplane’”

They were also a lot cheaper and a great deal easier to build. In the words of Bill Piper Jr, the son of the company owner who flew a Cub in the evaluation trials, “All we had to do was paint the Cub olive drab to produce a military airplane.”

Cub production was already at an eye-watering level before US Army operations began. From 1939 it became the primary trainer of the US Civilian Pilot Training Program, creating a reserve of future military pilots. During 1940 alone, 3,016 Cubs were built to satisfy demand. By the war’s end, 80 per cent of US military pilots had learned to fly in the Piper machine.

US Army pilots were specifically trained in their low-level role at the US Field Artillery School at Fort Sill, Oklahoma. Between August 1942 and the end of the war in Europe, the school trained 2,769 liaison pilots and 2,269 airplane mechanics. They were accompanied into action by a total of 2,788 Cubs, initially shipped into Manchester and Liverpool docks, and then assembled at Warton in Lancashire before being assigned to their artillery units.

Later, RAF Grove in Oxfordshire became ‘Cub central’. The aircraft arrived in Avonmouth, often as deck cargo on oil tankers, and then were shipped to the Oxfordshire base either by 6 x 6 truck or on the nearby Great Western Railway. In the build-up to D-Day the aircraft were unpacked, checked and transferred back onto trucks, which were in turn loaded onto landing craft. On arrival at the beach-head, the truck driver, a pilot and a mechanic would find a suitable flying field and rapidly assemble the aircraft, often under fire.

As increasing numbers of ‘Cub strips’ were established in newly liberated territory, the L-4s were assembled at Grove and flown to France non-stop. A typical flight took around three hours, well beyond the normal endurance of the type, but a solution was found in the form of modified aircraft oxygen tanks, filled with fuel and mounted in the top of the cabin, feeding the main fuel tank by gravity. On arrival the supplementary tank was removed, and once a week they’d be shipped back to Grove in the hold of a C-47.

The ‘Grasshoppers’ continued their sterling and heroic work to the war’s end, before finding another role. In common with a lot of other US surplus military equipment, there was no incentive to ship them home, so survivors were simply donated to flying clubs across Europe, where they helped re-establish sport flying. In latter years their simplicity has enabled many private owners to embark on restoration projects, and even today I can testify that a ‘Grasshopper’ is one of the most affordable — and fun — ways of enjoying a warbird experience.