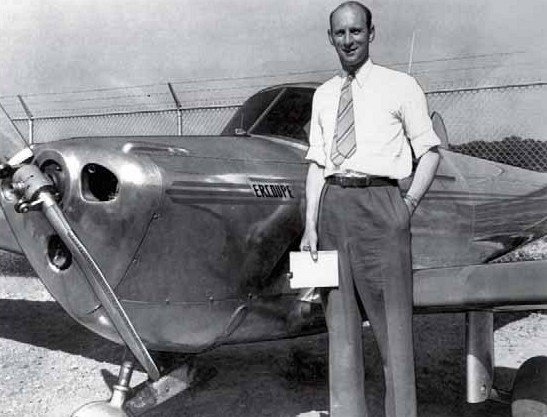 Familiarity, they say, breeds contempt. In the case of the ubiquitous Piper PA-28 Cherokee that may be an exaggeration, as since its maiden flight in January 1960 it has become the world’s most successful training aircraft. It is still in production and, to date, almost 33,000 examples of the type have been built.

If the Cherokee is an unsung hero, maybe even more so is its designer. Fred Weick was a personal friend of Orville Wright, a barnstormer, a ground-breaking researcher into aerodynamics, wind tunnel design and low-drag engine cowlings. He penned an unspinnable light aircraft and developed the first purpose-built crop-duster, before being invited by Piper to design the most successful aircraft in its history.

Born in Illinois during 1899, Weick studied mechanical engineering at the University of Illinois and in 1922 joined the fledgling US Air Mail Service as an engineer. A year later, he learned to fly with a barnstorming operation and, like many of his contemporaries, cut his teeth on the Curtiss JN-4D ‘Jenny’. His first solo flight came at the end of a barnstorming tour, when the company was left with one more aircraft than available pilots. Fred was simply told to take over an aeroplane and follow another pilot home.

“It is said that no Ercoupe has ever been lost in a stall-spin accident. About half of the 6,000 built are still flying”

Weick then joined the Navy Bureau of Aeronautics in Washington DC, working closely with the scientists of the National Advisory Committee for Aeronautics (NACA), which he joined in 1925. He developed the ‘NACA cowling’ which surrounded the previously uncowled radial aircraft engines of the period, reducing drag and enhancing cooling.

Among the first applications of the new cowling was the Travel Air Type R ‘Mystery Ship’ racer of 1929. The aircraft made its debut in the Th ompson Trophy, the top air race of its day, where it handsomely beat both US Army and Navy fighters despite its pilot having to circle after cutting one of the course pylons. The NACA cowling and derivatives went on to be used on almost every highperformance radial aircraft.

In 1936 Weick was asked to create an all-new light aircraft for the Engineering and Research Corporation, Erco. The two-seat, all-metal, low-wing Ercoupe featured a then-revolutionary steerable nosewheel undercarriage and was designed to prevent stalling and out-ofbalance flight. It was the first light aircraft to be certified as spin-proof and it is said that, even today, none have ever been lost in stall-spin accidents. About half of the 6,000 Ercoupes built are still flying.

Weick’s next design, in contrast, was designed to be crashed. In a bid to reduce the number of fatal crop-dusting accidents to converted aircraft such as Boeing Stearman Model 75s, he created a bespoke aeroplane which was developed to become the Piper PA-25 Pawnee. The design incorporated a steel-tube ‘safety cage’ protecting the pilot, while the engine mounts were designed to shear off , leaving the engine below the pilot in a crash. Such was the success of the Pawnee, both in terms of sales and in reducing ag pilot casualties, that in 1957 Piper asked Weick to join the company as its chief engineer. The rest, as they say, is history.

The all-metal Cherokee was not just attractive and easy to fly. It was cheaper to make than the fabric-covered high-wing designs which then were the mainstays of the Piper fleet. The original ‘Hershey Bar’ parallelchord wing of the early PA-28s was produced using identical wing ribs, significantly reducing tooling costs. Weick even helped design the Vero Beach factory in Florida where the new aircraft was to be built.

He died on 8 July 1993, but the story isn’t over yet. Since that maiden flight six decades ago, Cherokee variants have ranged from 140 to 300hp, fixed and retractable gear, and four to six seats. A new training variant was announced in early 2019, so Weick’s most successful design is set to remain in production for some time to come.