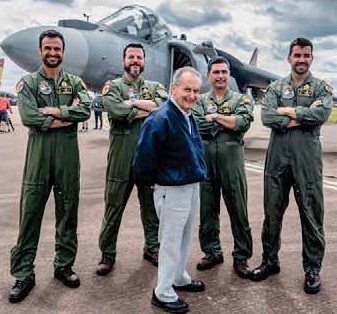 The visit of two Spanish Navy EAV-8B Harrier II+ jets to RIAT 2019, where they gave unique two-ship displays, allowed pilots of the V/STOL aircraft from across the generations to meet in the 50th anniversary year of the type entering service, with No 1 Squadron, RAF in 1969. Sqn Ldr Tom Lecky-Thompson, who set the fastest London-New York time in the Daily Mail Transatlantic Air Race 50 years ago, met the Spanish pilots from Escuadrilla 009 at Rota who flew the EAV-8Bs. One of them, squadron boss Cdr Manuel Rodríguez Giner (second from right in the photo above), made his final Harrier flight on the Sunday of the Fairford show. BD