AFTER 24 years, Hawker Restorations has outgrown its base at Milden in Suffolk, and during early April completed a move to a purpose-built facility at Elmsett near Wattisham. The world-renowned company has been responsible for 80 per cent of all restorations relating to Hawker Hurricanes, but previously had to use road transport to position restored aircraft for testing and flying. This will no longer be the case as the new facility boasts a 900m (2,950ft) runway and lights, and is within the ‘panhandle’ of the Wattisham military air traffic zone.

The 6,500-square foot hangar contains a machine shop, storage area and a soon-to-be-completed spray bake facility. Hawker Restorations has previously worked on a range of war birds including the Corsair, Spitfire, Wildcat, a series of Yak-11s and a Yak-1. This is an area the company intends to explore further alongside the restorations of Hurricanes. 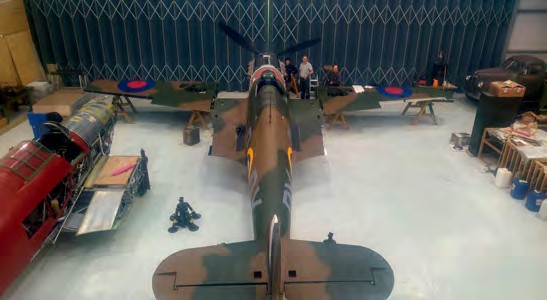 Hurricane I P2902/G-ROBT, with V7497/G-HRLI on the left, in the new Hawker Restorations building at Elmsett in late April.
HAWKER RESTORATIONS

The first aircraft to fly from Elmsett will be Hurricane I P2902/G-ROBT, an ongoing restoration for many years. Previously owned by Rick Roberts, it is now owned by Anglia Aircraft Restorations. Completion of P2902 and a maiden flight should be accomplished by the end of May. The fighter will finally be positioned at Duxford. The next Hurricane to get airborne will be the jointly owned Battle of Britain veteran Hurricane I V7497/G-HRLI, which is anticipated to fly towards the latter part of 2017.

An original SE5a, C8996, is progressing well and should be complete towards the end of the year, fitted with an original Hispano-Suiza engine. It will be one of three genuine SE5as flying worldwide.