Heads up: Daks over Normandy

Ludo Mennes and Frank Visser spoke with Peter Braun, event director of this year’s Daks over Normandy initiative to commemorate the 75th anniversary of D-Day 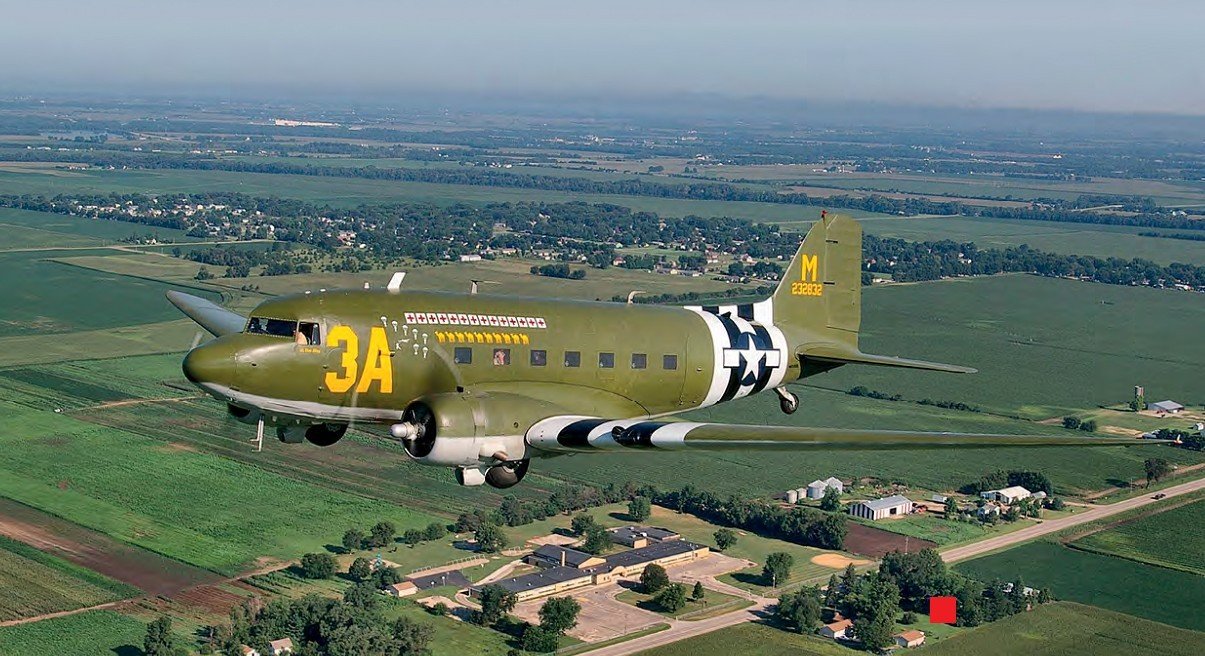 One of the many Dakotas that will take part in the big event to commemorate the 75th anniversary of the heroic D-Day operation.
Paul van den Berg/Daks over Normandy

IN THE night of June 5, 1944, 75 years ago, around 22,000 American, British and Canadian paratroopers boarded transport aircraft and gliders for one of the largest airborne operations in history. Under Operation Overlord, allied airborne forces had the crucial task of securing the flanks and approaches of the landing beaches in Normandy. D-Day marked the beginning of the Nazi defeat.

In June 2019 the world will commemorate the heroic D-Day operation probably for the last time on such a large scale as the last eyewitnesses gradually pass away.

Part of the commemoration activities is a private initiative known as Daks over Normandy, which is seeking to gather around 40 Dakota transport aircraft from all over the world, in France. AIR International spoke to the initiator Peter Braun.

The concept of Airborne operations dates back to the 1930s when several countries such as Germany, France and the Soviet Union started experimenting with dropping soldiers and material from aircraft.

During World War Two the fighting nations made intensive use of paratroopers in battles. The Nazis were first to use large scale airborne operations; in The Netherlands in May 1940 and the island of Crete, Greece in May 1941. As both operations resulted in heavy losses of men and material, Hitler decided to employ his paratroopers as ground troops.

During the D-Day invasion, British and Canadian paratroopers of the 6th Airborne Division had to secure the eastern flank (Sword Beach) in Operation Tonga. Around 8,500 men were deployed in at least 335 different transport aircraft ranging from the Douglas Dakota and Short Stirling, to the Handley Page Halifax and Whitworth Albemarle. The British forces were mostly dropped over their landing zones and successfully accomplished their missions.

Due to bad weather, enemy anti-aircraft fire and bad navigation most of the American troops missed their intended drop zones. However, the wide dispersal of troops and consequential hit and run actions of the paratroopers distracted the Nazi commanders’ attention away from the landing beaches and fragmented their response.

The main workhorse during the operation was the C-47 Skytrain or the Dakota as it was named by the Royal Air Force. The aircraft had a cruise speed of 139kts (257km/h) and a range of 1,390 nautical miles (2,575km). With a crew of four (pilot, co-pilot, navigator and radio operator), the Dakota was capable of transporting 28 troops. However, during D-Day an average payload was 16-17 airborne troopers with full gear and armament.

A total of 10,174 aircraft were built in factories at Long Beach and Santa Monica, California and Oklahoma City, Oklahoma.

General Dwight D Eisenhower, Supreme Commander of Allied Forces in Europe, termed it one of the most vital pieces of military equipment (together with the Willys- Overland and Chrysler 4x4 ¼ ton truck dubbed the Jeep, and the GMC 6x6 2 ½ ton truck dubbed Jimmy) used for winning the war.

On June 5, 2019 the famous C-47 is set to once again return to Normandy; the historic airborne landing operation will be commemorated by a flight of around 40 C-47s. They will retrace the original flights from Britain and release around 350 paratroopers from 18 aircraft over the original D-Day drop zones using round-type parachutes, as used in 1944. The flight and drop will be a salute to the brave men who fought for the freedom of Europe and honour the ones who paid the ultimate price. 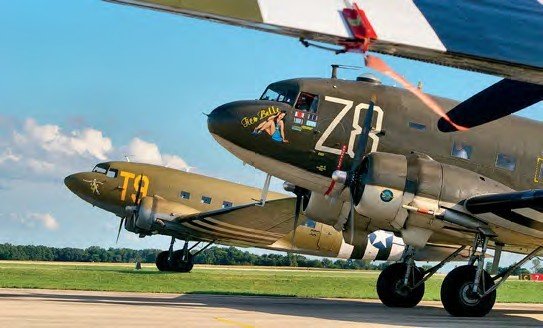 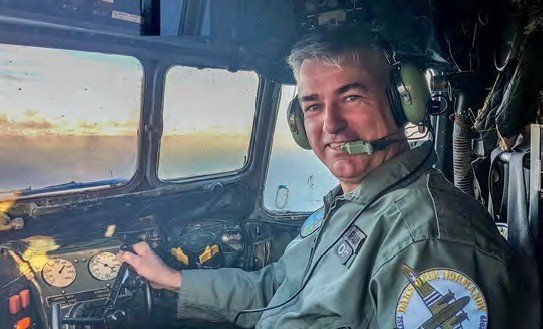 The initiative for the commemorative flight was taken by Daks over Normandy Limited. Event director and founder Peter Braun explained: “The initial idea of Daks over Normandy originates back to 2013 when the name, logo and intellectual property were registered. In 2014, I co-organised a similar but much smaller event in Normandy with nine Dakota aircraft. Then in 2015, I wrote an event plan for the commemoration in 2019 resulting in what we have today.

We are currently working on forming a registered charity called the European DC-3 Society, which has the goal to unite all flying and airworthy DC-3s in Europe, and help them in the future with procurement of spare parts, maintenance and pilot training. For sponsors it offers the advantage of tax deduction possibilities and for us possible access to government support and grants.” Skytrains and Dakotas from all over Europe and North America will gather at Duxford Airfield, Cambridgeshire, their base from June 2 through June 5. Two Dakotas from Russia will also participate.

Different festivities, both on the ground and in the air, will take place during the first two days: from demo flying, re-enactment activities to para drops. On June 5 the armada will recreate the original D-Day crossing, and fly over the drop zones in Normandy around 4.30pm local time, after which they will land at Caen-Carpiquet Airport. The aircraft will remain at Caen until June 9 and take part in commemorative activities in the presence of D-Day veterans.

The crossing cannot be made on June 6 because of a no-fly zone in place for the official commemoration, which will be attended by many heads of state including President Trump.

The veteran Skytrains and Dakotas will assemble at Waterbury-Oxford Airport, Connecticut and start their journey from May 19 2019. The American contingent is named the D-Day Squadron and currently consists of 18 aircraft. The D-Day Squadron will fly the route in three groups because the airfield used in Greenland is only capable of handling a maximum of eight aircraft at the same time.

An initiative of this magnitude requires a lot of planning and a lot of funding. Daks over Normandy Ltd consists of a three-person management team and a core group of eight members responsible for aircraft handling, planning, social media and fundraising. Furthermore, a large group of volunteers is supporting the venture in many different ways.

Braun himself said: “I have my own consulting company in the Netherlands, but this project takes up so much of my time that I have been working on it fulltime for the last two years. The planning requirement is a tremendous undertaking with so many aircraft and crew attending and different things to take care of. However, it is worth every minute as it is a once in a lifetime event!”

At the same period as the Skytrains and Dakotas visit Normandy, the allies will officially commemorate and participate in different activities. On June 4, the British 16 Air Assault Brigade will perform a large para drop at the former dropping zone ‘N’ near Ranville and Pegasus Bridge, and on June 9 the Americans will perform a massive para drop near Sainte-Mère-Église; Cherbourg-Maupertus Airport will be the centre of the air operations.

The modern equivalent to the Dakota is Lockheed Martin’s C-130 Hercules, an aircraft capable of operating from rough, dirt strips and the primary transport for para dropping troops and equipment. Equipped with an aft loading ramp and door, the C-130 can transport a wide variety of cargo and troops.

For a para jump the C-130 is equipped with removable canvas seats on both sides of the fuselage and in the middle of the cargo hold. Today’s in-production version is the C-130J which climbs faster and higher, flies farther at a higher cruise speed, and takes off and lands in shorter distances than legacy Hercules aircraft.

Operated by three to five crew depending on the mission, the C-130J is capable of transporting either six large pallets, 92 combat troops or 64 paratroopers. The extended C-130J-30 version can fly up to 92 paratroopers, which means that only a third of the fleet of C-47s used on D-Day would have been necessary. Even by today’s standards a simultaneous airlift of 300 C-130Js would be a breathtaking sight. AIR International will cover this summer’s D-Day commemorative events featuring Dakotas, Skytrains and Hercules.

Event organisers continue their fundraising effort to reach the 2 million GBP target. All financial support is welcome, and readers can donate at https://www.daksovernormandy.com/donate/