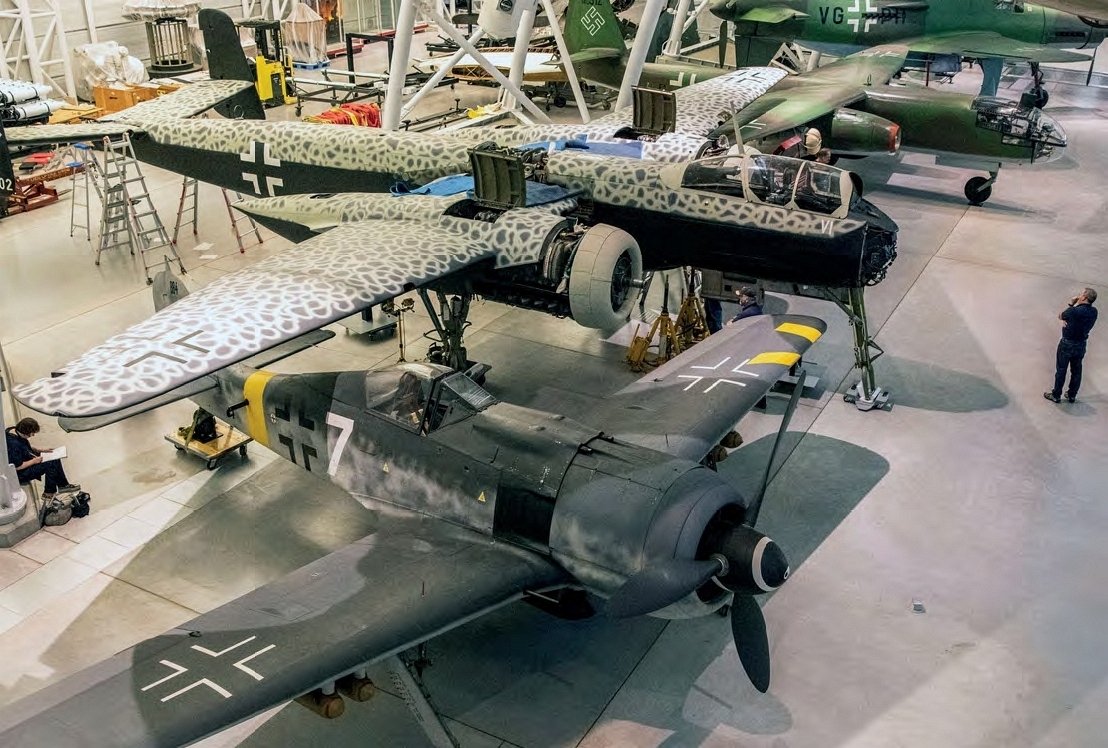 Pictured at the Udvar-Hazy Center soon after its wings had been attached on 15 August, the NASM’s Heinkel He 219 shares space with two other aircraft taken to the USA on HMS Reaper in the shape of the world’s only surviving Arado Ar 234, Werknummer 140312, and Dornier Do 335, Werknummer 240102. Focke-Wulf Fw 190F-8/R1 Werknummer 931884 is in the foreground. ALEX SPENCER

The world’s only Heinkel He 219 received its long-awaited wings during mid-August in the National Air and Space Museum’s Udvar-Hazy Center at Dulles Airport, Washington DC. The 63ft-span, 5,000lb wings had been painted at the Mary Baker Engen Restoration Hangar at Udvar-Hazy back in 2014, and the fuselage has been on show in the museum’s main building for several years. Although there is still a lot of detail work to complete, including hooking up the wiring, hoses and other fittings, the installation of ailerons and cowl flaps, and the hanging of propellers, the menacing machine is now in its final public display position.

The Heinkel, Werknummer 290202, was operated by Nachtjagdgeschwader 1. At the end of the war it was captured at Grove airfield in Jutland, Denmark, and became one of three examples of Germany’s only dedicated night fighter aircraft to be shipped to the USA. It was flown to Cherbourg and loaded onto the escort carrier HMS Reaper along with 20-odd captured German aircraft.

Upon reassembly in the USA it was flown to Freeman Field, Indiana for testing and given the foreign equipment number FE-614. It later received another identity, T2-614, and during 1946 went into storage in an empty former aircraft factory at Park Ridge, Illinois. The He 219 was signed over to the Smithsonian in 1949, and was lucky enough to survive until early 1955 when it was crated and moved to the museum’s storage facility at Silver Hill, Maryland. Following the outbreak of the Korean War in June 1950, several captured enemy aircraft stored at Park Ridge were scrapped, the space being needed to house material during that conflict. Restoration of the Heinkel finally began at Silver Hill in 2001.

The nose-mounted antennae for the Lichtenstein SN-2 advanced VHF-band intercept radar went missing during the Heinkel’s stay at Freeman Field, so a set was borrowed from the late Paul Allen’s Flying Heritage and Combat Armor Museum at Everett Field, Seattle, and used as patterns for a set of reproduction aerials that were built by NASM staff.

There is still a lot of detail work to complete, but the He 219 is now in its final display position.

For more projects like this visit our historic aircraft restoration news section.