Herald nose to move to Morayvia

Twenty years after Handley Page HPR7 Herald G-ASVO was written off after a taxiing accident at Bournemouth Airport, the surviving forward fuselage section is scheduled to be moved during March from the Highland Aviation Museum at Inverness to Kinloss, Moray, where it will go on display at the Morayvia Sci-Tech Experience.

The aircraft made its maiden flight on 2 July 1964. That November it was sold to Brazilian airline SADIA, and from the mid-1970s ‘did the rounds’ with many UK-based Herald operators: Air Anglia, British Island Airways and Air UK. The machine is thought to have carried 20-odd colour schemes, the last being that of Channel Express. On 8 April 1997, ‘SVO suffered extensive damage to the port wing when it was taxied into a floodlight at Bournemouth. Repairs were considered uneconomic, and it was scrapped. 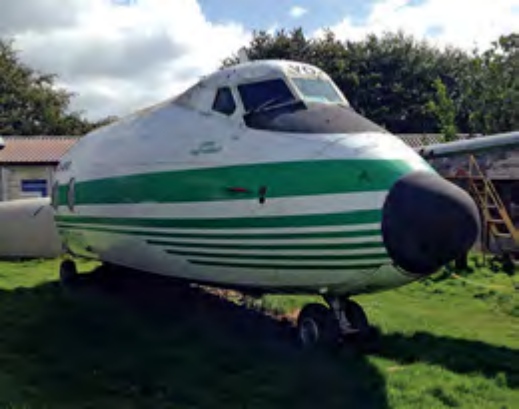 The nose of Herald G-ASVO is soon to move.