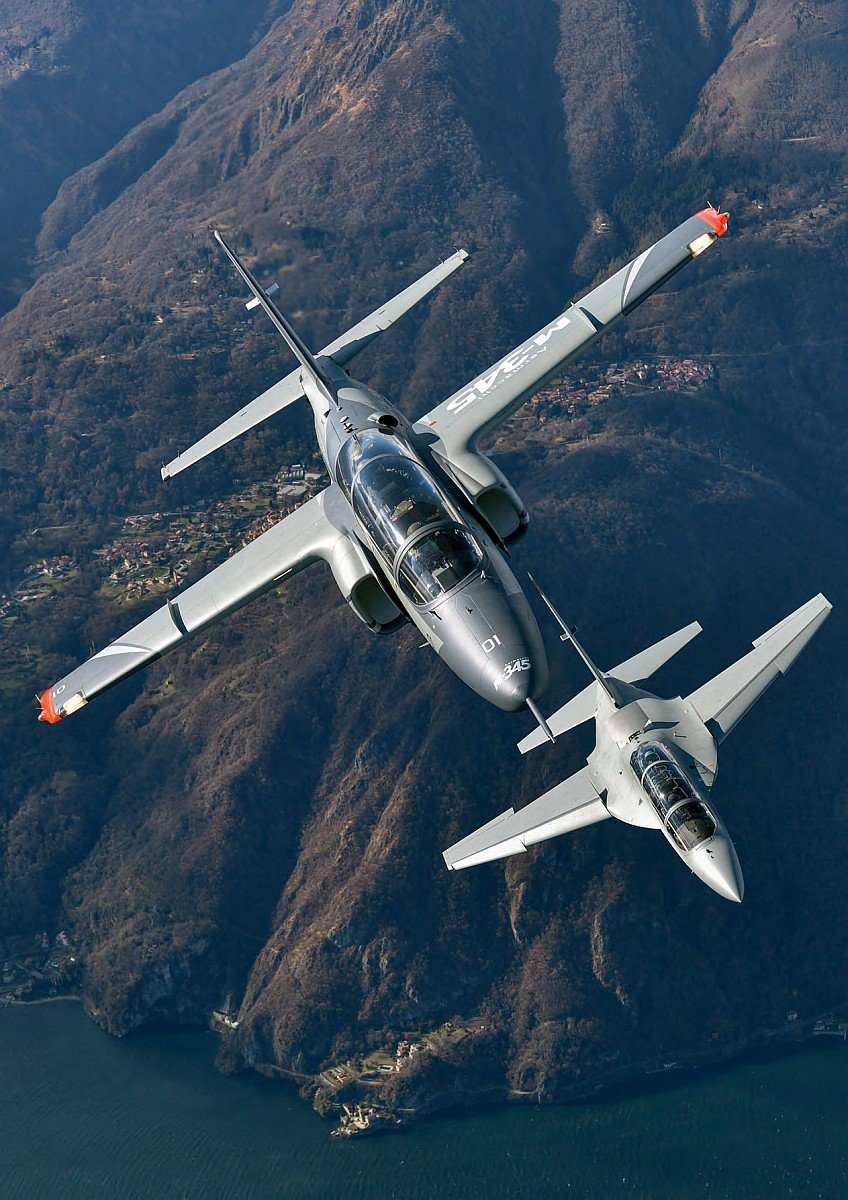 Leonardo’s M-345HET in formation with a M-346 Master.
All photos Leonardo 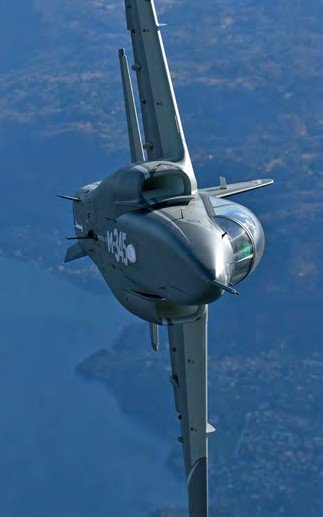 Launched by Alenia Aermacchi in 2012 as a successor to the MB.339A in service with the Aeronautica Militare (Italian Air Force), the M-345 HET (High Efficiency Trainer) has received its first domestic order and is set for promotion on the international market.

The M-345 is based on the M-311 design, a development of the SIAI-Marchetti S.211A that participated in the US Joint Pilot Aircraft Training System competition in the 1980s, but was beaten by the turboprop Raytheon T-6A (an American version of the Pilatus PC-9), mainly for budgetary reasons. In spite of its low sales (61 aircraft were produced), the S.211 was a sound trainer and quite advanced for the period. Reasons why Leonardo Divisione Velivoli has revitalised the basic design with the latest equipment as a state-of-the art trainer dubbed the M-345.

The M-345 may look very similar to the S.211, but in reality the M-345 has been completely reconfigured. The engine and avionics are new, and on-board systems and production processes have changed.

Leonardo believes the needs of training military pilots requires a modern manmachine interface, advanced planning, debriefing and embedded simulation systems. Basic trainers must have sufficient specific excess power to allow the aircraft to maintain 3g at 300kts (km/h) at 10,000ft (3,000m), maintain at least Mach 0.55 at low-level in a flight regime up to 2g, the ability to fly at high speed and altitude, and employ simulated weapons. Only a jet trainer - they say - can meet all such requirements.

Leonardo’s philosophy for the M-345 is to provide a jet trainer with procurement and operating costs similar to an advanced turboprop, so the design is intentionally straightforward. All components are simple in order to compete with a successful competitor, the Pilatus PC-21.

M-345 programme representatives believe they have matched the PC-21’s design simplicity and operating costs with the advantage of a performance envelope only matched by other jet-powered trainers. Furthermore, Leonardo also believes the M-345 will be able to provide training to student pilots in flight regimes close to those flown during pre-operational training, the so-called lead-in fighter training phase. In addition, Leonardo expects the M-345 to provide student pilots destined for front-line fighters with the high-speed required to reduce timing and thereby force students to fly with quicker reaction times.

Differences in operating the M-345 will come from the new avionics, new turbofan engine and a new maintenance philosophy. Leonardo expects to offer future M-345 customers a near 50% reduction in operating costs compared to the MB.339.

Though not a requirement of Leonardo’s launch customer, the Aeronautica Militare, the M-345, like the S.211, will be able to employ weapons: an attractive capability for potential customers, one born from the download concept of providing highquality training at cheaper costs, which is the fundamental concept of procuring and operating an advanced training system. Basic fighter manoeuvring, is one pre-operational training task that’s made possible by the download concept designed into the M-345’s training system. Other pre-operational training tasks that can be downloaded to the M-345 include low-level navigation and tactics, flying basic attack and basic intercepts.

Key elements that enable the M-345 to achieve such tasks are a cockpit similar to those of ghter aircraft with NVG compatibility, excellent outside visibility, a large flight envelope with low-level manoeuvre capability, a stable re platform, low radar, infrared, acoustic and visual signatures. The M-345 offers a wide range of stores and weapons carried on four pylons for a maximum payload up to 1,200kg (2,643lb).

In designing the M-345, Leonardo’s engineers have made modi cations to the M-311’s external mould-line. The main examples are a longer nose and new engine air intakes. The cockpit and canopy are slightly different in form on pre-series production aircraft to accommodate the new Martin Baker Mk16 ejection seat as used on the M-346 Master.

Compared to the series production standard S.211 model, for industrial reasons the aircraft was completely redesigned to create the M-345 using CATIA 5 CAD-CAM software systems and features parts produced using digitally controlled machining. The balance between metal and composite parts is the same as the S.211; panels and sections in the nose, air intakes, the aft section and dorsal spine are all made from composite materials.

The airframe features damage tolerance design criteria, lightning protection, reinforcement of composite panels and structural bonding of skin, doublers and stringers. Like the M-346, the M-345 will be equipped with a health monitoring system that monitors fatigue and stress levels of the airframe, and avoids the need for general third-level overhauls or depot inspections. Operational inspections are required every 150 hours and intermediate inspections every 600 hours. The airframe’s useful life is 15,000 hours or 30 years of service, including 60,000 landings, or touch-and-goes. In day-to-day operations, Leonardo has yet to release any turnaround times, but aims to keep them quicker than the M-346, which is about 30 minutes, and performed by one technician.

Leonardo selected the Williams FJ44- 4M-34 turbofan, the latest version of the engine, which offers unrestricted inverted flight. The FJ44 engine was certified by the Federal Aviation Administration in 2010, over 4,600 are in service, with more than six million flight hours already logged.

Originally designed for civil and commercial aircraft, the 4M version has been produced speci cally for military and aerobatic use.

Delivering 3,400lb (15.17kN) of thrust, the FJ44-4M has a speci c fuel consumption of 0.51kg of fuel per hour-kg of thrust, and a time between overhaul (TBO) of 3,500 flight hours. Leonardo adopted a slightly less powerful version of the FJ44 engine, because it stays cooler and is therefore less stressing and provides a longer TBO. Williams offers a very ef cient support programme at a customer’s operating base, which includes several activities, including those coming from FOD ingestion, with a philosophy similar to those adopted in the civil sector.

The fuel system comprises a wing tank and a fuselage tank, both integral, and fed by a single refuelling point, for a total of 700kg (1,542lb). Two of the inner pylons are wet, for 265-litre (60-gallon) auxiliary tanks. 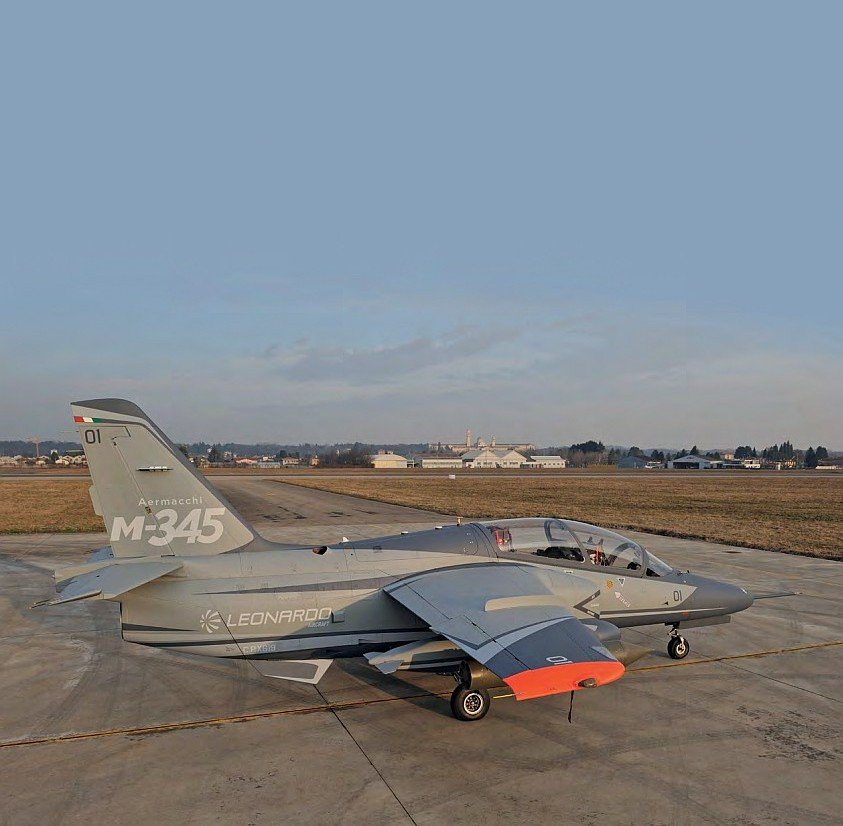 Despite the Leonardo branding, appropriately the M-345 demonstrator retains the Aermacchi name on the tail. A sure way to advertise its pedigree. This aircraft, serial number C.P.X619, was originally built as a M-311.

The M-345 could be labelled as a marketing concept, destined to rescue an old (and scarcely successful) project, recycled for the domestic customer; but is that a fair judgement? Possibly not. The S.211 was penalised in its marketing above all because the type was never adopted by the Aeronautica Militare, a factor that discredited it with potential export customers. When the S.211 was launched, the Aeronautica Militare had already ordered 100 Aermacchi MB.339s, making an order for an aircraft for the same role practically impossible to place. At the time, the 1980s, political support to armament export sales by successive Italian governments was non-existent. The author had the opportunity to fly the S.211A in 1989, during the US Joint Primary Aircraft Training System competition (AIR International published a report in its December 1989 issue). During the flight, the aircraft looked to be conceptually and technically more advanced than the MB.339A.

The M-345 comes with embedded simulation giving it one advantage over its competitors and its ability to compete with turboprop trainers in terms of costs; the unit cost and operating costs. Such competitive advantages may drive sales of the M-345 to match the numbers achieved by its predecessor, Aermacchi’s MB.339, but timing could be a critical factor that could work against the M-345 if the programme’s development is delayed. Otherwise, competitors could meet the delivery timeframes required by trainer competitions around the world free of the style of development programme that has to be undertaken for a new type. 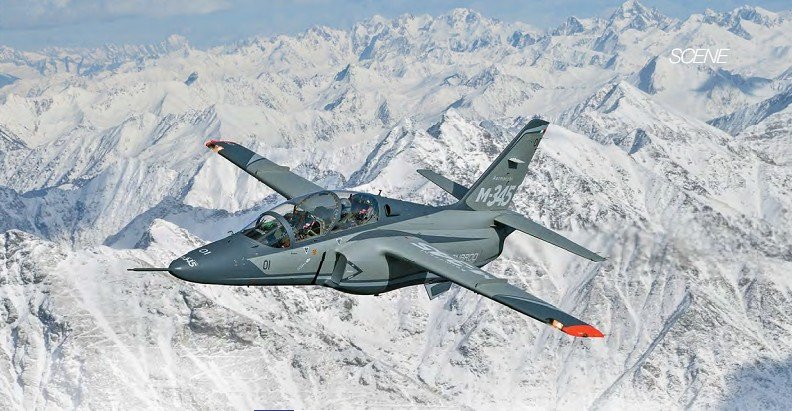 This shot clearly shows detail around the longer nose and new engine air intakes; modifications made to the former M-311’s external mould-line.

A new oxygen system formed by an on-board oxygen generating system with an emergency back-up system is the same system used on the M-346.

Mechanical ight controls were reviewed and the hydraulically powered ailerons (as per the S.211) were optimised, and the aps and yaw dumper on the rudder run on electrical power.

The forward and aft cockpits have the same layout as the M-346, with HOTAS controls, three colour 5 x 7in (127 x 177mm) multifunction displays, and a raster/stroke head-up display (HUD). In the aft cockpit, the HUD is replaced by a repeater screen.

The Leonardo Divisione Elettronica’s avionics suite is a development of the suite used in the M-346 and also includes embedded GPS/INS, radar altimeter, two VHF/UHF radios, an IFF transponder, a digital moving map, radio-aided mode, based on TACAN and VOR/ILS, voice command. Specifically, M-345 aircraft delivered to the Aeronautica Militare will be equipped with the Stormscope lightning protections system.

Visibility from the cockpit is excellent in all directions, including forward and downward, the field of view from the front cockpit extends to -15°. Ergonomic specifications of the cockpit (which follow the guidelines of a US Air Force standard) make it suitable for 99% of male and 94% of female pilots.

An environmental control system allows the cockpit temperature, pressurisation and windshield demisting to be adjusted. 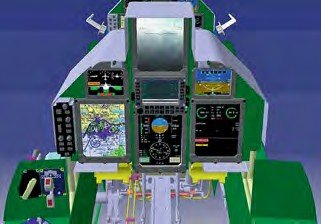 For in- ight simulation, the system includes a mission planning and debriefing station (MPDS), which is used to prepare mission scenarios, load and download all the data to and from the data transfer module (DTM), and to review and analyse the mission during debrief. The DTM is used to upload information and data, such as simulated targets, interactions with other pilots’ in- ight, simulation of the presence of radar, weapons and electronic warfare systems in the aircraft.

The embedded simulation capability can be used in standalone mode for single aircraft training missions, which can be enriched with a series of systems and events, or integrated in the ETS with actions from pilots ying other aircraft, or who are ying in other simulators. All other players can interact with each other in real time through the datalink. The system’s simulation capabilities are extensive such that complex scenarios can be created.

Leonardo believes such capabilities will be appreciated by air forces that do not operate advanced trainers, enabling them to exploit the ETS on an M-345 before transferring their student pilots on to frontline fighters.

The M-345’s ground-based training system is based on a series of aids that start with computer-aided instruction and computer-based training, and move on to basic simulators, plus MPDS, good for real-time monitoring. The latter system is also useful because it allows students increase their experience by following who is in ight.

Though unlikely because of the expansive nature at this level of training, Leonardo can provide a full mission simulator if a customer requires that capability.

According to Leonardo, several air forces have shown interest in the M-345. The fact that the company’s domestic customer, the Aeronautica Militare, has already placed an order helps marketing campaigns.

On January 13, 2017, ARMAEREO (the Italian military aviation procurement agency) signed the first contract for five M-345 HET aircraft. The Aeronautica Militare’s plan is to re-equip 213° Gruppo, part of 61° Stormo tasked with basic jet training at Lecce Air Base, and 313° Gruppo, the operating squadron of the Frecce Tricolori national aerobatic team, based at Rivolto Air Base. The Aeronautica Militare’s total requirement should be around 45–50 aircraft.

The first and probably only M-345 prototype, serial number CPX.619 (previously the M-311 prototype) flew for the first time in its final configuration, with the new nose configuration and engine, on December 29, 2016.

The test programme will not be as long and deep as one undertaken for a brand-new design. At present, Leonardo is scheduling the maiden flight of the first pre-series aircraft (a so-called low-rate initial production example) by mid-2018. That aircraft will also have the new cockpit layout, new ejection seats and OBOGS, the final landing gear configuration, and will be built using the new production process. Delivery to the Aeronautica Militare is expected by the end of 2019.