The Save Tangmere Tower campaign received a major boost in mid-June, following approval of the planning application by Chichester District Council for the phase one restoration of the Grade II-listed building. The local MP, Gillian Keegan, spoke up for the campaign in the House of Commons on 26 June, saying, “Our local history is full of incredible stories, although today there is little left of our wartime past. That is why I have been supporting the Save Tangmere Tower campaign, which is working to restore the former RAF control tower and to preserve a part of our military heritage, remembering not only the RAF pilots during the Battle of Britain, but our brave Special Operations Executive agents, often women, flying into occupied Europe.”

The campaign leader Matt Gover-Wren says, “Phase one will see our architect making a full building condition survey, the removal of breezeblocks that cover the entrance, and replacing them with a new door.” 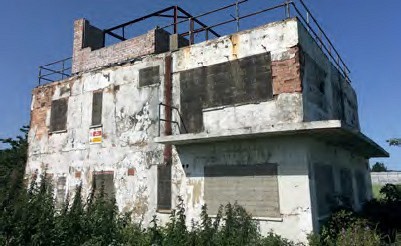 It may have seen better days, but the Tangmere control tower still has great presence, and is the only original, large building left at the legendary RAF fighter base.
TONY HARMSWORTH

The tower was built in early 1944. After many years of neglect, it was listed by Historic England in 2011, and placed on the heritage at risk register during 2015.