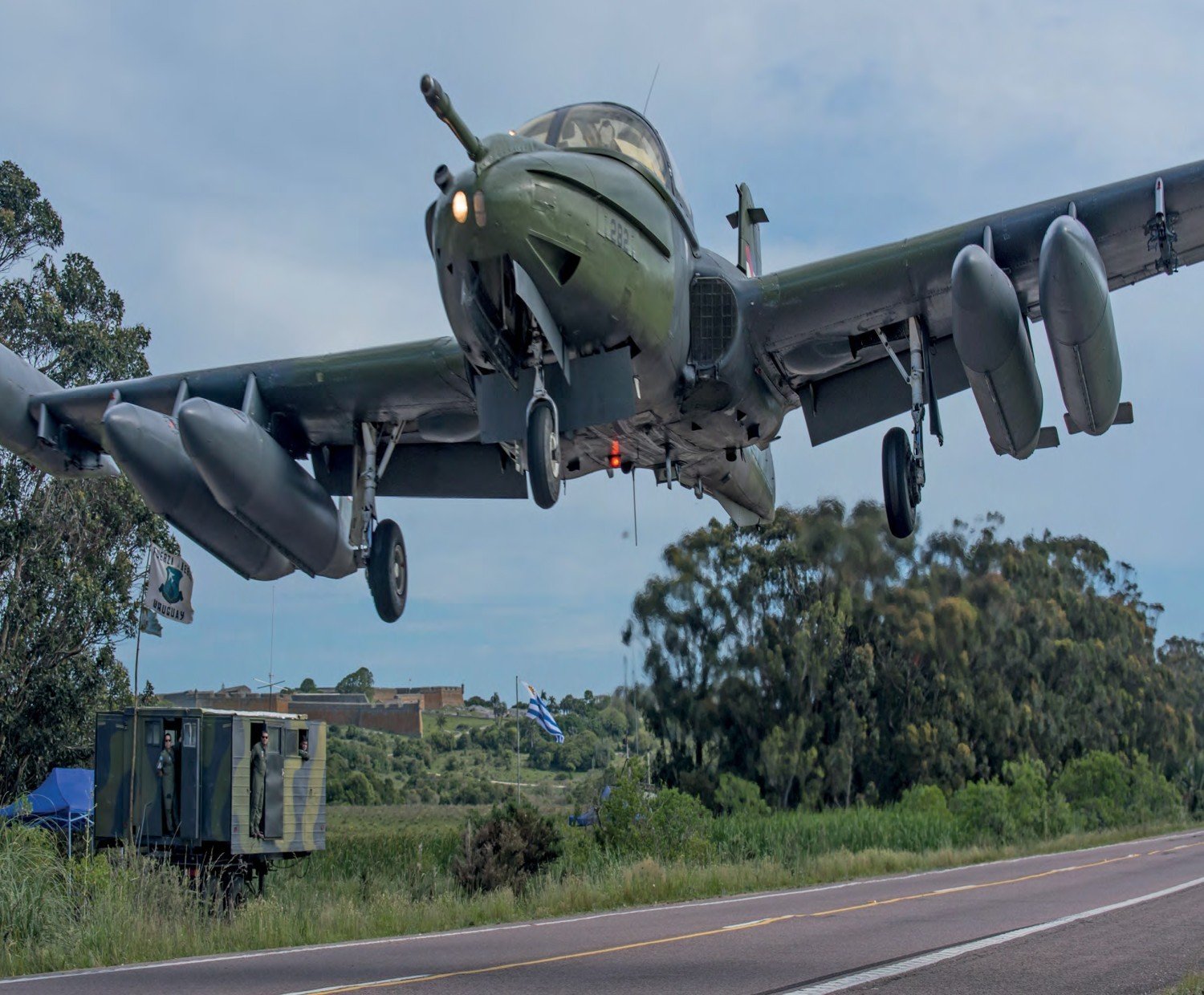 Dragonfly FAU 282 lifts off from Ruta 9. Adjacent to the road, in the background, is the squadron’s communications hut.
All Images by Gerardo Tajes

As a geographically compact nation with small armed forces, Uruguayan military doctrine emphasises having a well-trained, volunteer professional workforce (no military service is available) to maximise utilisation of its limited equipment and material resources. Therefore, if attacked by a more powerful foe, the country’s services defensive plan is to strike back in small packs, attempting to cause maximum attrition to the enemy, while awaiting assistance from a friendly nation. Therefore, as part of the Fuerza Aérea Uruguaya (FAU or Uruguayan Air Force) Annual Activity Plan, deployments to operate its Cessna A-37B Dragonfly attack jets from remote, small countryside aerodromes and highways – far from their main base – are of paramount importance.

Strikers on the highway

The FAU’s A-37Bs are Uruguay’s main strike asset and are assigned to the Escuadrón Aéreo No.2 (Caza) (Air Squadron No.2/ Fighters) based at the 2do. Mario Walter Parallada Air Base, the home station of Brigada Aérea No.2 (Air Brigade No.2) near the town of Durazno in central Uruguay, 190km (120 miles) north of the capital Montevideo.

The latest highway deployment was carried out between November 6 and 10, 2017, on Ruta Nacional (National Road) No.9, running parallel to the Atlantic Ocean in the eastern province of Rocha, just 28km (17 miles) from the Brazilian border.

On the first and last day of the detachment, air transportation of equipment and personnel was provided by a CASA C212 Aviocar from Escuadrón Aéreo No.3 (Transporte) (Air Squadron No.3/Transport) based at Montevideo, home station of Brigada Aérea No.1 (Air Brigade No.1). Liaison duties were carried out by a Cessna C206H from Escuadrilla de Enlace (Liaison Squadron) from Brigada Aérea No.3 based at Boiso Lanza Air Base, the FAU’s headquarters north of Montevideo.

Three missions were flown each day with the assistance of the Policía Nacional de Tránsito (National Transit Police) during ground operations. Police officers closed the highway to passing cars and observers for approximately 15 minutes 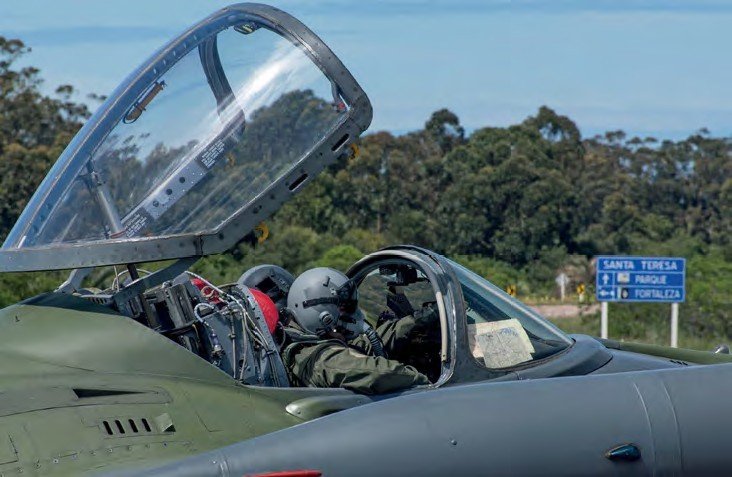 After missions, the A-37Bs parked on a circular hardstand at the east end of the runway. All pilots flew without squadron patches on their flight suits and carried their service issued 9mm pistols. 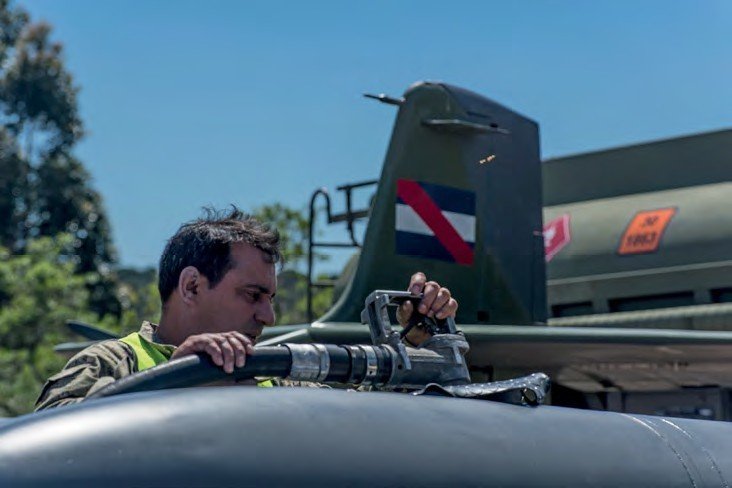 A technician refuels one of the A-37B’s wing tip 75 imperial gallon tanks over the wing.

To ensure safe flight operations, personnel conducted a road sweep by car, inspecting it for debris before every take-off and landing. Air traffic control service was carried out from a hut positioned parallel to the road, with VHF radio equipment supplied by the FAU’s Servicio de Comunicación e Informática (Communication and IT Service). During each mission, the A-37s were under the control of the FAU’s Centro de Operaciones Aéreas (COA or Air Operations Centre) located at Boiso Lanza Air Base. The COA uses data received from two ARSR-3D(M) Lanza radar units built by Indra Sistemas of Spain; a mobile unit is positioned around the country as required, and a fixed unit located at Santa Clara de Olimar, northwest of Rocha. Lanza is a state-of-the-art system, and part of the FAU’s Sistema de Vigilancia y Control del Espacio Aéreo (Air Control and Surveillance System) that communicates and transmits data (including meteorological information) via HF/GPRS and fibre-optics, assisted by the installation of eight communications relay stations, across the country. The FAU’s old and soon to be retired Dragonflies are not equipped with a digital datalink.

Sorties lasted for approximately one hour each, starting with low-level navigation (below 1,000ft) towards nearby designated fixed ground targets. Simulated attacks and close air support missions were conducted with the Ejército Nacional Uruguayo’s (Uruguayan National Army) Batallón de Infantería Mecanizada No.12 (Mechanised Infantry Battalion No.12) based at Rocha. Battalion No.12 deployed to an area west of the port town of La Paloma 97km (60 miles) west of the highway strip at marker 306, where the unit used MOWAG Grizzly generalpurpose armoured vehicles as targets for the A-37s.

For these combined exercises, Escuadrón 2 nominated a forward air controller, a combatqualified A-37 pilot, who in radio contact from the ground – and knowledgeable about the aircraft performance and weapons delivery envelope – provided target information and talk-on to the attacking aircraft.

The Army also provided its own zone controller trained by the Escuadrón de Vuelo Avanzado (EVA or Advanced Flying Squadron) based in Durazno, who is the only officer who can guide the A-37s based on his or her training on the jet’s full performance facts. Interceptions and air combat manoeuvring were undertaken between the two A-37s; previously, the adversary was provided by an IA-58A Pucará twin turboprop.

SAR and combat SAR (CSAR) support for the A-37 deployment was provided by the FAU’s Escuadrón Aéreo No.5 (helicópteros) (Air Squadron No.5/Helicopters) with a Bell 212 Twin Huey and a Bell UH-1H Huey. Downed pilot simulations were also conducted near La Paloma, involving an A-37 pilot, who after bailing out had to walk to a secure location to be picked up by friendly forces from a safe landing zone selected by the pilot.

Escuadrón 5 has conducted overseas UN missions in Ethiopia, Eritrea and presently the Democratic Republic of Congo with ample experience of SAR and CSAR tasking.

The operations were performed with a minimum of two aircraft, the Bell 212 used to collect the pilot and the Huey as a gunship escort, armed with two 7.62mm or.50 guns on either side 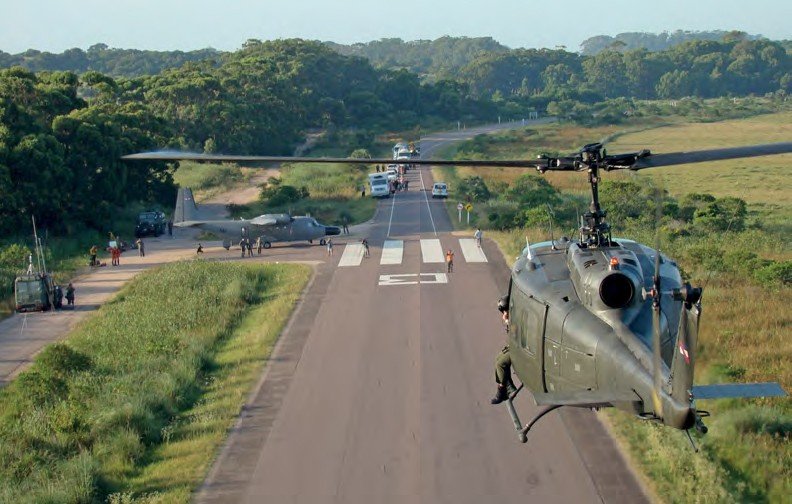 An FAU UH-1H Huey approaches to land with a C212 Aviocar parked on the circular section of the road also used by the Dragonflies to park overnight.

Overhead, the Dragonflies conducted defensive air patrols, in a racetrack pattern; however, the pattern and heading could change if a ground threat towards the jets was detected or to avoid disclosure of the probable helicopters position to an enemy ground observer. Once in contact with the downed pilot, the para-jumpers on board the Twin Huey used isolated personal report (ISOPREP) protocol to verify the pilot. The report, completed by all military personnel before deployment to potential hostile areas, contains full personal details and four self-generated secret questions, which have to be answered correctly whilst being rescued. CSAR crew carry the downed pilot’s ISOPREP details to ensure they collect a friend and not a foe. Failure to reply correctly requires the pilot to be handcuffed and taken back to base for interrogation.

In all, 30 hours were flown by the A-37s. Major Bruno told AIR International he was satisfied with the safe and successful completion of the deployment.

Pilots new to the Dragonfly flew initial missions with instructors to familiarise themselves with the highway, narrower than a standard runway, and local conditions like strong turbulence generated by the prevailing Atlantic sea breeze striking a forest south of the road. On later missions, the new pilots operated as aircraft commander with minimum supervision.

Escuadrón 2 maintenance engineers (Aerotécnicos) perform wonders to keep the Dragonfly fleet flying 41 years after the arrival of the first batch of eight aircraft in 1976. Of great concern is the soon to be depleted stock of Weber ejection seat cartridges. There is no supply chain; seat production has long stopped, and the current stock of cartridges is estimated to run out in 2018.

The political establishment in Uruguay has shown no indication or interest in procuring replacement aircraft to modernise the FAU fleet. In view of this attitude, recent meetings have taken place between FAU personnel and Martin-Baker Argentina to assess the possibility of retrofitting the fleet with a new ejection seat. The British firm is offering a replacement seat based on the one utilised on the Embraer Tucano fleet. The company claims considerable weight savings and conversion costs, easier maintenance and improved performance when compared to the old seat. Of note is the possibility of through-the-canopy ejection at zero altitude, within a speed range of 70 to 430kts, a far safer ejection envelope than the Dragonfly possesses now, requiring speed and height before bailing out. 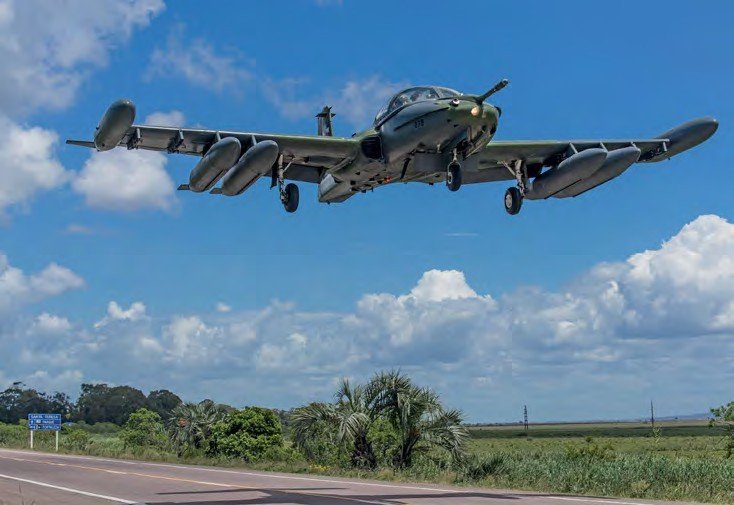 A-37B FAU 279 seen on short finals to runway 03 on Ruta 9. Pilots new to highway operations, were made aware of the possibility of turbulence created because of the close proximity of a nearby forest.

Pilots from Escuadrón 2 and 1 (the latter is now stood down since the Pucará fleet was withdrawn from service and its pilots keep current by flying PC-7Us) visited Nanchang in China in August 2016, to assess and fly the Hongdu L-15B lead-in fighter trainer jet. The aircraft has a passive electronically scanned array radar, IFF, ECM and radar warning receivers. Uruguay’s main air threat comes from illicit flights crossing the country to and from its neighbours Brazil and Argentina, so Escuadrón 2’s main role is aerial policing.

Without the Pucará amongst its ranks – a type often tasked with intercepting lowperformance illicit aircraft – and with a handful of Swiss-built armed Pilatus PC-7U turbo trainers in service, the ancient Dragonfly fleet is stretched to its limits for such tasking. FAU high command has insisted that if new aircraft are purchased for its fighter/attack squadrons they must have a radar, seen by pilots as a substantial tool during the final moments on air interception whilst approaching a target, following the initial guidance and vectors to the target provided by the Lanza 3D radars of the AOC.

The FAU requires eight to 12 jets to replace the Dragonfly, and possibly the Pucará, unifying Escuadrón 2 and 1 into a single fighter attack unit. Acquisition of a high-tech aircraft will represent a major technological step forward and be a perfect partner to the Lanza 3D radars that are to be upgraded during 2018, finally bringing the FAU into the 21st Century. 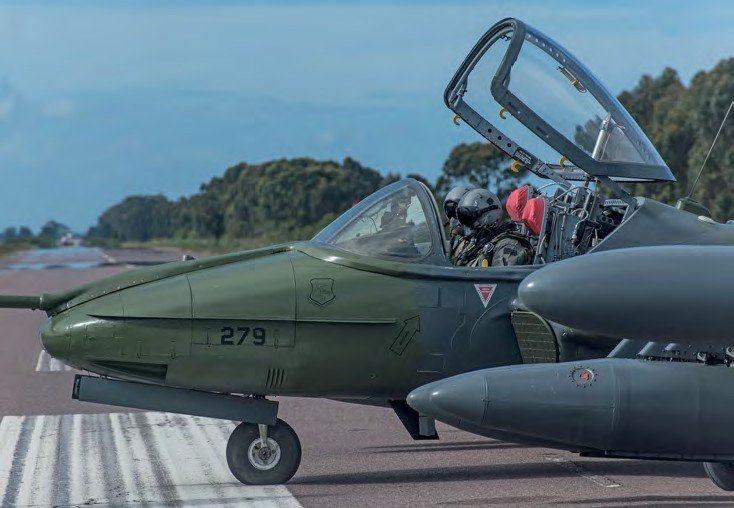 A-37B FAU 279 ready to go with green air inlet screens for the GE J-85-17A turbojet engines fitted to prevent the possibility of debris ingestion on the unprepared runway.