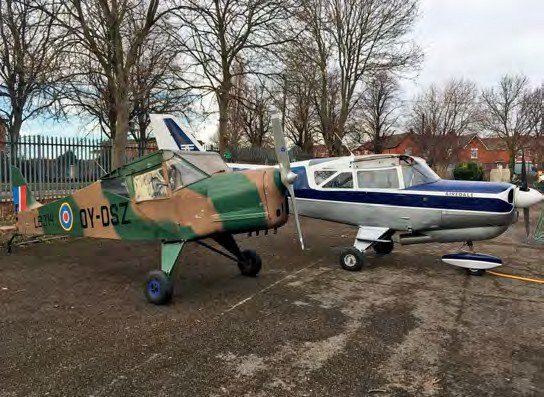 Auster I LB314/OY-DSZ accompanied by Beagle A109 Airedale G-ARYZ at the South Yorkshire Aircraft Museum in Doncaster during late February. SYAM

On 12 February, Auster I LB314 arrived on a trailer at the South Yorkshire Air Museum in Doncaster after a road trip from its former home at Stauning Airport in Denmark. Nearly 76 years earlier, LB314 had been delivered to No 654 Squadron at RAF Firbeck, just 10 miles south of the museum.

Museum volunteers set out from Yorkshire to collect their latest prize on 8 February. After a journey of 1,200 miles, and some appalling weather en route, they stopped on the remaining concrete area at RAF Firbeck, where the museum was located for 20 years until moving to Lakeside at Doncaster in 1999. The spot now has a memorial to those who served at the base. LB314 was operated from Firbeck between September and November 1942, when No 654 Squadron left for pastures new. From there it moved between various units the UK, and in June 1944 was operated by the No 83 Group Communications Squadron in support of the Allied landings in Normandy. The machine was disposed of by the RAF in 1946, joining the Lancashire Aero Club, and 10 years later went to Germany, before heading north to Denmark in 1972 where it was registered OY-DSZ.

In addition to LB314, the museum has the fuselage of another Auster-designed machine, Beagle A109 Airedale G-ARYZ, which flew from the museum’s current site when it was Doncaster Airport. The Airedale four-seater prototype first flew in April 1961, but was originally designated as the Auster D8, and was based on the Auster C6 Atlantic, G-APHT, which made its maiden flight in 1958. The first D8 was under construction at Rearsby when Beagle Aircraft acquired the Auster company during 1960. Doncaster is the only place where it is possible to view the earliest military variant of the Auster alongside the final civilian development of an Auster design. The fuselage of LB314 can now be seen in the main hangar at the Doncaster being prepared for display, and will be fully assembled and exhibited publicly at the museum’s open-cockpit weekend on 12-13 May.

Museum volunteers made a journey of 1,200 miles, with some appalling weather en route, to collect the Auster