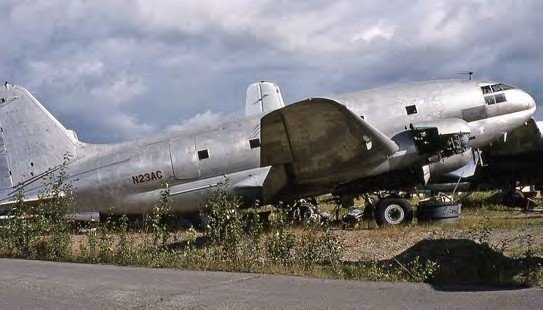 C-46 Commando N23ACat Fairbanks, Alaska. It is due to arrive in Israel by the end of January.
PETERMARSON

A Curtiss C-46 Commando that was used during August- September 1947 to fly Iraqi Jews to safety in Israel has been saved from the scrap man in Alaska, and is now destined to go on display at the Atlit Detention Camp Museum, 12 miles south of Haifa, Israel.

The clandestine rescue mission, named Operation ‘Michaelberg’, was mounted due to the increasing persecution of Jewish residents in Iraq by their Arab neighbours. The British authorities had denied the Jewish community’s petition to allow Iraqi Jews to enter Israel legally, so a plan to smuggle them into the country was devised. The operation was planned by the Aliyah Bet group, part of Haganah, a Jewish paramilitary organization that operated in Israel in defiance of the British Mandate.

Former Israeli Knesset speaker Shlomo Hillel — who had been involved in ‘Michaelberg’ — learned of the continued existence of the historic C-46, 44-78628/ N23AC, which was derelict at Fairbanks, Alaska. In mid- November, the aircraft, latterly registered N23AC, was crated for delivery to Israel by sea. It is expected to arrive at Atlit by the end of January.

The Atlit detainee camp was established by the authorities of the British Mandate for Palestine at the end of the 1930s in an effort to prevent Jewish refugees from entering Mandatory Palestine. It was declared a National Heritage Site in 1987. The museum is dedicated to the history of pre-Israeli state immigration efforts.