Phantom FG1 XT597, the first pre-production example of the Rolls- Royce Spey-engined McDonnell Douglas F-4K version, has been acquired from Everett Aero in a private sale by Mark Abbott. The jet, still in its ‘raspberry ripple’ scheme as worn during many years on the strength of the Aircraft and Armament Experimental Establishment at Boscombe Down, will be restored by the British Phantom Aviation Group, of which the new owner is a management team member. XT597 will soon be moved from the Everett facility at Bentwaters, Suffolk, to the BPAG’s new premises at an as yet undisclosed location in the East Midlands.

First flown from the McDonnell factory airfield in St Louis, Missouri on 1 November 1966, XT597’s entire career was as a test aircraft, initially as part of Spey Phantom development work in the USA before it came to Britain. It served with the A&AEE until 28 January 1994, being the last F-4 to fly in the British military. Following retirement, XT597 became one of the exhibits in the nascent Boscombe Down Aviation Museum, but it remained in Ministry of Defence ownership. In 2012 the collection had to leave its site at the Wiltshire test airfield due to the MoD’s insistence that a commercial rate be charged for use of the museum premises, at which time it moved to Old Sarum.

The Phantom stayed behind, instead being sold to Everett and transported to Bentwaters.

“We are extremely grateful that Mark has committed himself to saving XT597”, said BPAG chairman Paul Wright. “597 represents an important and unique chapter in the Phantom story. We are looking forward to working with Mark to restore it to its former glory, and preserving it for future generations.”

Also due to move to the group’s new facility is F-4J(UK) Phantom ZE360, acquired by the BPAG in a joint venture with the No 74 Squadron Association. This is one of just two survivors out of 15 ex-US Navy F-4Js acquired for RAF use in the wake of the Falklands War, re-forming No 74 Squadron as a means of bolstering the UK’s air defences. The other, ZE359, was restored by IWM Duxford to its USN colours as BuNo 155529, making ZE360 unique in still representing the variant’s RAF service. 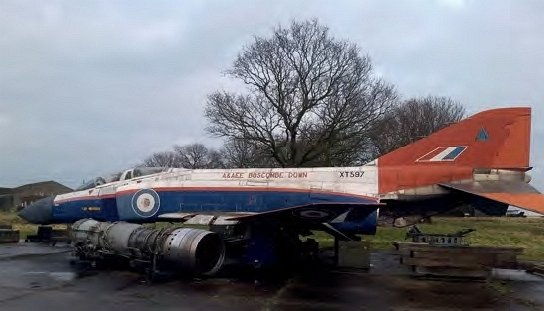 ‘Raspberry ripple’ Phantom FG1 XT597 in the Everett Aero facility at Bentwaters. It has now been acquired by Mark Abbott and will be restored. Meanwhile, after years with an MoD fire training facility at Manston (inset), the restoration of ex-No 74 Squadron F-4J(UK) ZE360 will be a long job. PAUL WRIGHT

XT597 represents an important and unique chapter in the Phantom story. We are looking forward to restoring it to its former glory

Having spent many years with the Defence Fire Training and Development Centre at Manston, Kent, the airframe is in need of significant work. “Time and weather have taken their toll on the aircraft”, says Wright, “and the group is under no illusions that this is anything other than a major restoration project. Fundraising has already begun and will continue throughout the restoration and preservation process. We have a planned visit in September to carry out some protective work, and to assess the best method of removing the aircraft from site.”

In time, the BPAG says it will arrange pre-booked visits to view the progress of work on both aircraft. Should you wish to offer help to either project, e-mail BPAGvolunteers@gmail.com, or to support ZE360’s restoration contact phantomerchandise@outlook.com.