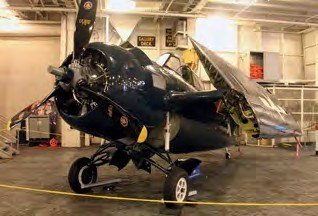 Wildcat BuNo 55052, now on display in the USS Hornet following a six-year restoration. VIA MICHAEL McCARRON

Following a six-year, in-house restoration, Grumman FM-2 Wildcat BuNo 55052 went on display on the hangar deck of the USS Hornet at Alameda, California in mid-August. The fighter, built by the Eastern Aircraft Division of General Motors, was recovered from Lake Michigan in October 1994. It was ditched into the lake on 14 June 1945 by a trainee pilot following a loss of power during a ‘wave-off’ from the USS Wolverine.