The RAF’s military display teams may have seen the airshow season largely cancelled, but their work in helping the response to the pandemic, as well as with morale-boosting flypasts, shows their worth. Chris Croot spoke to them. For many aviation fans, the summer typically means one thing: airshows! The UK calendar typically features in excess of 80 events between May and September, but sadly the global COVID-19 pandemic has put an end to most of these. For private display acts the loss of revenue will add increased strain on their budgets, but how has the crisis affected military display teams? We spoke to the Royal Air Force’s Chinook Display Team and the Red Arrows to find out more.

The Chinook Display Team based at RAF Odiham in Hampshire is responsible for showcasing the UK’s premier heavy-lift battlefield support helicopter. The team’s breathtaking display sequence mixes the surprising agility of the 18-tonne aircraft with real-life tactical manoeuvres. Last year the team flew at 16 events across the UK, but now their schedule for 2020 is somewhat smaller. 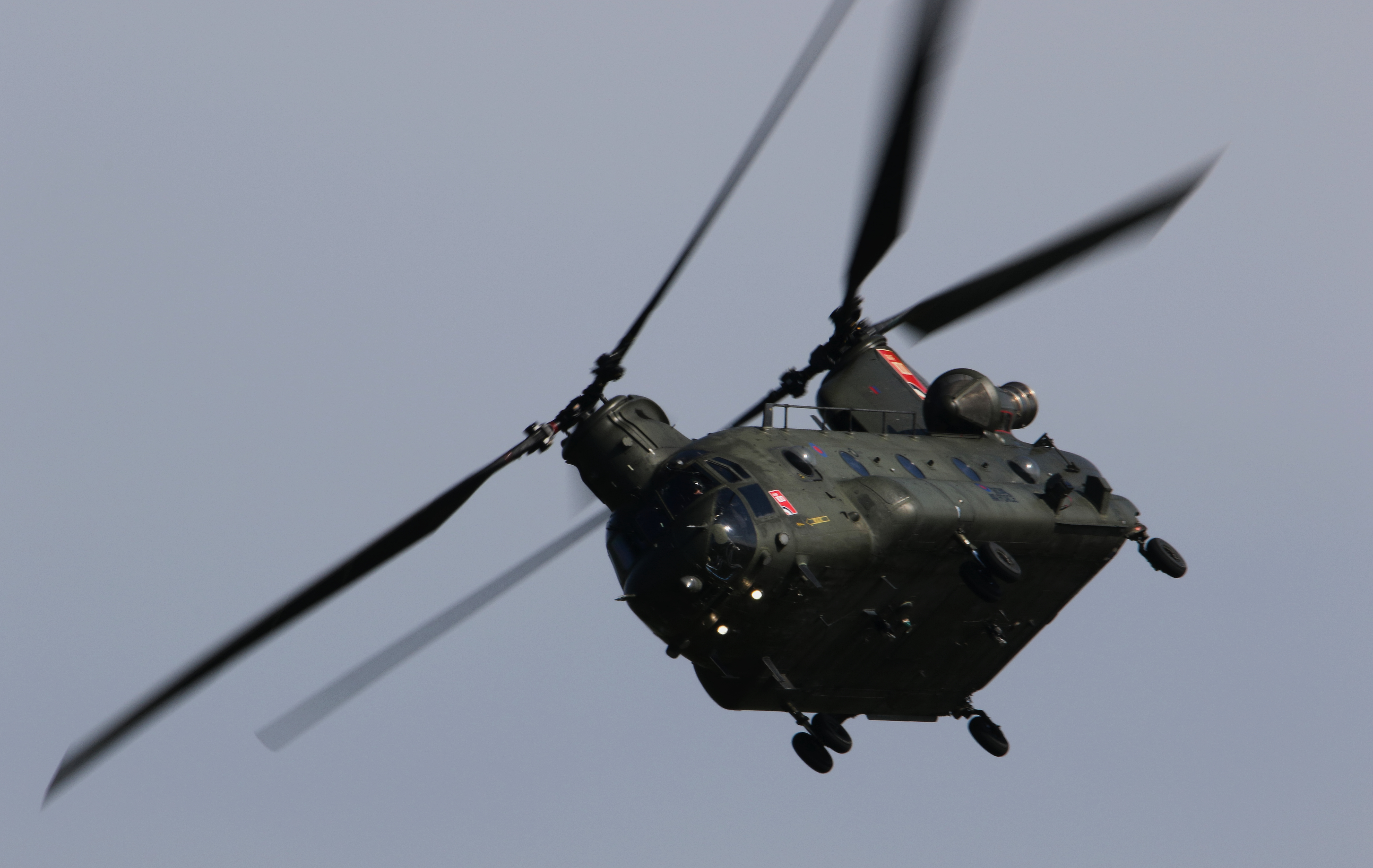 The new team is selected during the September-January off-season and Public Display Authority (PDA) is usually achieved at the start of summer: “We aim for PDA around May time, but unfortunately due to COVID-19 we haven’t even been able to do the captain’s handover, which in a normal year happens in February or March,” explained Sergeant Gav ‘Ando’ Anderson, Weapons Systems Operator and also the team manager.

Things work slightly differently for the Red Arrows who, typically, only replace two or three team members per season, with each pilot flying for around three years; this ensures that experience is retained within the team. The Red Arrows usually split winter training between their home base of RAF Scampton in Lincolnshire and deployment overseas – traditionally to RAF Akrotiri in Cyprus or a Hellenic Air Force base in Greece – known as Exercise Springhawk. It is during Springhawk that the team’s new display routine is perfected and polished in fair weather conditions, which affords a high tempo of sorties per week, and is also traditionally where PDA is granted. However, due to the pandemic, the exercise didn’t happen and the team was, instead, forced to conduct their training in the UK. Training was temporarily halted for the Red Arrows following the UK’s initial lockdown and this, combined with mixed weather conditions and a phased return to formation sorties, further delayed PDA. Despite losing valuable time, the dedicated personnel at RAF Scampton worked hard to allow some of it to be recovered. Wing Commander David Montenegro, Officer Commanding, Royal Air Force Aerobatic Team, said: “The support of RAF Scampton’s workforce has been immense – from firefighters and medics to air traffic controllers and support staff, to name just a few.”

Flying is a perishable skill and display flying is no exception. The 2020 Display Captain Flight Lieutenant Matthew ‘Schmitty’ Smyth said: “It has been frustrating not being able to work on the routine as display flying is all about repetition, repetition. Practise is key.” Although the team wasn’t able to undertake any display practice, the crew have still been busy. One of the key differences between the Chinook Display Team and the Red Arrows is that the former remains an operational unit – although the fast-jet team usually has a packed schedule of more than 70 shows each season and is busy year-round. The UK Chinook force was heavily involved in Operation Rescript, which saw assets mobilised to help support the NHS, including a detachment to RAF Lossiemouth to provide additional aero-med capacity to the Scottish Islands. Engineers worked around the clock to provide two Chinooks 24/7 to conduct aeromedical evacuations of COVID-19 patients and a third for routine tasking such as the movement of PPE and NHS staff. Working alongside the civilian services isn’t a new experience for the RAF. “We practise with civil agencies around the UK quite regularly and enjoy a good working relationship with them,” said Ando. “Last year we were asked to assist with the dam at Whaley Bridge for example, so it happens fairly regularly”. Schmitty explained how well the NHS staff adapted to working with the Chinook: “You have to remember the air isn’t foreign to the NHS. They have a large network of air ambulances so there were plenty of opportunities to discuss the best way to do things. The crewmen were able to work with paramedics to work out what they needed and what we could provide.” Should a patient be transferred by Chinook, as indeed they were, the crew would have to undertake thorough de-contamination, as Ando explained: “It was a very strict CBRN (chemical, biological, radiological and nuclear) style process. We would have to remove our flying kit and clothing in stages as we passed through so it could be treated. The risk of exposure was pretty low though, as patients were transported in sealed units that were secured to the floor of the aircraft.” Both agreed that the contribution made by the whole of Joint Helicopter Command to the fight against COVID-19 is something to be proud of. “It really has been incredibly rewarding work, I think humbling is the best way to describe it,” Schmitty said. Understandably, the Red Arrows’ aircraft were not going to participate directly in the fight against COVID-19, but the team was still able to perform publicly at some key events during the summer. A flypast over the capital was performed in May to commemorate VE Day. Just weeks later, the Red Arrows were involved in a joint event with the Patrouille de France (the French Air Force aerobatic display team) that saw both teams fly together over Paris and London in the same day. The team celebrated Armed Forces’ Day with a short tour of North Yorkshire, which culminated in a flypast over 2020’s host city, Scarborough. Teams Leader and Red 1, Squadron Leader Martin Pert, said: “Commemorating our forebears is of equal importance in 2020, especially, in this, the 80th anniversary year of the Battle of Britain and the 75th anniversary of VE Day and VJ Day, of which we have already carried out evocative flypasts over the nation’s capital, even amidst recent complexities.” For both teams, public engagement is vital; the Red Arrows are seen by millions every year and meet thousands of fans at airshows and events, supporting a range of UK interests. In order to remain engaging, social media usage has seen a marked step up, including a ‘Virtual Air Tattoo’ held live on YouTube and Facebook. Restrictions on social distancing may mean the Red Arrows will get to fly some public displays before the end of the season. “Regardless of the reduced number of shows, all of us here at the Red Arrows look forward to streaming red, white and blue up and down the country at some point in 2020,” said Sqn Ldr Pert. 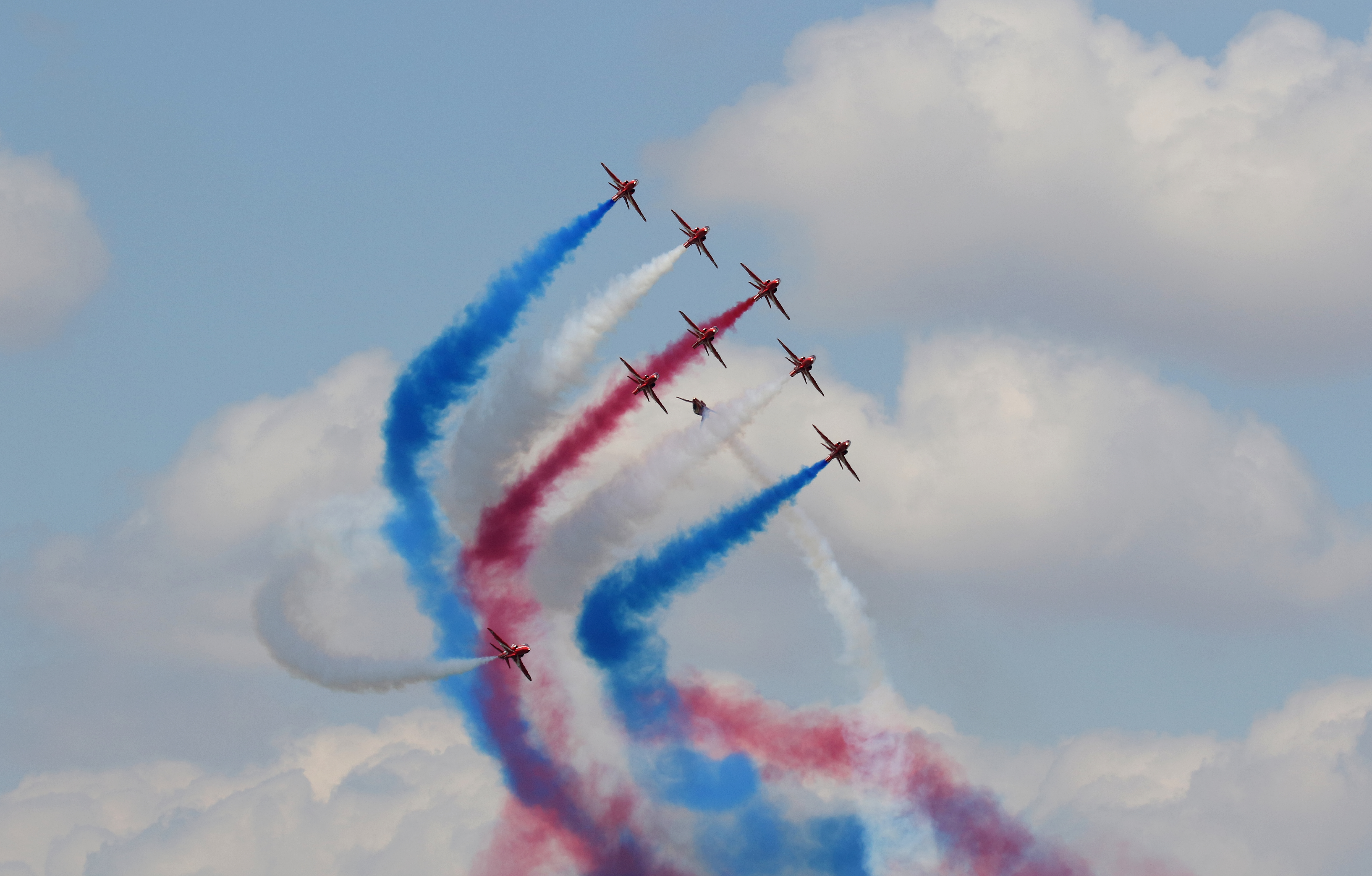 When COVID-19 first emerged, very few if any of us could have predicted the significant impact it would have on our lives. Cancelling an entire airshow season was practically unheard of, yet it is now a harsh reality affecting enthusiast and aircrew alike. The RAF’s display teams have risen to the challenge superbly, be it utilising capacity to support operations or performing morale-boosting flypasts. Both will return stronger next year and when they do, their dedicated fans will be waiting.