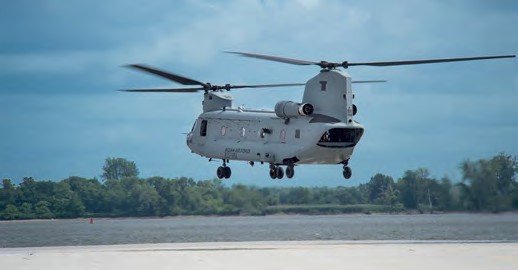 The Indian Air Force is acquiring 15 CH-47F(I) Chinook helicopters, which have been tailored to meet local requirements.
Boeing

The first four of 15 Boeing CH-47F(I) Chinook heavylift helicopters were handed over to the Indian Air Force at Chandigarh Air Force Station on March 25, 2019.

The handover ceremony was attended by dignitaries, including Chief of Air Staff Air Marshal BS Dhanoa.

India signed a contract for the Chinooks in September 2015 and the first example, wearing the Boeing test registration N279RN, made its maiden flight in the United States in July 2018.

The final batch will be delivered to the Indian Air Force in March 2020 and the helicopters will be used in the northern and eastern regions of the country.