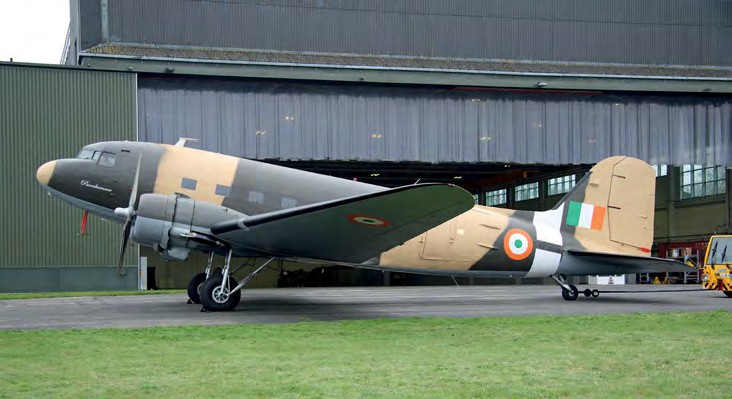 DC-3 ‘VP509’/N347DK wearing the name Parashurama on its nose at RAF Benson on 12 April.
ADRIAN BALCH

On 12 April, Douglas DC-3 N347DK was formally handed over to the Indian Air Force Vintage Flight at RAF Benson and accepted by the deputy high commissioner, Dinesh K. Patnaik, from the Indian Embassy in London.

The machine was then flown up to Coventry Airport where final preparations were made prior to a departure for India, piloted by ‘Woody’ Woodeson and Ben Cox of Reflight Airwork, together with two Indian Air Force (IAF) test pilots. The aircraft was due to route via France, Italy, Greece, Jordan, Saudi Arabia, Bahrain, Oman and the Indian city of Jamnagar, to arrive in Delhi 10 days after leaving the UK.

The IAF Vintage Flight is in the early stages of assembling a fleet of 10 historic aircraft to serve as a tribute to India’s military aviation heritage, much as the Battle of Britain Memorial Flight does in the UK. Its commanding officer Wg Cdr Rahul Deshpande said, “The first of this series of aircraft is the Tiger Moth”. Other types included in the restoration programme are the world’s only surviving Westland Wapiti, a Hawker Hurricane, Supermarine Spitfire and Hindustan HT-2. Deshpande added, “The restoration process will be completed in a phased manner”. IAF officials are looking at the Vintage Flight as an inspirational initiative to attract more young people to join the air arm.

Bangalore politician Rajeev Chandrasekhar acquired the Dakota in 2010, and has gifted it to the IAF. He is the son of Air Cdre M. K. Chandrasekhar, a decorated IAF transport pilot who established the National Military Memorial in Bengaluru.

Prior to departing for India, the aircraft had its serial changed from KN397 to ‘VP509’ and was named Parashurama to represent the first IAF Dakota that transported troops from the army’s 1 Sikh Regiment to Srinagar on 27 October 1947 as part of the Jammu and Kashmir operations, just weeks after India’s independence.