Euphoria and relief are common emotions experienced whenever a prototype takes to the air for the first time. Crucial though that event might be, by far the biggest hurdle is getting the new design into production. Just 90 days after ‘Mutt’ Summers carried out the maiden flight of Supermarine Type 300 K5054 on June 3, 1936 the Air Ministry placed an order for 310 fully militarised versions ready for frontline service. 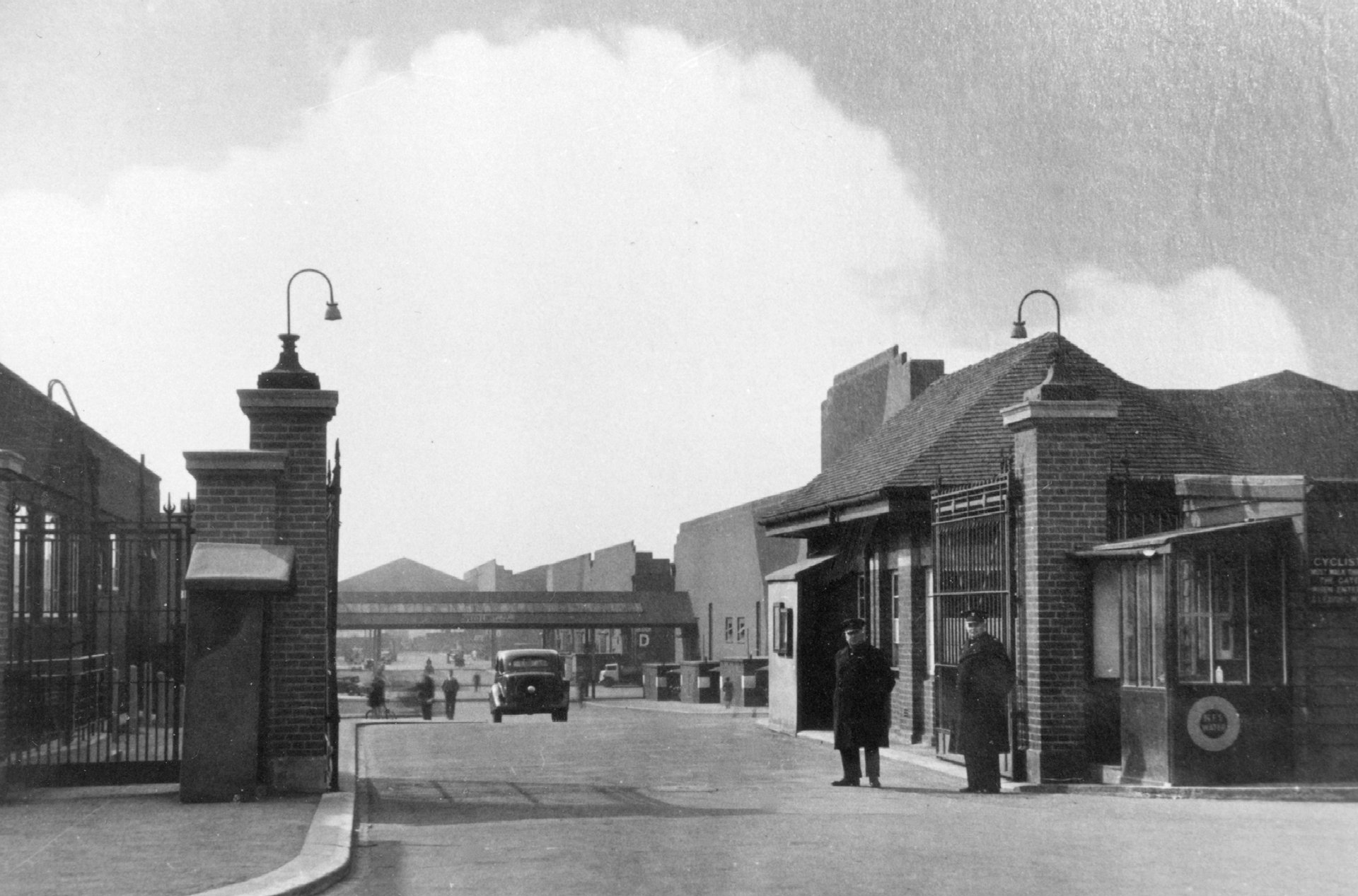 Running through the main site was ‘Central Avenue’, which was bridged at several points by walkways from one hall to another.

Champagne corks may have been popping but, despite being part of the giant conglomerate Vickers-Armstrongs, Supermarine was a small concern that was finding building Walrus amphibians challenging. Mass manufacturing a state-of-the-art fighter was a daunting prospect.

Problems emerged at an alarming rate. A string of sub-contractors was engaged to help with the massive capacity expansion required. Co-ordinating ten different companies, all reliant on one another to keep the flow going, was a never-ending ordeal. (This was not a new problem and it still rears its head, as Airbus and Boeing can testify).

That beautiful elliptical wing was a nightmare to build and a specification change to the leading edge did not help the timetable. Production of fuselages was out-pacing the wings and Supermarine was taking a lot of the flak from the Air Ministry. Alternatives needed to be considered: perhaps the Itchen and Woolston factories in Southampton were better suited to other, less complex, types? 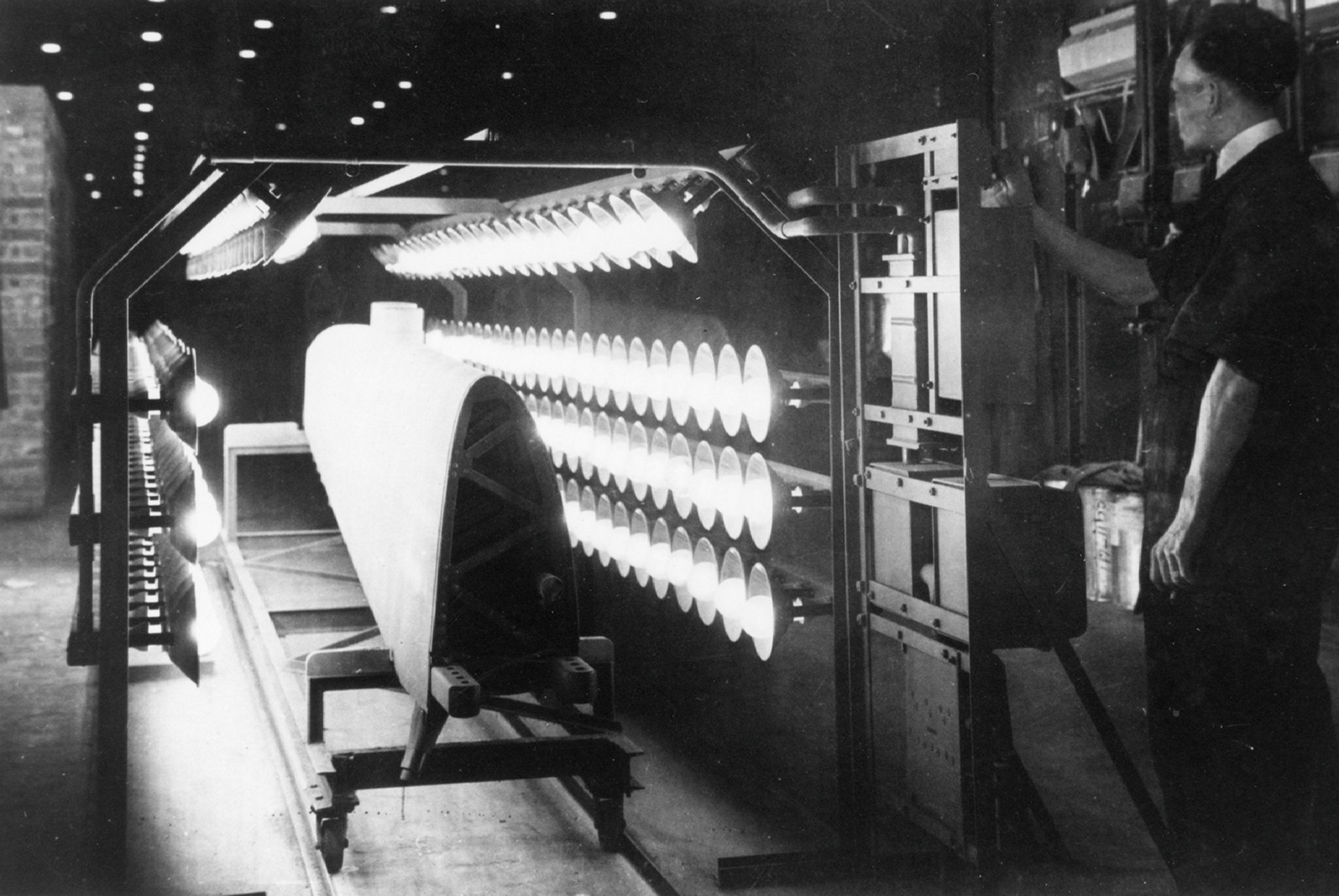 Drying a Spitfire wing leading edge after painting with a barrage of infrared lights.

The prospect that Supermarine could switch to building the ‘rival’ Hurricane was real, but other options took priority. The Air Ministry pondered letting Supermarine take over Lysander production from Yeovil-based Westland and perhaps the same company’s twin-engined Whirlwind fighter. Another twin considered was the Bristol Beaufighter. Westland had started making wing ribs for Supermarine in 1936 and from 1939 took on manufacturing entire Spitfires. 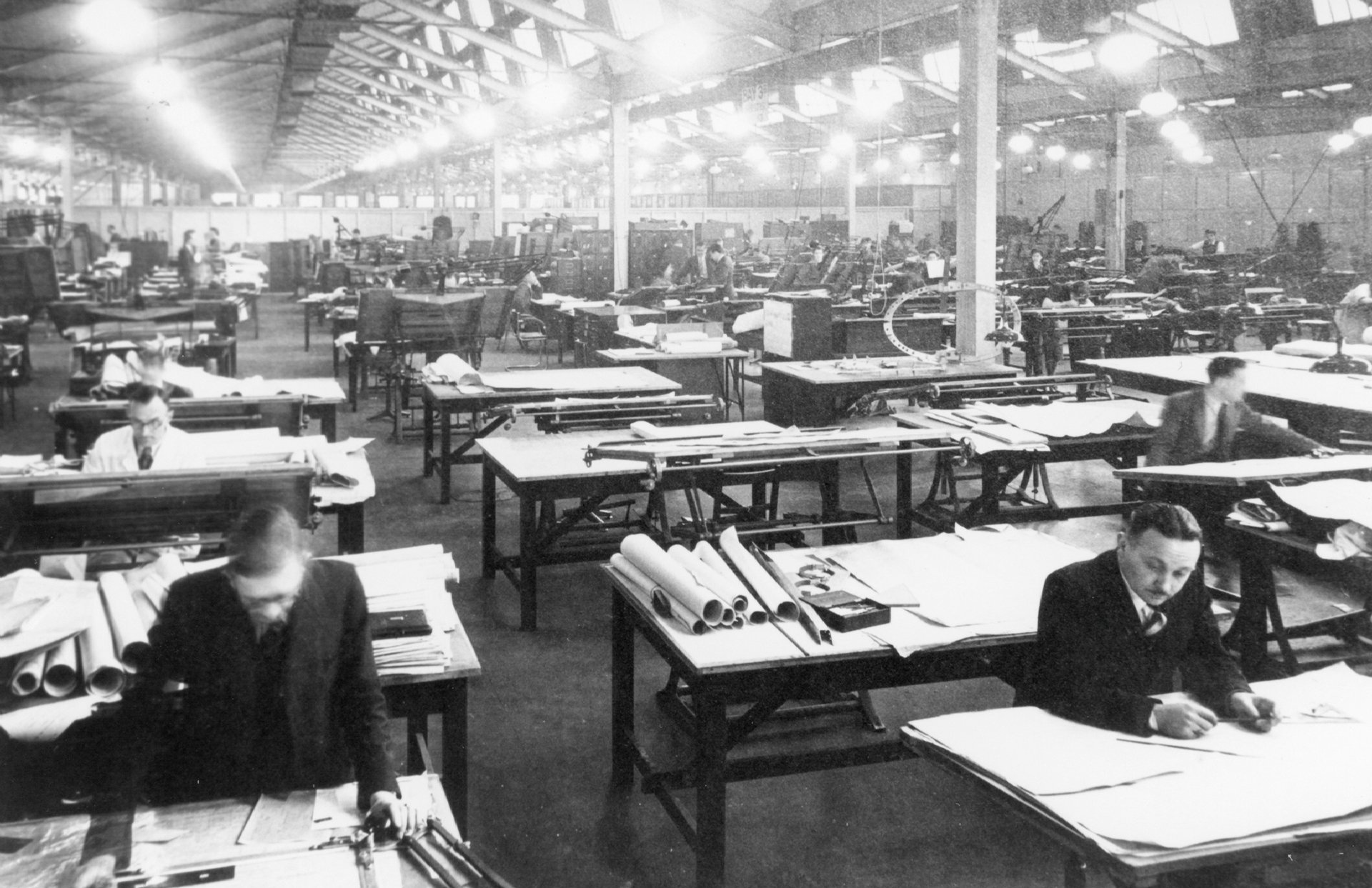 As Supermarine fought to overcome a very steep learning curve, the Air Ministry realised that removing tooling from the Southampton plants would hinder output of Spitfires and a more radical solution was needed. A second contract for 200 Spitfire Is was placed with Woolston in March 1938.

Talks began in May with a giant of the manufacturing process, motor vehicle mogul William Morris – Lord Nuffield. The idea of ‘Shadow Factories’ – well-proven industries building aircraft to supplement the original constructor – had been well established in World War One. The mass production skills of the Nuffield Organisation could transform Spitfire output. Morris talked of an initial batch of 1,000. 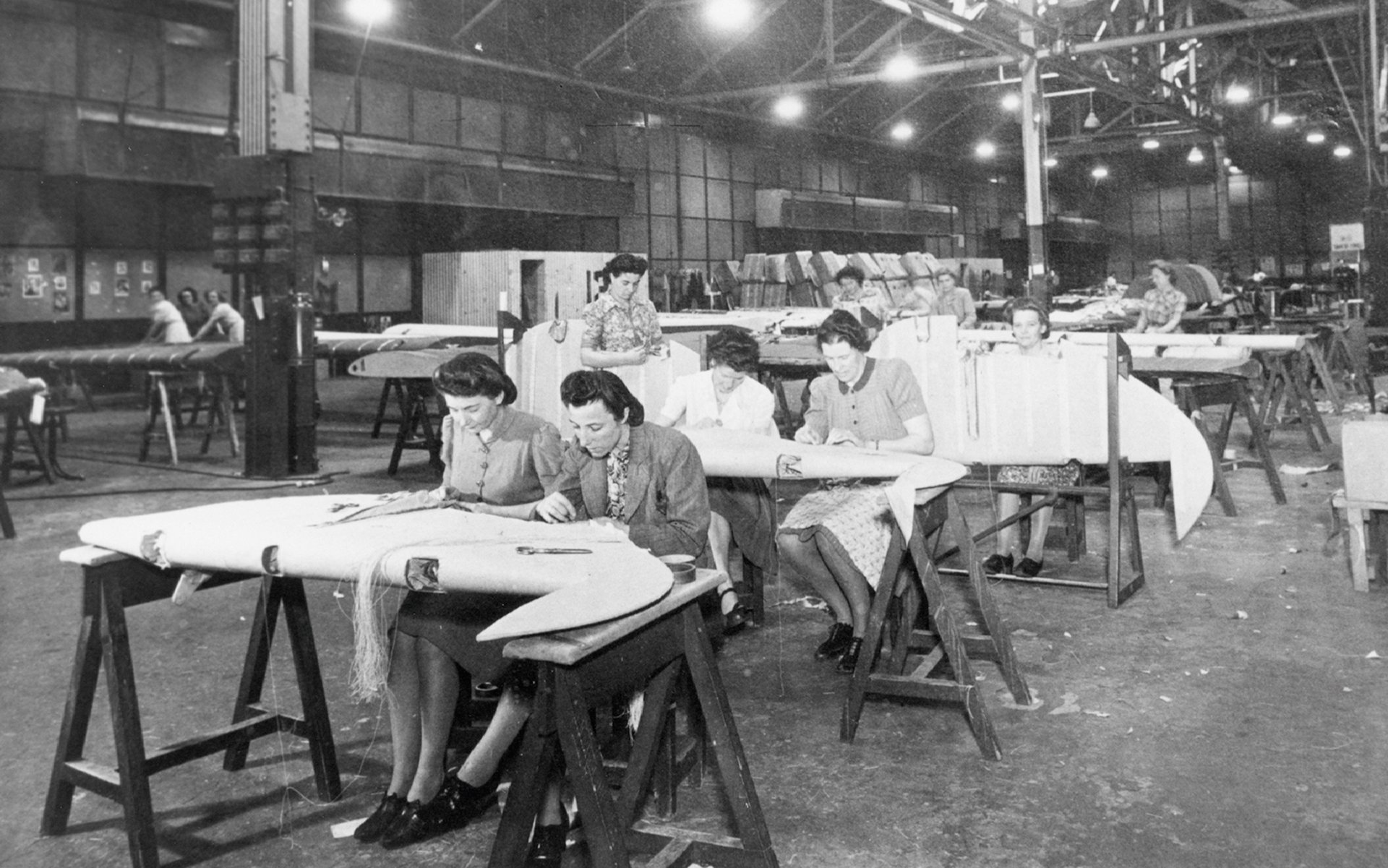 Part of the dope room; sewing fabric on Spitfire rudders.

Also in May 1938, the first production Spitfire, Mk.I K9787, first took to the skies at Eastleigh, 27 months after the prototype. In August, 19 Squadron at Duxford became operational and reached full strength – 16 aircraft – when K9811 was delivered on November 11. By that time just over 200 Hurricanes were in squadron service. 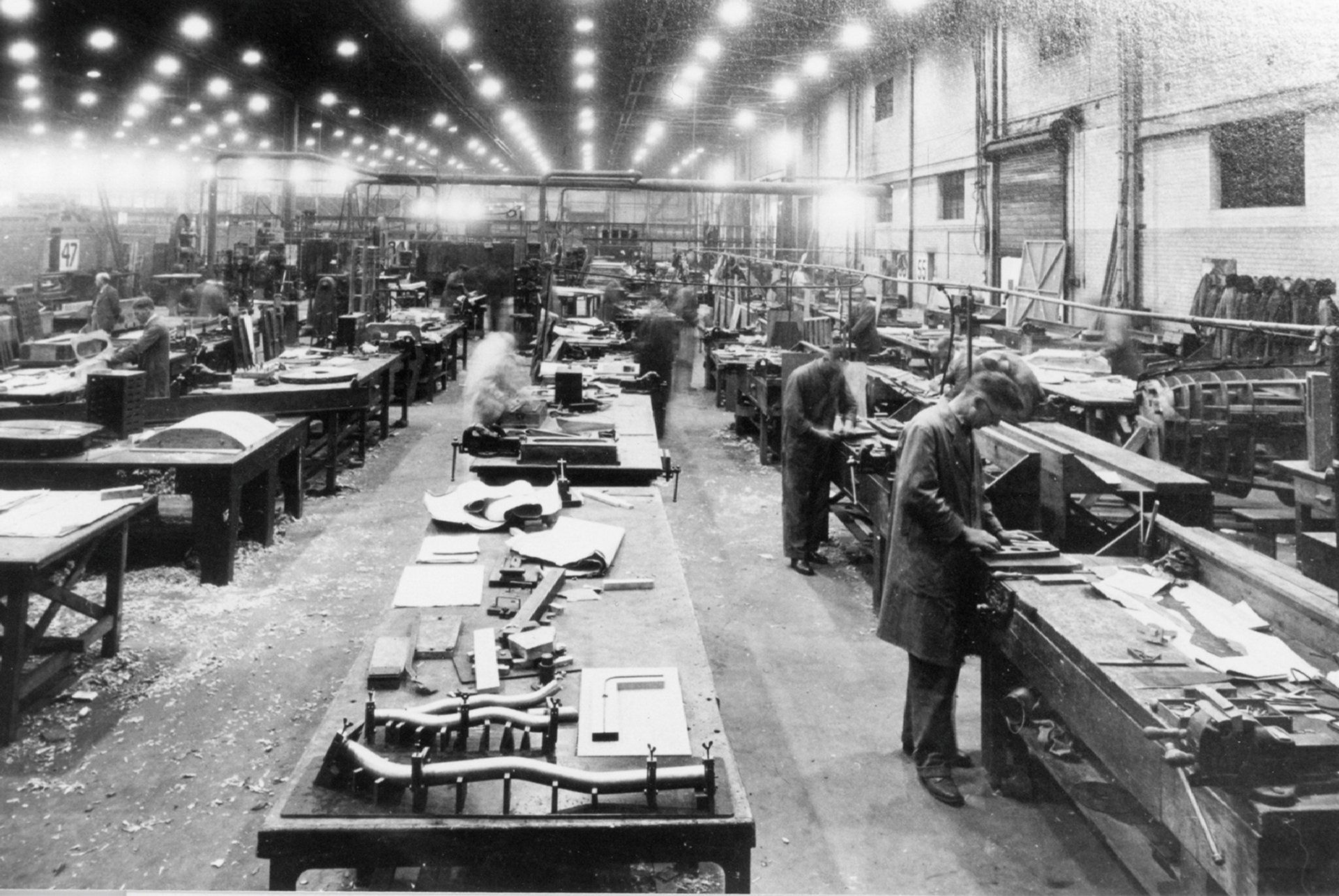 The pattern makers’ shop; working on items for Lancasters as well as Spitfires.

Nuffield began planning a huge factory with the capability to churn out a maximum of 60 Spitfires a week. Meanwhile there was much debate regarding where it could be built. Liverpool, far away from enemy bombers and with a ready workforce, was prominent. Nuffield held out for the area he knew well, the Midlands. 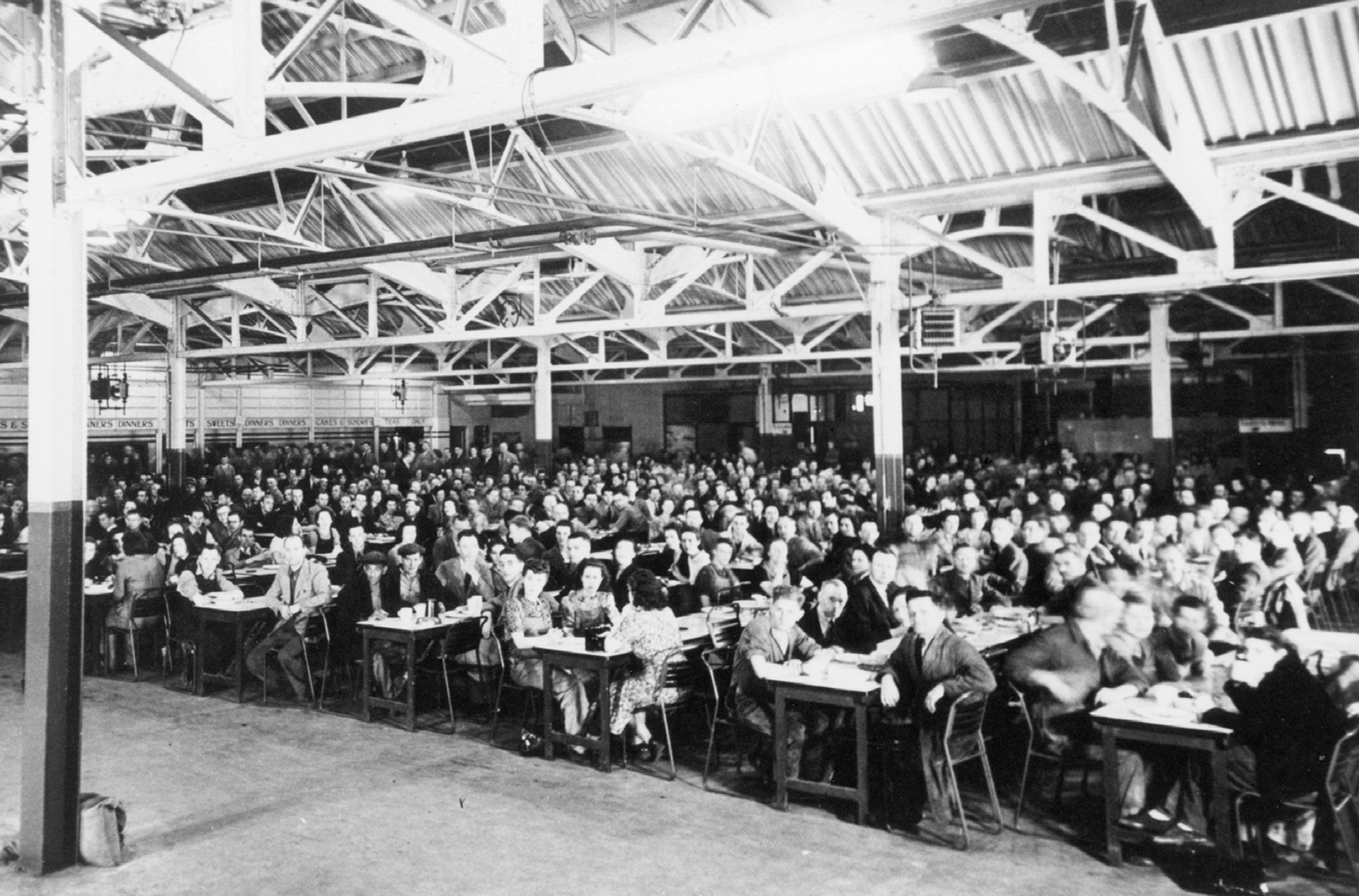 The main works canteen. All via author

Land held by Birmingham Corporation and tyre manufacturer Dunlop adjacent to Castle Bromwich airfield, to the east of Birmingham was ideal and all 1,414 acres was acquired at £1,000 per acre. A huge building, used for the assembly of Handley O/400 bombers in 1918 and the venue for the February 1937 British Industries Fair, was close by and was taken over. Construction of the vast factory – the Castle Bromwich Aircraft Factory (CBAF) began on July 12, 1938. Including all machinery, the entire plant cost £4 million. 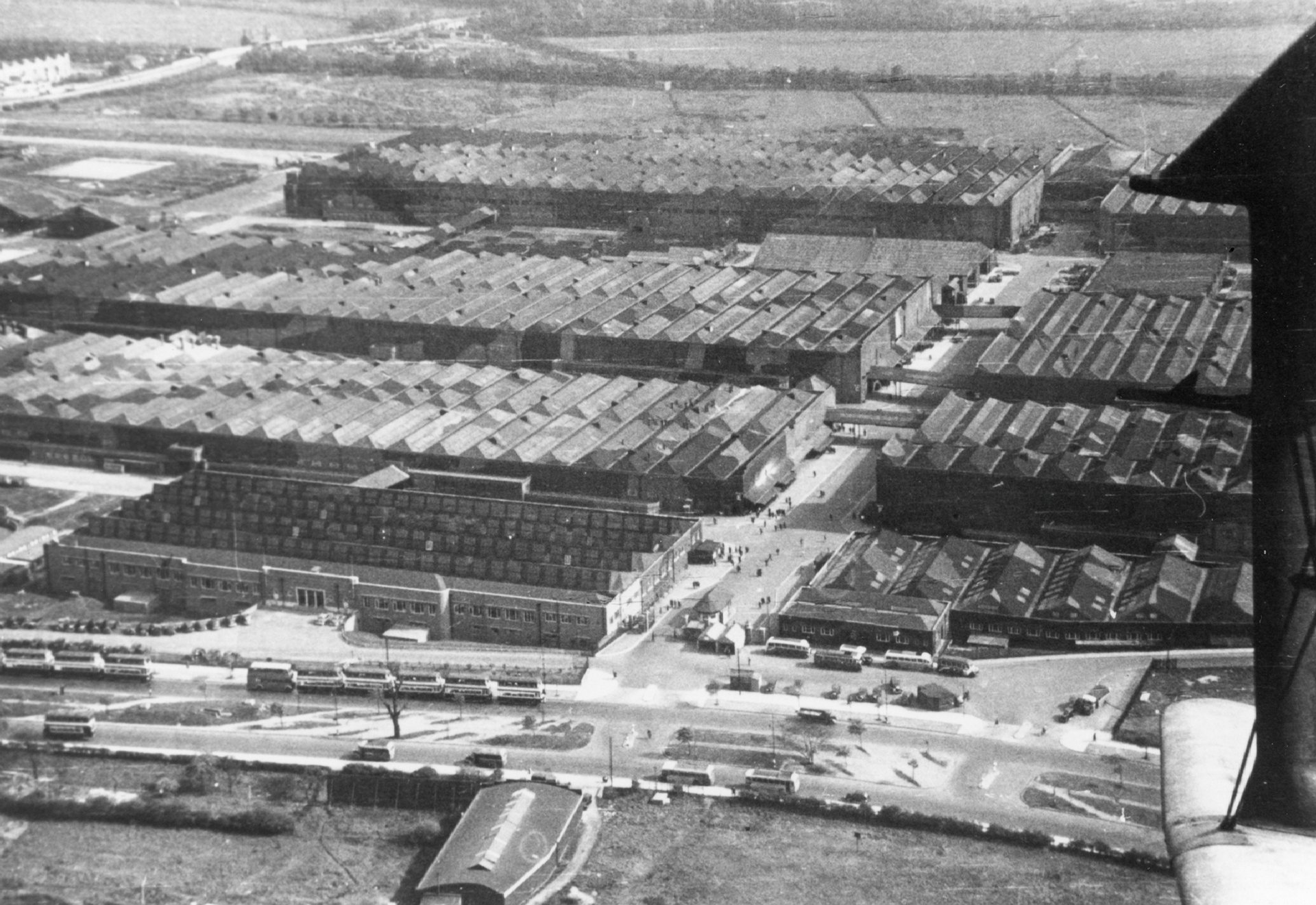 The main factory site from a DH Dominie; looking south towards the town of Castle Bromwich. Today the M6 motorway runs across the very top of the picture with central Birmingham off to the right.

Nuffield pulled out of the whole deal in the spring of 1940. He had clashed with Max Aitken, Lord Beaverbrook, the newspaper magnate nominated to run the Ministry of Aircraft Production. Establishing a factory of such spectacular size, setting up the machinery and getting the assembly lines rolling was a huge achievement, so Nuffield had not left his country in the lurch. His Morris Motors started to build Tiger Moths at Cowley in 1940, allowing de Havilland to concentrate on the incredible Mosquito at Hatfield.

Filling the void, staff from Vickers-Armstrongs took on the management of CBAF in May 1940. The first ‘Castle Brom’ Spitfire, Mk.II P7280, was delivered to Boscombe Down on June 27, 1940. It was the first of thousands. 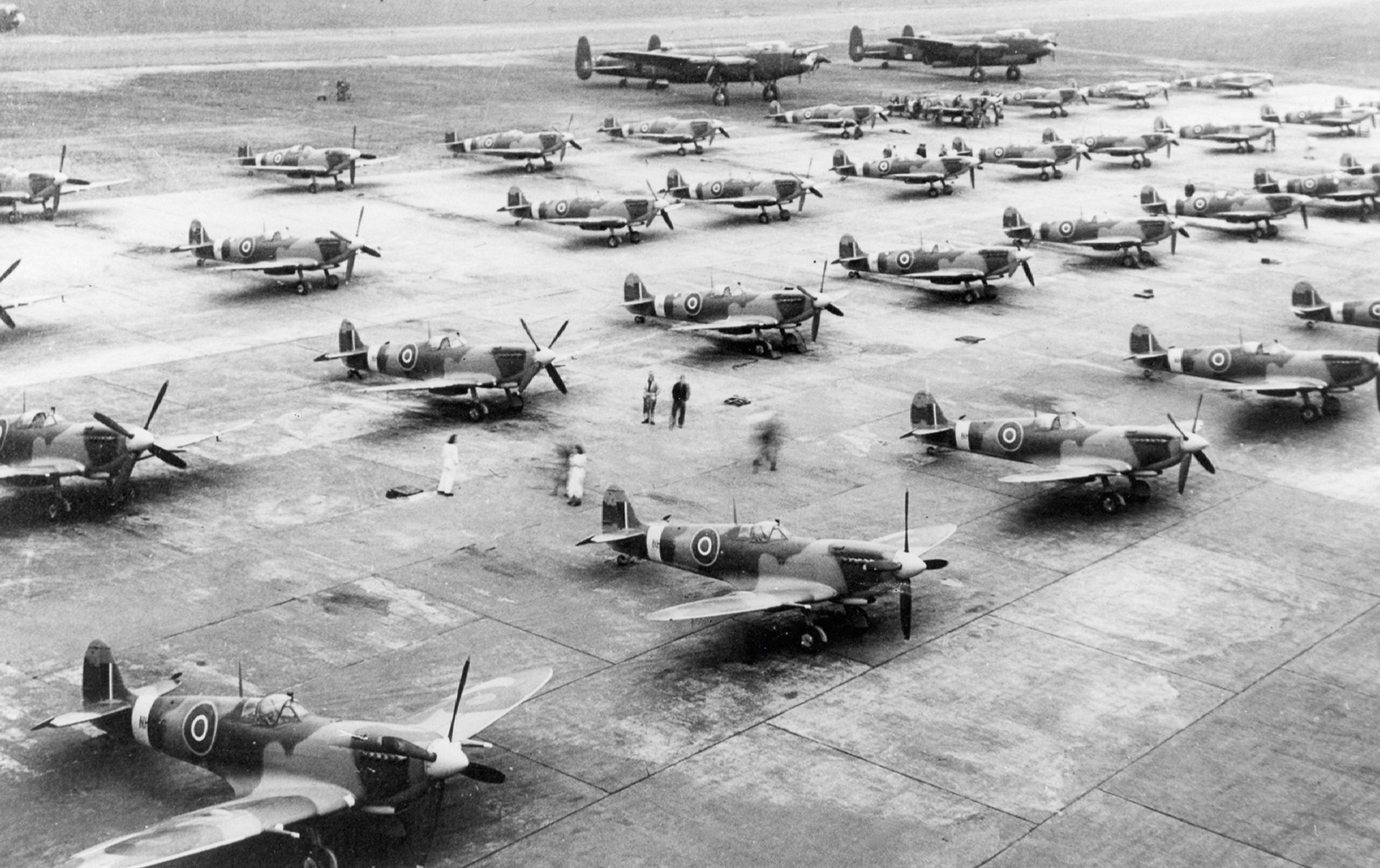 The flight line at Castle Bromwich in 1944 with massed Spitfire IXs and two Lancasters.

Synonymous with CBAF was its chief test pilot, Alex Henshaw, who had become a legend for his air racing prowess and long-distance flights. His greatest pre-war exploit was a record-breaking out-and-back flight to the Cape of Good Hope, South Africa in the diminutive single-seat Percival Mew Gull G-AEXF in February 1939.

Alex volunteered for the RAF in 1939, aged 27. While he was waiting for a reply, Vickers approached him to become a test pilot at Brooklands, checking out Wellingtons. Then he met Supermarine chief test pilot Jeffrey Quill who saw in Alex the perfect personality for the Spitfire. Jeffrey had him moved to Eastleigh and there Alex sampled the first of 2,300-plus Spitfires he was to fly. In his exceptional book Sigh for a Merlin, the love Alex developed for the fighter leaps out of every page, for him “it was a sheer dream”.

On June 1, 1940 Alex took on the flight test department at ‘Castle Brom’ and established a gifted team around him. Alex flew most of the 305 Lancasters that were also built at CBAF. At least once, Alex barrel-rolled a ‘Lanc’ and he described the bomber as finely tuned and exceptionally reliable. 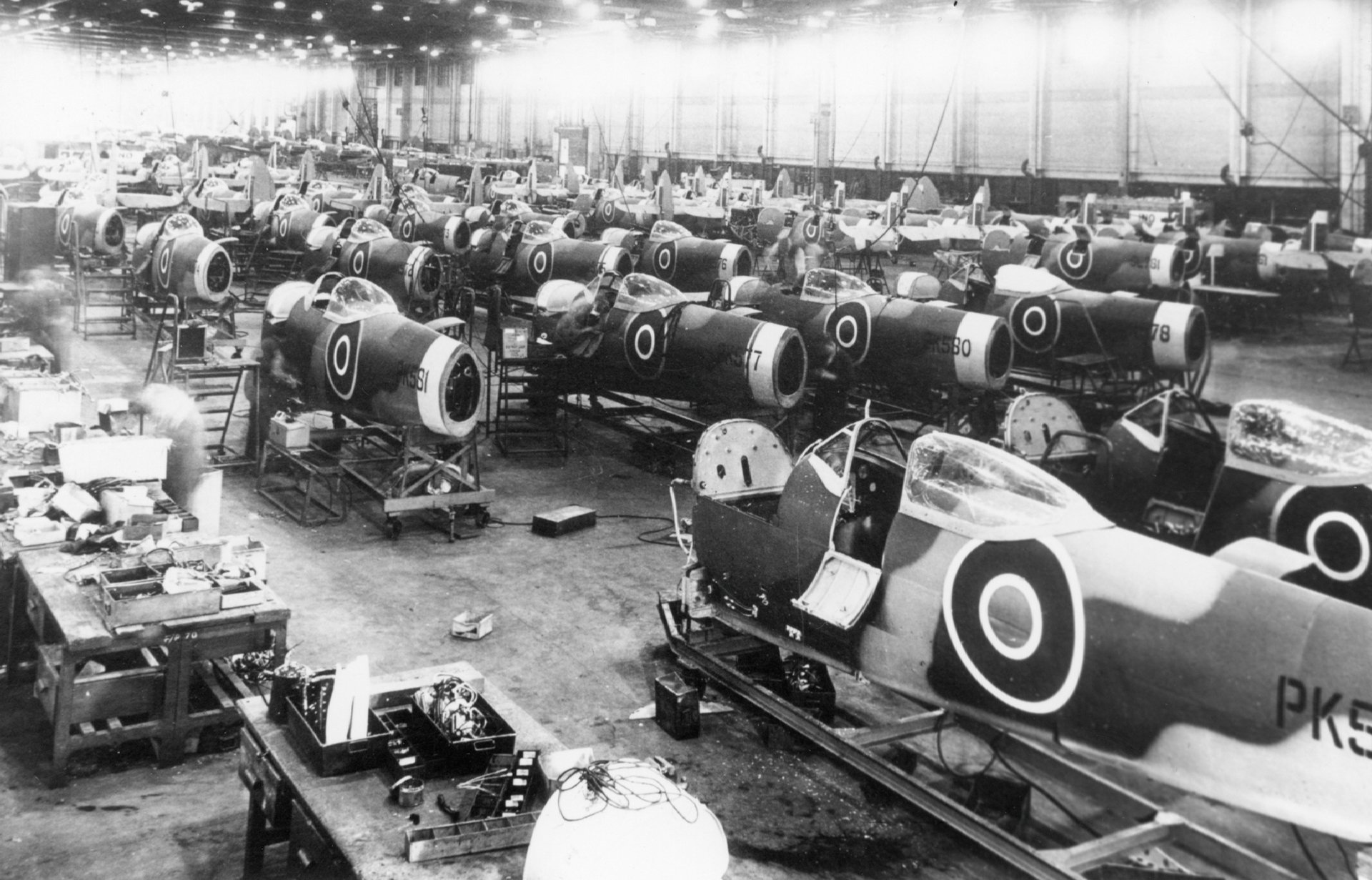 Spitfire F.22s on the line in late 1945.  Many of these were completed and flight tested at Keevil or South Marston as Castle Bromwich production wound down. In the middle on the left is PK581, which was issued to the RAF in October 1945.

There are many stories of Alex’s time at CBAF – but just two more will have to suffice. To launch Birmingham’s Spitfire Fund, the Lord Mayor invited him to carry out a flypast alongside the town hall in front of gathered honoured guests and the public. It was September 18, 1940 and Alex made an unforgettable ‘entrance’ in Spitfire II P7426. Flying inverted at high speed, the fighter was below roof height! The mayor was not best pleased. To quote Alex’s logbook: “Instructed to demonstrate over Birmingham. Chaos ensued!” 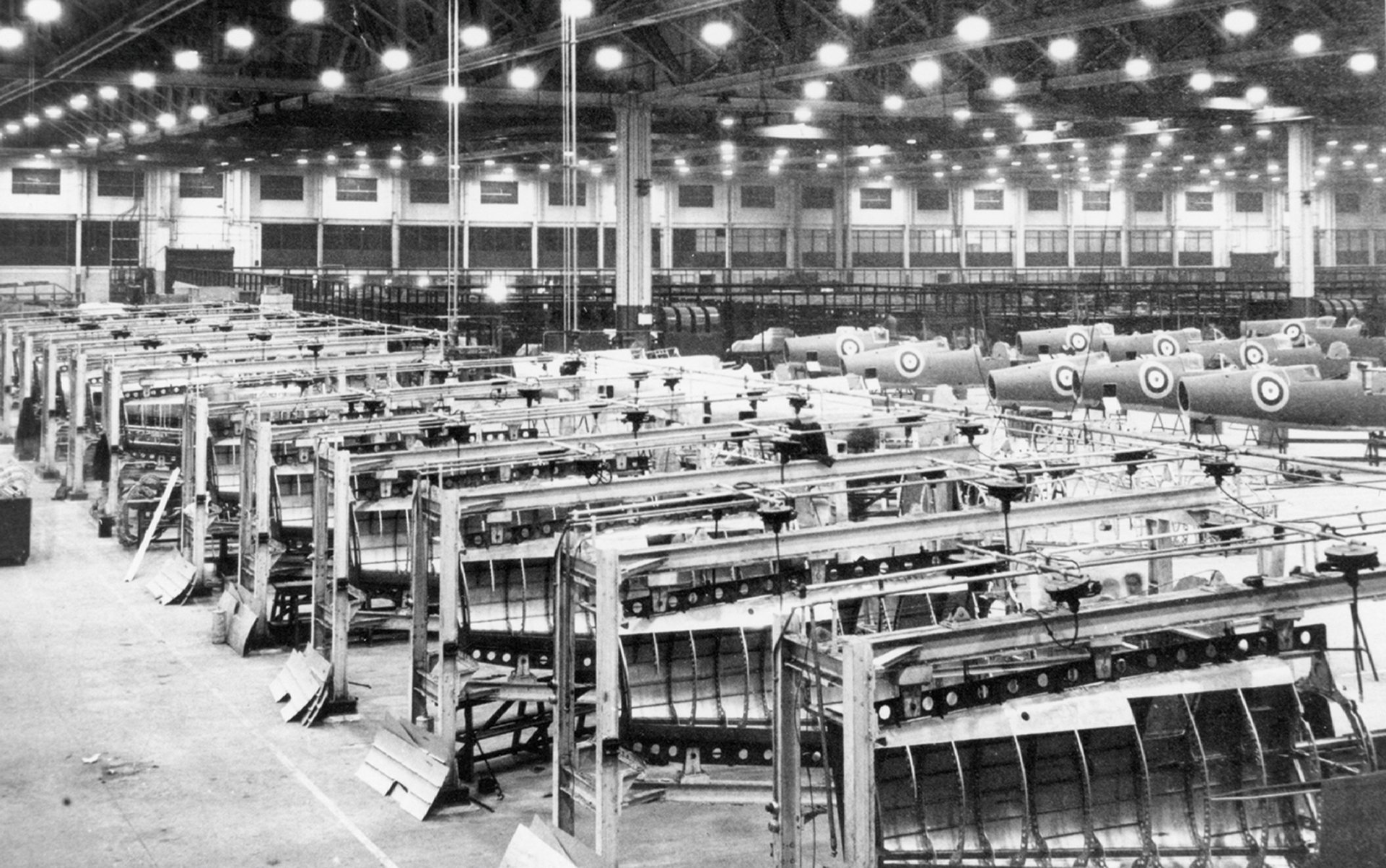 Fuselage jigs in the foreground with completed and painted fuselages behind.

Testing Spitfire IX MJ190 on October 13, 1943 the engine broke up while Alex was flying at 470mph (756km/h). The entry in his fifth logbook makes a terrifying experience seem almost run-of-the-mill: “Flung out of machine with badly torn parachute. Three complete panels missing and canopy held together by slender pieces of thread for 15,000ft.” 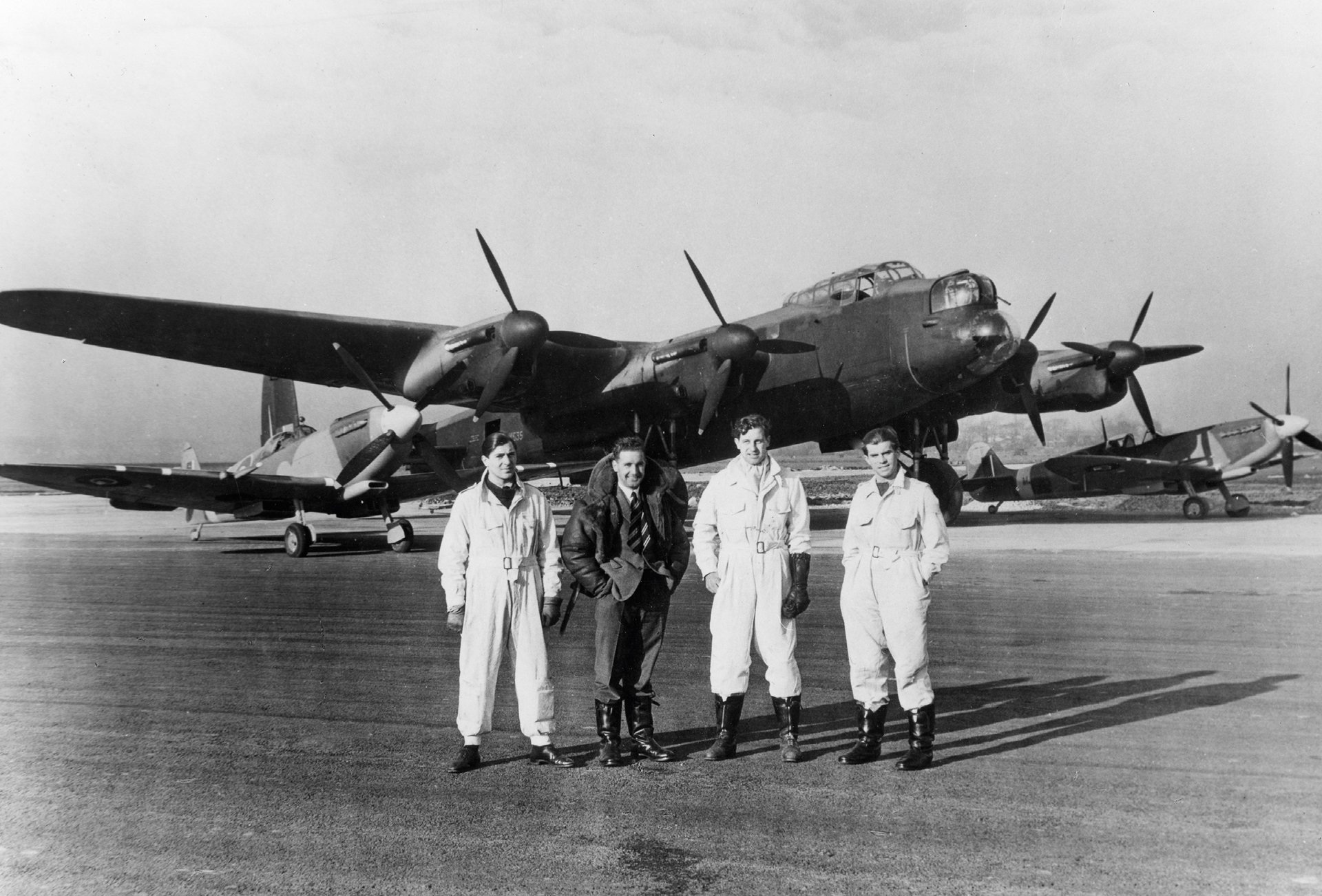 Statistics for output at CBAF vary and are hotly disputed in some quarters. Turning to the last page of Henshaw’s Sigh for a Merlin, the great man sums up CBAF Spitfires as follows: 11,694 Spitfires built (including the dispersal factories at Cosford and Desford that CBAF oversaw), requiring 33,918 test flights to sign them off ready for collection by the RAF. 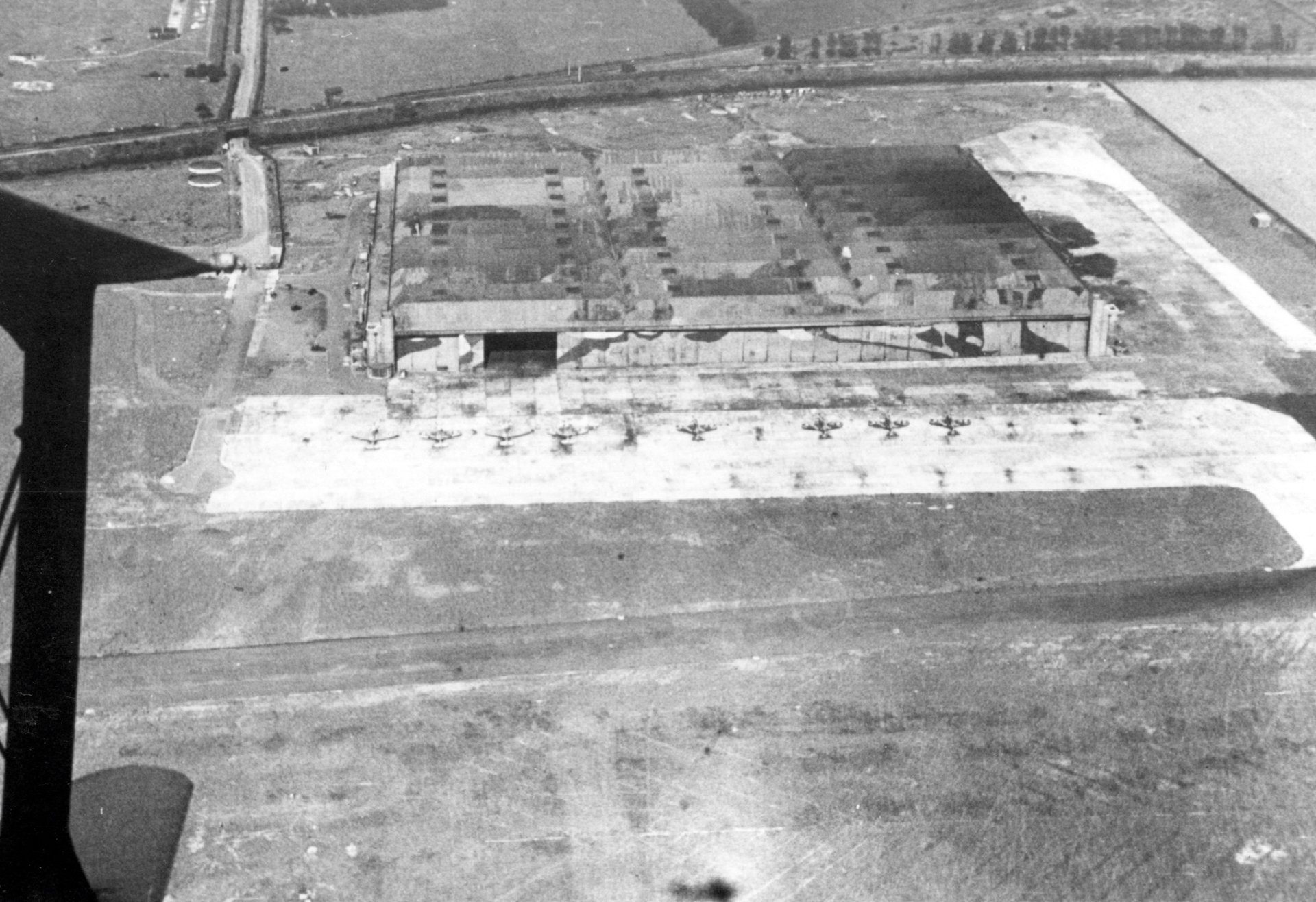 The last complete Spitfire flown from Castle Bromwich was Mk.22 PK614 on November 30, 1945. It was issued to the RAF in January 1946. Since Mk.II P7280 emerged in June 1940 that makes an average of just shy of 45 Spitfires a week.
Fuselages and sub-assemblies continued to be put together as production tapered out. The last fuselage down the track was Mk.22 PK726, which was destined to be completed as an Mk.24 at South Marston in March 1946. This machine was bedecked with comments and poems by the CBAF workforce, one of which was full of hope that another type would be built on the site: “This is the last, this is the end. After many an ache, many a bend. We pass it to you without any tears. For we may ‘Meteor’ yet in future years.” 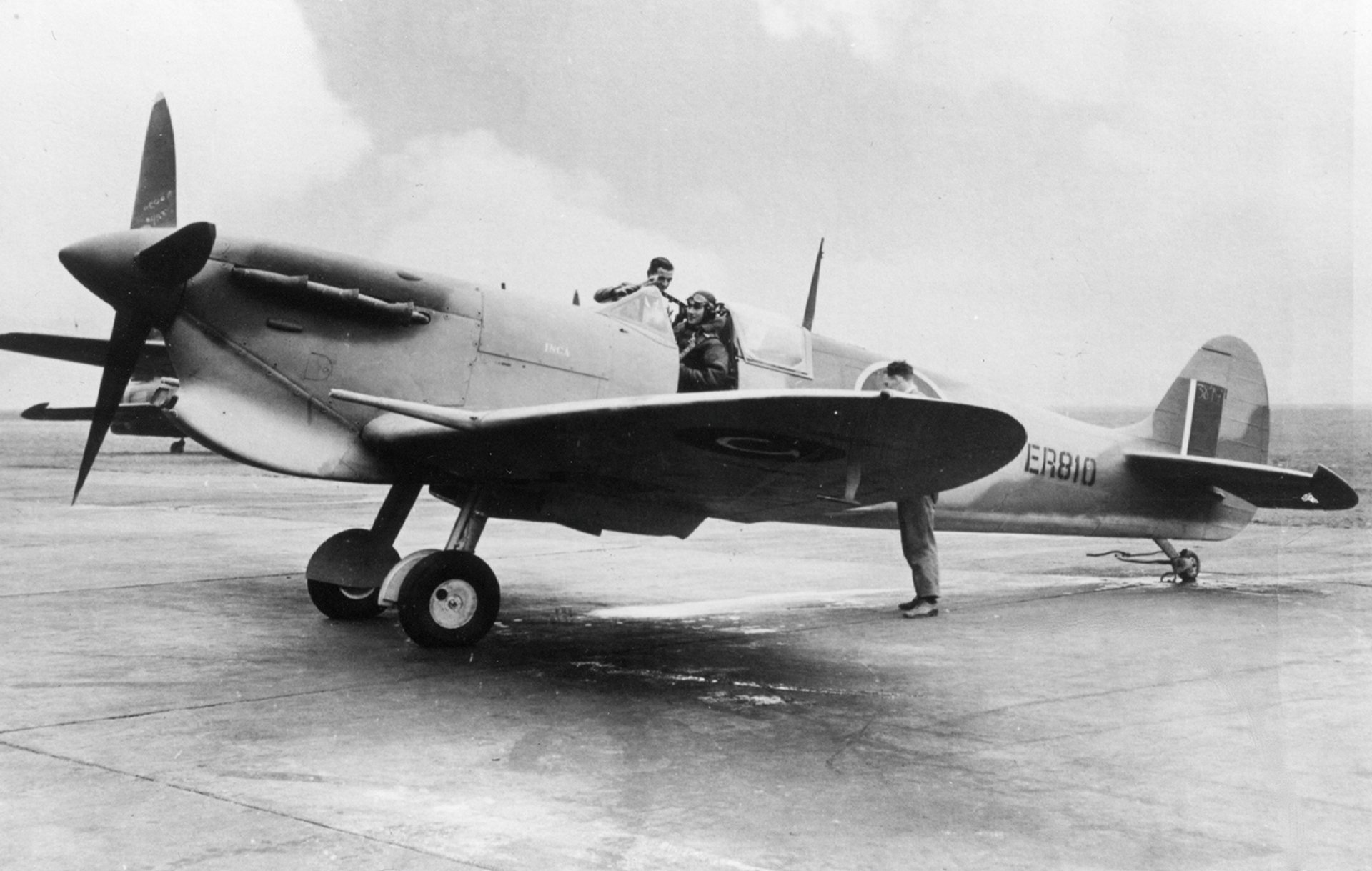 Tropical filter-fitted Spitfire V ER810 at Castle Bromwich in October 1942. It carries the name ‘Inca’ on the forward fuselage, funded by the people of Lima, Peru

Birmingham was blitzed by the Luftwaffe several times from 1940 through to 1943, with horrific loss of life and property. The Castle Bromwich Aircraft Factory (CBAF) was on the receiving end on the night of August 13/14, 1940, just a fraction of the damage is illustrated below. Seven people perished in the raid and another 41 were badly injured, but production was hardly interrupted. 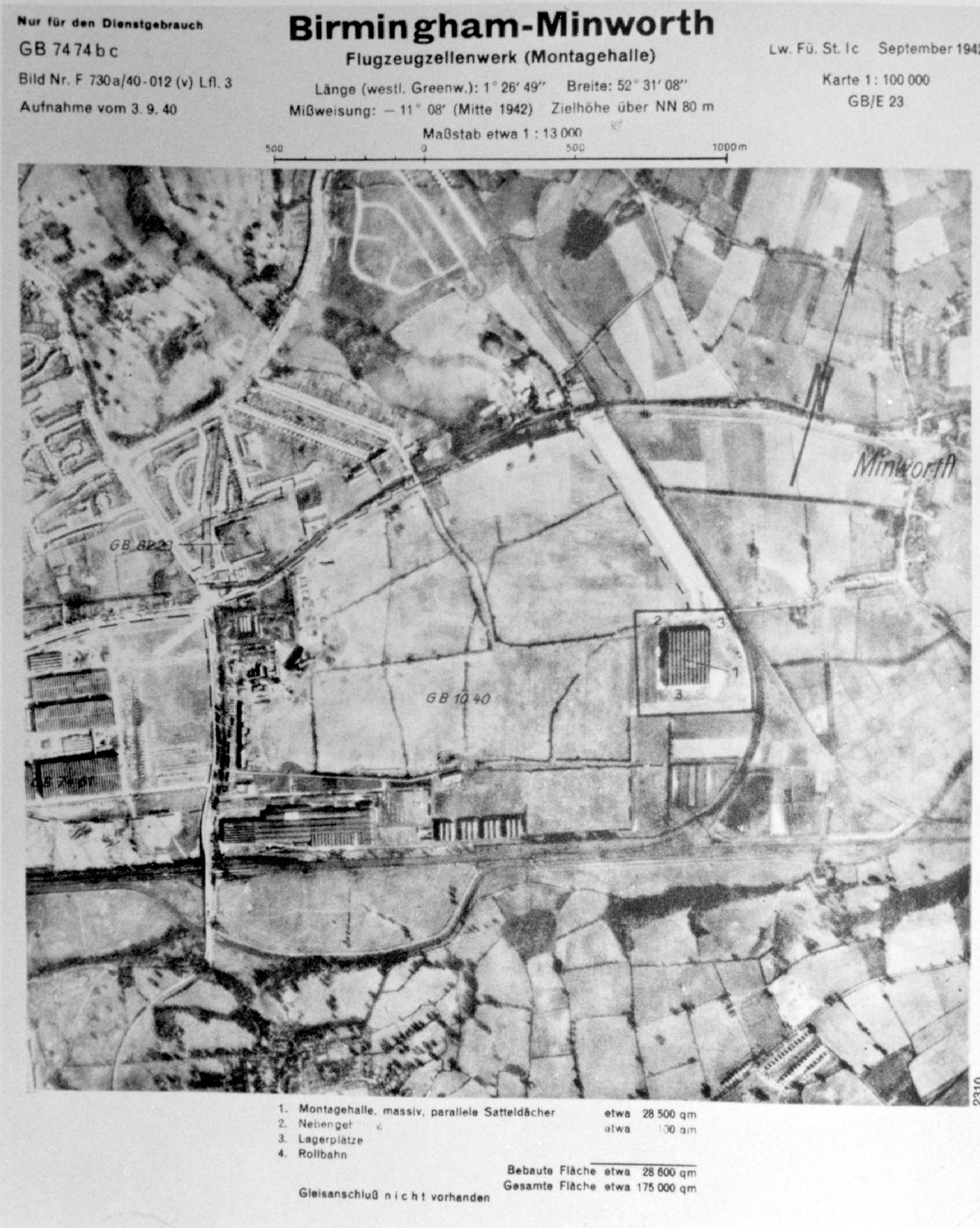 A Luftwaffe target chart (above), dated September 3, 1940 was probably taken for post-raid damage assessment and it was updated in September 1942. Clear on the chart is the railway line running from the northwest, with one section taking a sharp curve to the east, in the direction of central Birmingham. This acted as the eastern and southern boundary of the airfield and factory site. Wending its way across the middle of the target, and forming the northern boundary, is the Birmingham and Fazeley Canal. On the extreme lower left is part of the huge CBAF site and to the right of that the British Industries Fair building. 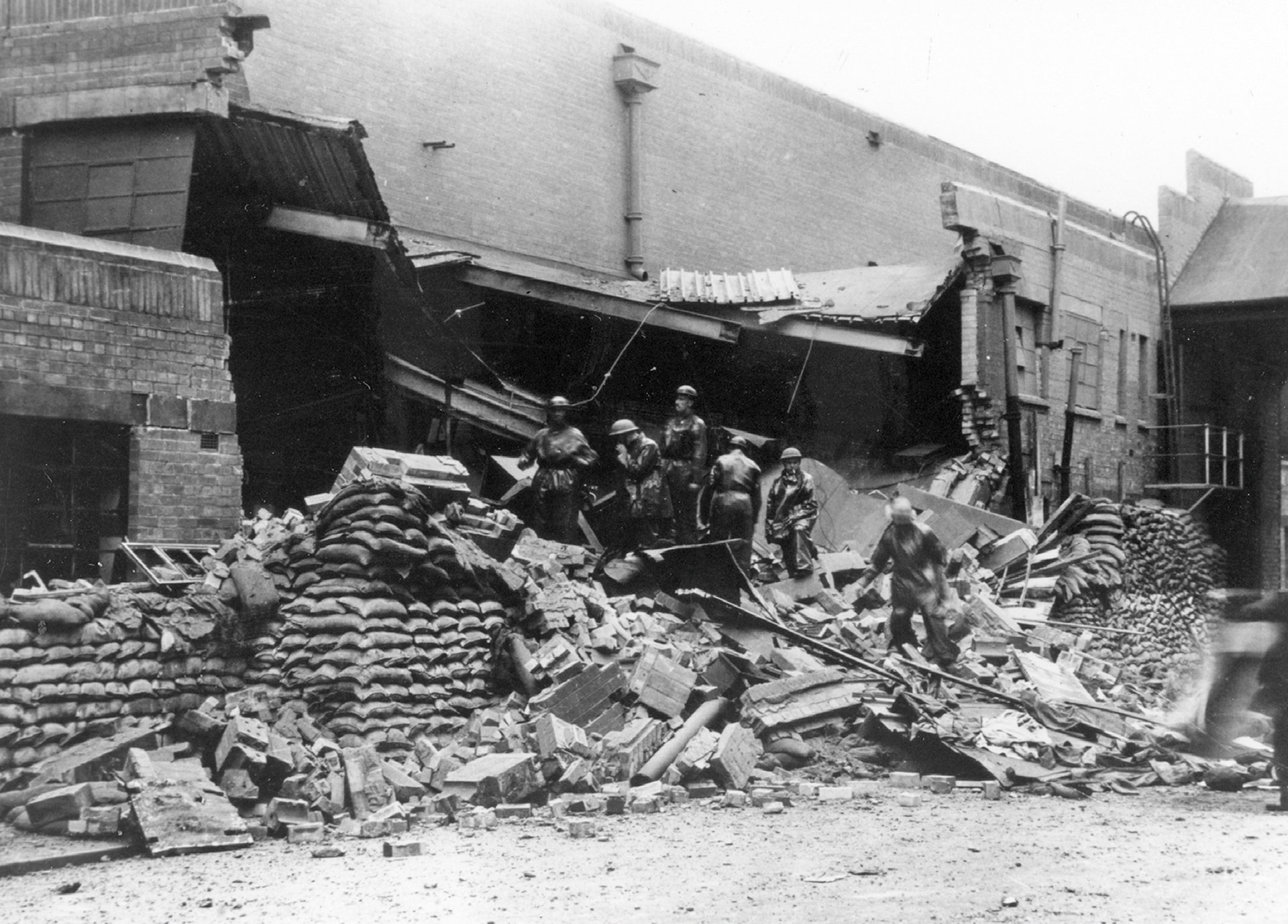 In the centre is the all-grass runway – ‘Rollbahn’ – complete with ‘hedges’ painted on the airfield as camouflage. Opposite is the square flight shed which the Luftwaffe labelled as a ‘Montagehalle’ (assembly hall) surrounded by a ‘Lagerplatze’ (stockyard, perhaps more appropriately flight line or ‘ramp’).