Inside the world’s biggest aircraft carrier

The USS Gerald R. Ford has space for over 75 aircraft, has 11 Advanced Weapons Elevators, and needed 220,000 gallons of paint – enough to coat the White House 350 times

It is hard to get your head around just how long the USS Gerald R. Ford is, so this might help. At 1092 feet or 332 metres, it is longer than three football pitches. Working on the best times he recorded during his athletics career, it would take peak-era Usain Bolt approximately 35 seconds to run the length of it. The 1200bhp Bugatti Veyron would take around nine seconds to cover the same distance.

Named after the 38th President of the United States, this is the sheer size that makes the USS Gerald R. Ford the largest aircraft carrier in the world. Launched in 2013 and commissioned by President Trump on July 22 2017, the Northrop Grumman-designed ‘supercarrier’ – due to set sail for its first deployment in 2022 – has the capacity to load over 75 aircraft on deck and internally, with an ability to launch 220 air strikes per day. This means response time to any military operation is significantly reduced. 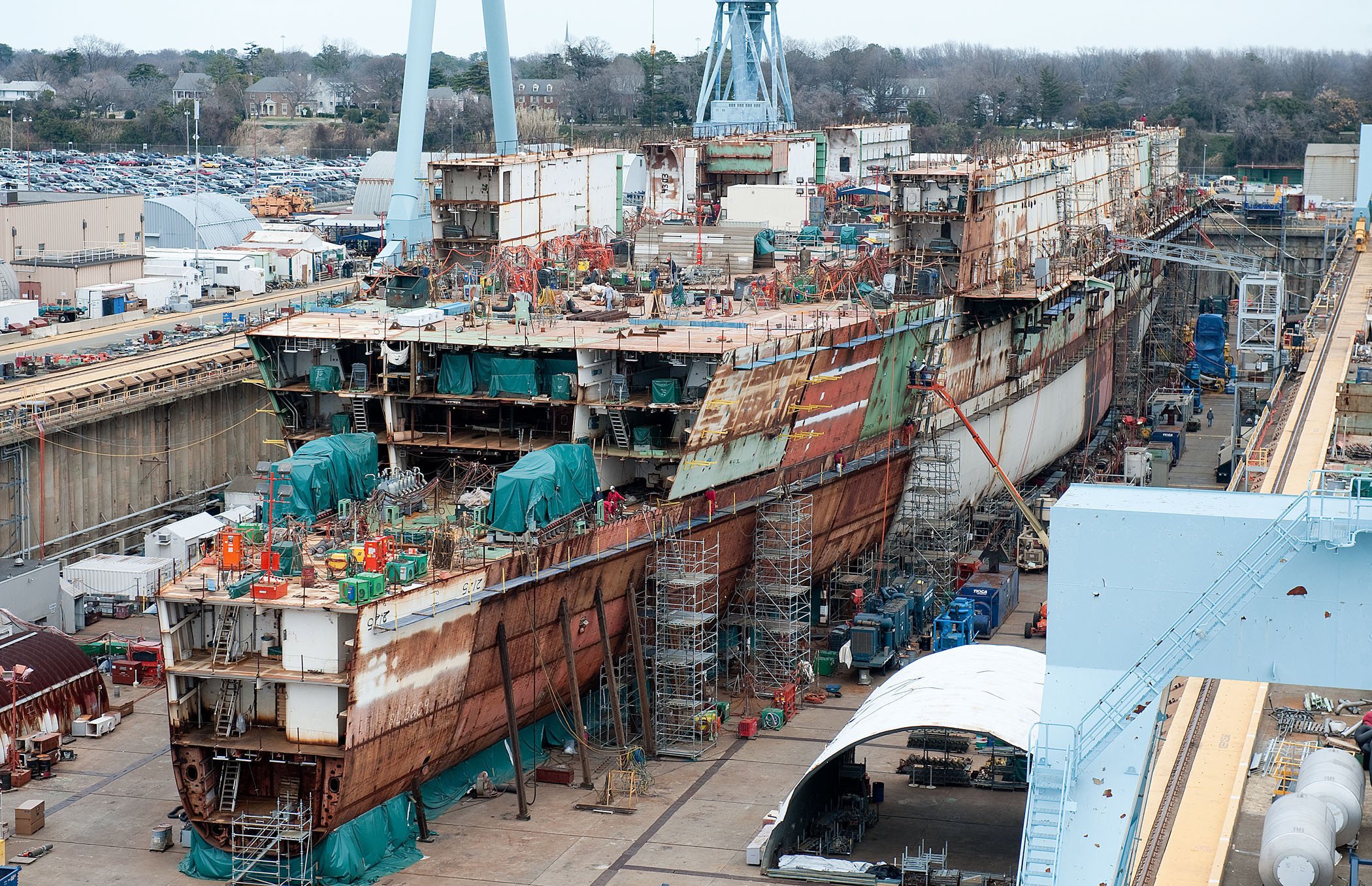 The USS Gerald R. Ford under construction back in 2012.

In turn, the Ford-class can carry a range of aircraft, including the F-35C Lightning II, the F/A-18E/F Super Hornet, the EA-18G Growler, the MH-60R/S helicopter and many others. It can also launch Short Take-Off and Vertical Landing aircraft. According to various reports, the ‘supercarrier’ took 5,000 shipbuilders to complete and used 200,000 gallons of paint to cover – enough to coat the White House 350 times. It is expected to have a life span of 50 years and will eventually replace the Nimitz-class as the primary US Navy carrier. 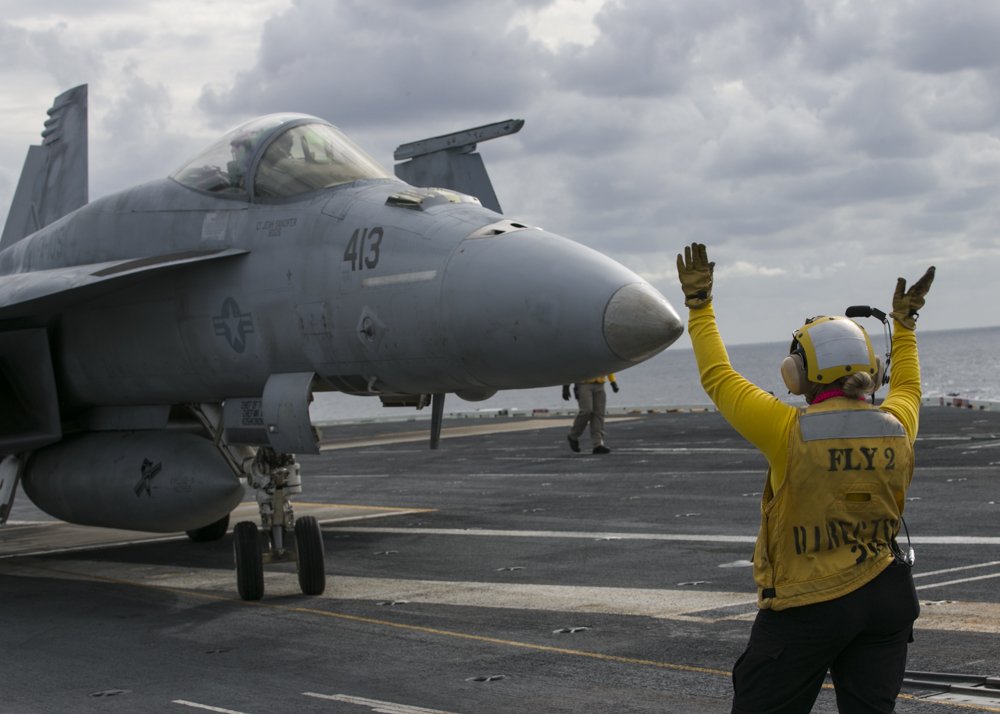 The Ford-class carrier also has a jaw-dropping weight, coming in at 100,000 tons – over 400 times that of the Statue of Liberty. With a crew of over 4,500, the USS Gerald R. Ford is hailed as the future of the US Navy and a more advanced carrier than its predecessor, the USS Nimitz. The aircraft carrier can travel at a top speed of over 30 knots (35 miles per hour), but it overshadows the Nimitz-class in its ability to increase the number of possible sorties by 25 per cent – the result of a smaller ‘island’ which increases space for flight-deck operations.

Unique to this ‘supercarrier’ is its replacement of steam power with electric. Currently, all carriers in the US Navy are operated on steam lines, but the USS Gerald R. Ford will be the first to replace this, with all hydraulics also being eliminated and substituted with electric actuators. The introduction of the electromagnetic-powered aircraft launch system (EMALS) carries hopes of an improvement on the Nimitz-style steam-powered catapults. EMALS is expected to increase accuracy in end-speed control and provide a smoother acceleration. It is also able to launch a variety of current and future aircraft, from unmanned aerial vehicles to heavy strike fighters. 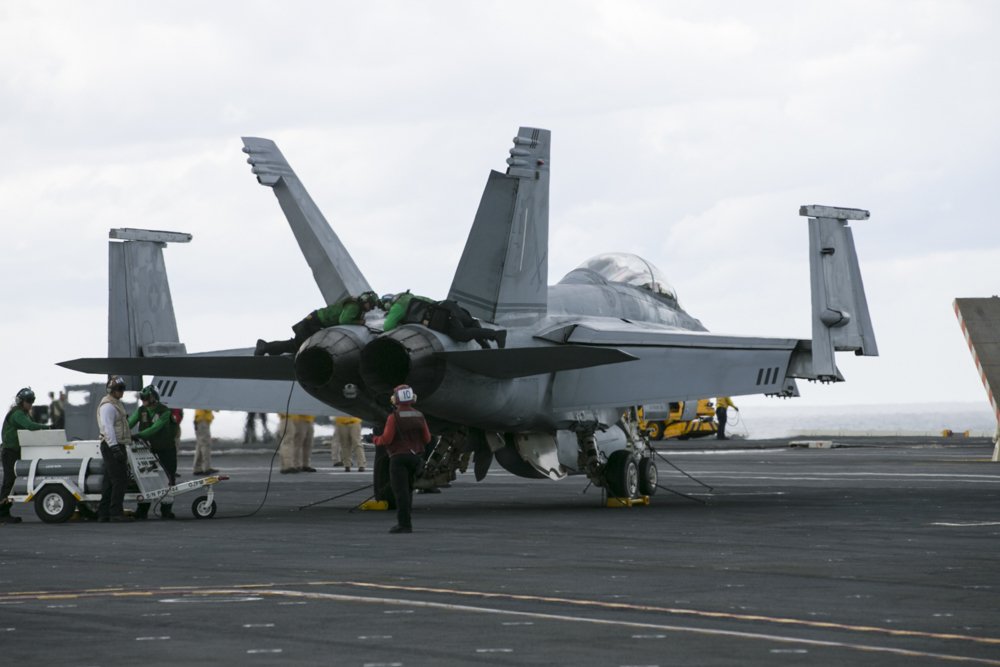 Testing and evaluation aboard the aircraft carrier.

It is clear that the US Navy has considered efficiency and resilience in its planning for the USS Gerald R. Ford. Improved hull design, fire-fighting systems, corrosion control, and 11 Advanced Weapons Elevators that use monorail technology mean that the ship is expected to have increased survivability in comparison to any of its predecessors. Developments in technology have meant that this class will have a deeper focus on automated gear, meaning manpower requirements can be lessened. Additionally, stealth technology has been upgraded to ensure the ship’s radar signature is reduced and the quality of life for crew has also been improved, with modernised gyms, ergonomic workspaces and improved berthing compartments.

However, despite the talk of this new ship being an upgrade, it has not been without its setbacks and difficulties. The $13 billion carrier has struggled with development issues, which have seen its price soar and schedules delayed. In particular, the Ford-class’ Advanced Weapons Elevators, a critical brand-new piece of technology that moves munitions to and from the flight deck, are behind schedule. The US Government Accountability Office has said it is currently assessing methods in tackling technological flaws and hopes to have the issues fixed as soon as possible. Shock trials are scheduled for the coming year, with these assessing how well the supercarrier withstands underwater explosions.

The Ford-class supercarrier looks a step forward for the United States military. With technological advances and significant improvements in efficiency, a new era is swiftly approaching. 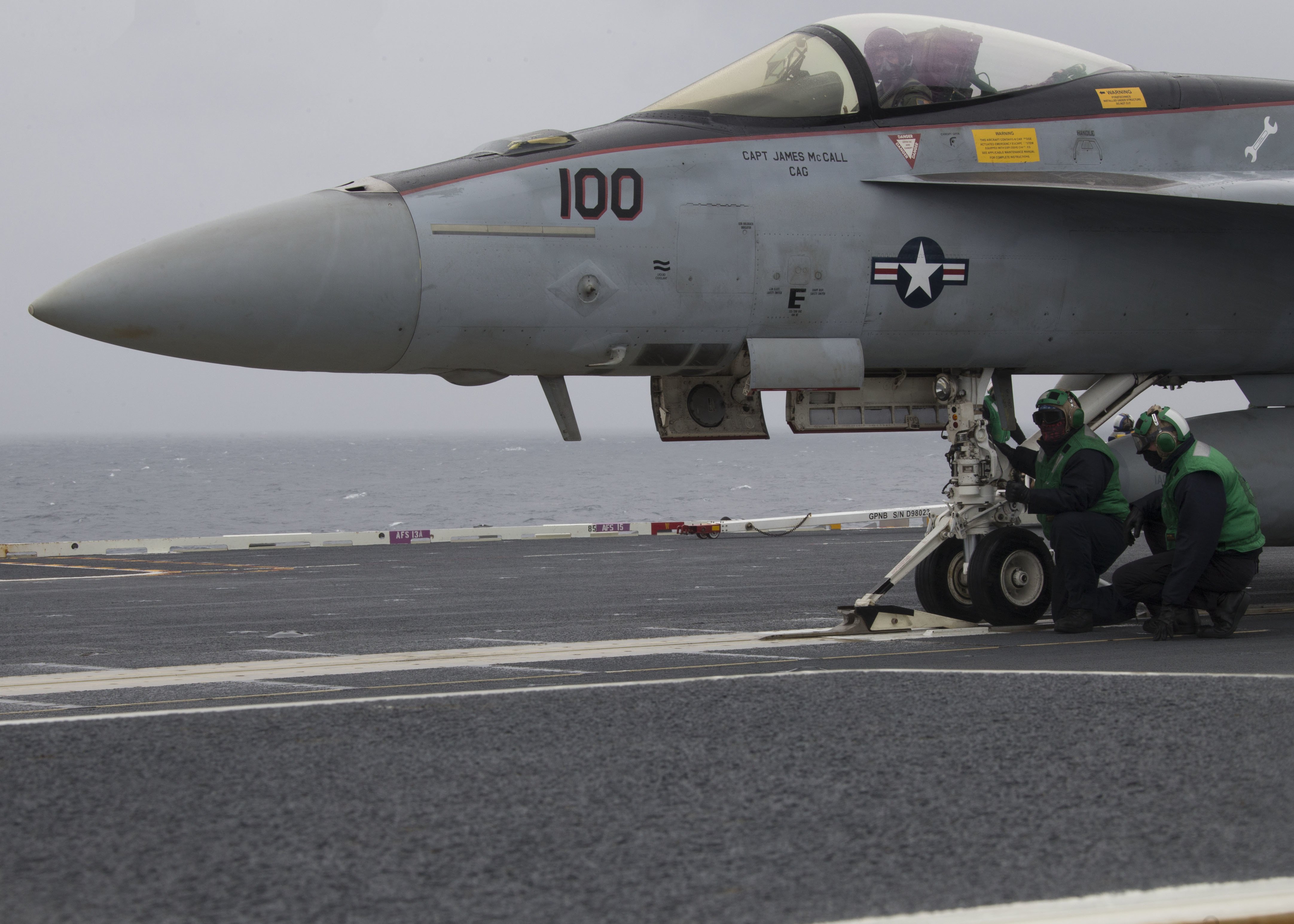