Inter-operating with the F-35 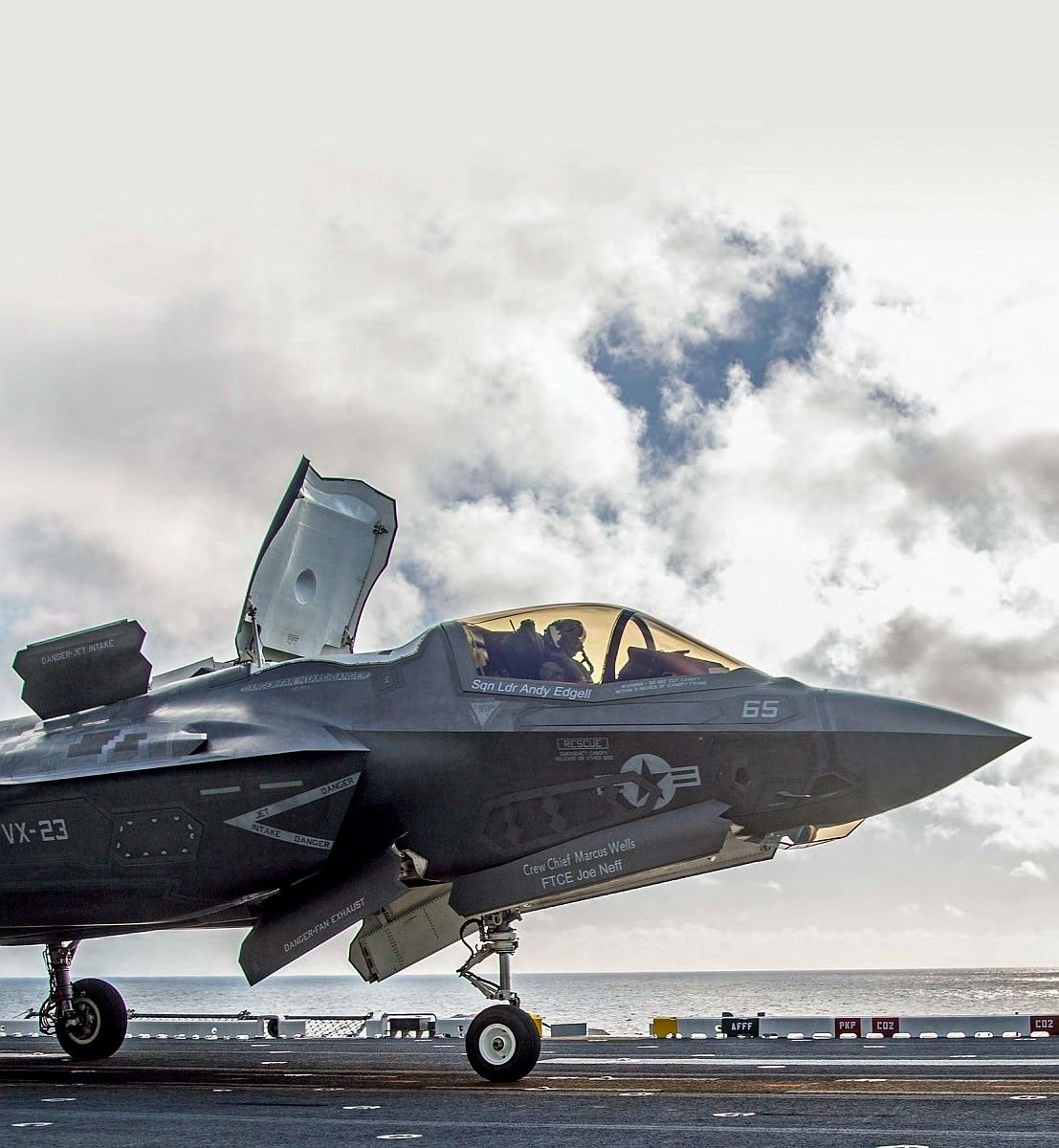 Synthetic training continues to play a vital role in the development of Royal Navy Observers serving with the Sea King Airborne Surveillance and Control (SKASaC) force and 849 Naval Air Squadron (849 NAS) based at Royal Naval Air Station Culdrose in Cornwall. Following the loss of both the Harrier Force and the UK’s Invincible Class aircraft carriers, the SKASaC force sought alternatives to provide the high-quality fast-jet training it needs as it builds towards Crowsnest, the Royal Navy’s future maritime intelligence, surveillance, target acquisition and reconnaissance capability (see AIR International, June, p86–91). With only seven Sea King ASaC7s on strength, synthetic training not only provides a cost-effective training option, but also helps protect the aircraft fleet. Most importantly, it also provides the force with access to complex multiplatform exercises it could not otherwise participate in. Not only is this activity crucial in retaining and building specific Crowsnest command and control experience, it is also enhancing awareness and value of their skill set within the fleet as they transition to the UK’s new carrier strike era.

Royal Navy Observers will deliver much more when Crowsnest is operational. For now, synthetic training is increasingly being used alongside live field exercises to develop the necessary skills future Observers will need as they prepare to work alongside the UK’s Queen Elizabeth Class aircraft carriers and F-35B Lightning IIs scheduled to enter service in the early 2020s.

The squadron’s synthetic training within the SKASaC community took a dramatic leap forward during May 2016 when the squadron participated in the first of a series of groundbreaking training events called Virtual Fury. The exercise was facilitated by the Lincoln, UK-based defence company Inzpire, which provides consultancy and training services, as well as developing software applications for military customers. Inzpire used a temporary data connection between the Air Battlespace Training Centre (ABTC) at RAF Waddington in Lincolnshire and the Maritime Composite Training System (MCTS) at HMS Collingwood near Fareham in Hampshire. This is a virtual battle space training centre run by Babcock International on behalf of the Royal Navy.

The main objective of this Virtual Fury was to provide vital pre-deployment training to Type 45 Air Defence Destroyer HMS Defender (D36), but it has since developed further. Virtual Fury 2016 ultimately delivered team and collective training simultaneously to crews from Typhoon FGR4, Tornado GR4, E-3D Sentry AEW1, HMS Defender and SKASaC crews for the first time. For 849, the exercise provided exposure to complex, real-world air, land and maritime challenges that cannot be achieved in the live flying environment.

The Agile Thunder series of exercises is designed to investigate network centric warfare and 849 NAS has aspired to participate in federated training since it was first generated by the UK F-35 Integrated Project Team. A federated training model is based on a small core of technology managers who facilitate other entities to run their own training programmes.

Aircrew have participated in various datalink trials associated with the UK F-35 interoperability (IO) trials programme run by BAE Systems based at Salmesbury in Lancashire. An early iteration of Agile Thunder was developed by BAE Systems specifically for this IO trials programme. With the facilities established enabling participants to share data, 849 took part in its first such Agile Thunder exercise in 2014. Since then, the squadron has joined in most iterations of Agile Thunder, the latest in April 2017, which involved a Sea King ASaC7 supporting F-35B Lightning IIs in an air-land integration scenario.

Each exercise is designed to validate the information exchange requirements and concept of operations for specific mission sets and consists of two stages. The spiral engineering test stage establishes connections between the participating platforms and verifies data flow and control function are correct. This is followed by the testing stage during which real ‘operatorsin- the-loop’ are linked together using their respective tactical datalink system to conduct mission-orientated trials in representative and emmersive scenarios.

At the heart of this trials process at 849 is Lieutenant Commander Dicky Lewis, an Observer with over 30 years’ operational and flight training experience. Lt Cdr Lewis has flown from all three Royal Navy aircraft carriers since 1986, serving with all three SKASaC squadrons (849, 854 and 857 NAS). His operational experience includes working in the former Yugoslavia, a three-year exchange with the US Navy flying the E-2C Hawkeye, and flying in support of Operations Herrick (Afghanistan) and Kipion (Persian Gulf and Indian Ocean).

Lt Cdr Lewis explained the background to the trials: “This element of the F-35 UK IO trials programme required participants who could meet the F-35’s stringent security requirements, were Link 16 tactical datalink capable and who in the long term, will be required to link with F-35 during future missions to securely exchange NATO standard messages between them. These trials aim to de-risk F-35 from a communication and data transfer perspective. These messages could be those required in support of, for example, air defence, close air support or combat air patrols.”

The trials process operates via the secure Joint Multi-National Interoperability Assurance Network [JMNIAN] and the Multi-Link Test Facility [MLTF], which then provides a secure ethernet link into other secure off-site simulators, such as 849’s FMT at Culdrose. The MLTF is provided by software managers SyntheSys based in Whitby, North Yorkshire, who provide the software interface connecting the Culdrose FMT to JMNIAN. The UK and US ‘secret’ eyes-only requirement of these trials requires all participants to be able to lock down their simulation site, speak the same language and, using their Link 16 terminals, exchange the same information.

Prior to the first event, there were concerns that the FMT might have compatibility or other technical issues with the ABTC or MCTS. Having identified some minor software updates and implementing them to ensure the squadron could achieve the appropriate connectivity, these were quickly resolved.

From a connectivity perspective, the benefits of virtual training are enormous, as it helps participants destined to work with the F-35 to establish procedures. It also helps build awareness and relationships between participants who will need to work together in the future.

The objective is to test every single command, instruction and request the F-35 would expect to use. The process is laborious, but has been successful from a training and engineering perspective, highlighting issues that have now been resolved.

Link 16 is a military tactical data exchange network used by NATO and other nations facilitated by the Multifunctional Information Distribution System International Program Office that enables military aircraft, ships and ground forces to exchange tactical data in virtually real time, unlike Link 11 used by the Merlin HM2 fleet. Link 16 supports the exchange of text messages and imagery and contains digital voice channels. The message sending format use J-series messages, which are binary data words grouped into functional operational areas (such as precise position location indicator or PPLI, surveillance, aircraft command, and electronic warfare) to participating network group members. Each message has a well-defined meaning known to them.

Whilst J-series messages are standardised, how each platform presents and receives a message may differ depending on the platform. For an example, SKASaC is primarily a surveillance platform and therefore will filter out the functional areas it has no need for. Likewise, for F-35, which may have no need for surveillance data. The real benefits of Link 16 and this testing were clarified by Lt Cdr Lewis, who said: “With my C2 [Command and Control] hat on and active in the network, I will see all the Link 16 players active in the link. Using PPLI, I can not only see my own mission and operational data, but also other aircraft data. With F-35s, I can see, for example, where they are, their operational speed, height and weapons carried. On Typhoon, for example, I can see what weapons they have on which stations, how much fuel they have and based on this as an Observer, I can determine which Typhoon amongst a group performing a CAP [Combat Air Patrol], say, is best placed to take on a mission. To do this, it is absolutely essential the HMI [humanmachine interface] for Crowsnest is well designed and we can process this type of data quickly and efficiently.”

The scale of this task carried out by two Observers in the rear of a helicopter is astonishing. They are effectively undertaking the combined maritime surveillance and land air defence roles presently performed by many more operatives positioned aboard a range of maritime and land surveillance aircraft. This is achieved through high degrees of automation and mission system design permitting the Observers to process large volumes of information quickly.

Lt Cdr Lewis said: “The testing has proved to be incredible not only from the data transfer perspective, but also highlighting how labour intensive some of the actions are on other platforms. I can remember working with a NATO E-3A crew on their simulator. Changing the symbology on an air track [changing it from neutral to hostile and back] took them many minutes, whereas it is a simple keystroke for us. The series of exercises not only provide exposure to F-35 software, [but also] engineers now realise this is the way forward for other platforms.” 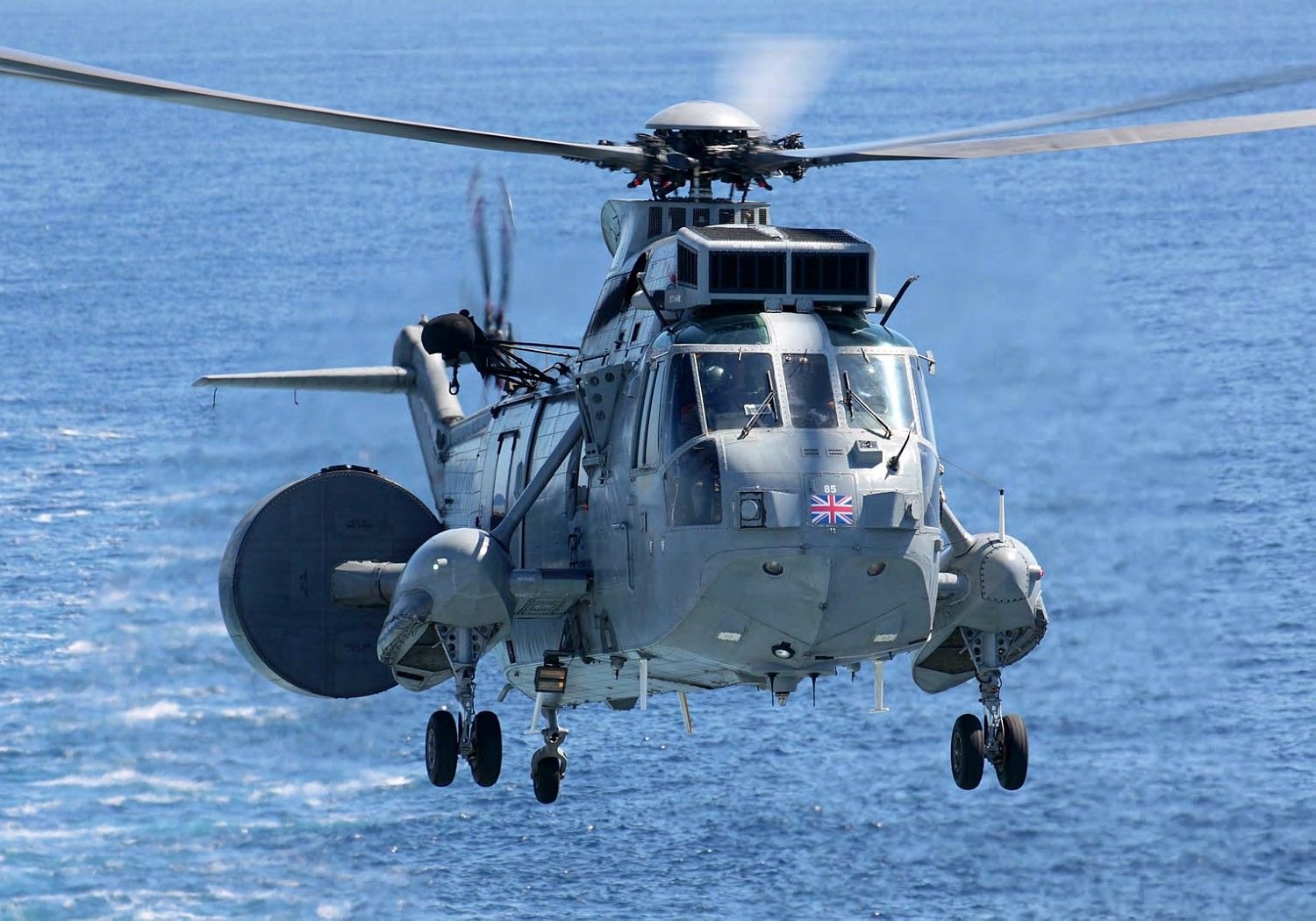 Building heavily on previous exercises, Virtual Fury 2017 in June took exercise testing to a new level and evolved it into a virtual warfighting exercise. Run by the ABTC, the main exercise objective was to train Typhoon crews ahead of an operational work up overseas. In addition to 849 acting as a Crowsnest system, participants also included two Type 45 destroyers (with two full operations teams based at the MCTS in Collingwood), four virtual Typhoon cockpits and one E-3 AWACS, virtual Canadian CF-18 Hornets and undisclosed US participation, all linked through the JMNIAN line.

Lt Cdr Lewis said: “This is the way forward and we are learning all the time working alongside F-35 pilots. Representatives from the Crowsnest combined test team are embedded with us at Culdrose. We feed back any issues we have with the link, such as how the link commands work, whether they make sense, whether they were intensive. There are elements of how Observers use the command ‘switchology’ that didn’t make sense initially that we have now resolved during Agile Thunder. This testing is enabling us to improve things ahead of Crowsnest service entry.”

The clear message is the system is benefiting from being developed and enhanced by operators who will use it in concert with system engineers rather than solely by the engineers.

The squadron is due to participate in Agile Thunder 10, when it will conduct its first overseas connection to allied naval assets.

There is a clear momentum here that must not be lost, especially when one considers that the Sea King ASaC7 out of service date is in Q3 2018 and Crowsnest will not be reach full operational capability until 2022.

Testing will have to be maintained and developed well into the future for both F-35 and HMS Queen Elizabeth.

The major lesson of the UK’s 2010 Strategic Defence and Security Review is how critical it is to maintain continuity in training. Exercises like Virtual Fury and Agile Thunder demonstrate the value that synthetic federated training can deliver, especially as 849 NAS tries to re-generate skills ahead of the in service date of the Crowsnest system.