From Intercontinental to Island Hopping 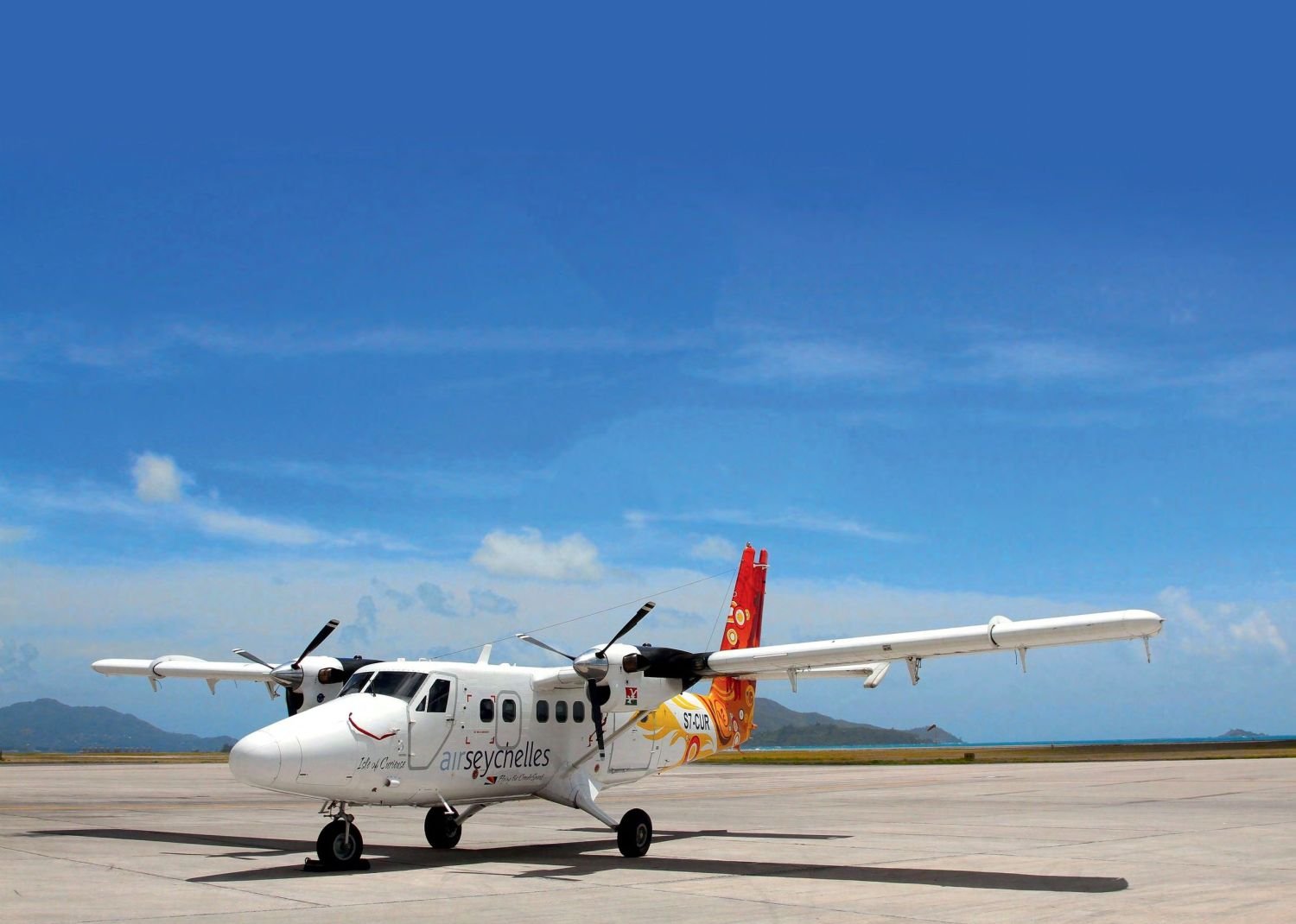 The six Twin Otters fly a dense network of services around the Seychelles, with almost 217,000 passengers carried on them last year.
Air Seychelles

The Seychelles republic is a paradise in the Indian Ocean, consisting of 115 far-flung islands and islets, whose total land mass is about double that of the US city of Boston. Only a few of the islands are inhabited at all and cater for tourists. But they come in droves – the 93,000 Seychellois, as locals call themselves, accommodated a record number of 303,000 visitors in 2016. The majority of the visitors came from France and Germany. UK nationals accounted for 6% of visitors, or 18,885 people, in 2016. Increasing the number of European visitors is the task of Roy Kinnear, the Irishman who has been Chief Executive Officer of Air Seychelles since 2015.

The summer schedule of 2017 will see one of the smallest intercontinental carriers in the world executing a big expansion, introducing new flights to Düsseldorf, Germany and Durban, South Africa. The new long-haul route to Europe is a big leap, as the sole European route Air Seychelles has operated in recent years has been to Paris CDG with the only Airbus A330-200 it had in its fleet. Now, a second A330-200 has joined the operation. Back in 2011, Air Seychelles axed all its European routes after suffering prolonged losses. This was a drastic step – the island airline had started its own long haul routes back in 1983 with two second-hand former Varig Boeing 707s. It also operated to London Gatwick and served half a dozen destinations in Europe at times.

Tourism is the most important source of income to the Seychelles, besides exporting fresh tuna. Reflecting the booming tourist trade, many airlines currently serve the international airport on the main island of Mahé. Emirates alone lands twice daily from Dubai with Boeing 777-300ER jets, while Etihad Airways and Qatar Airways send smaller A319/A320s. Qatar had withdrawn its services for three years before resuming them, also Sri Lankan, Turkish Airlines and Ethiopian Airlines serve the Seychelles, while Austrian Airlines will commence flying from Vienna in September.

But former Minister of Tourism Alain St Ange is well aware that the island’s tourism trade can’t always depend on foreign carriers. He said: “Our own airline is the backup that we need. We’ve been welcoming extra companies, but we also need the insurance to know that if there was ever a downward trend, we are able to hold ourselves [and] our way forward.” 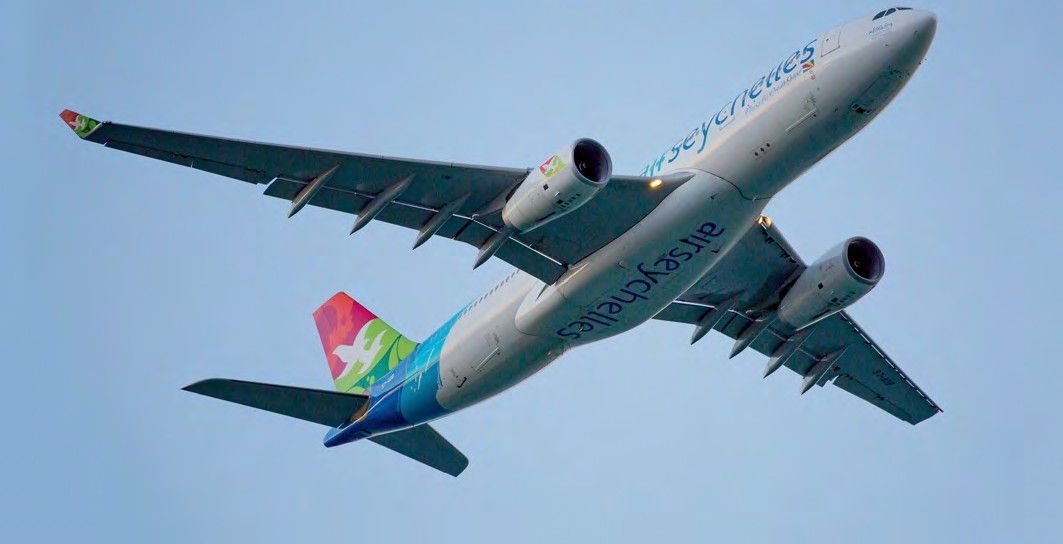 Air Seychelles is returning to Europe this summer with its A330s, reflecting a growing tourist trade.
Air Seychelles 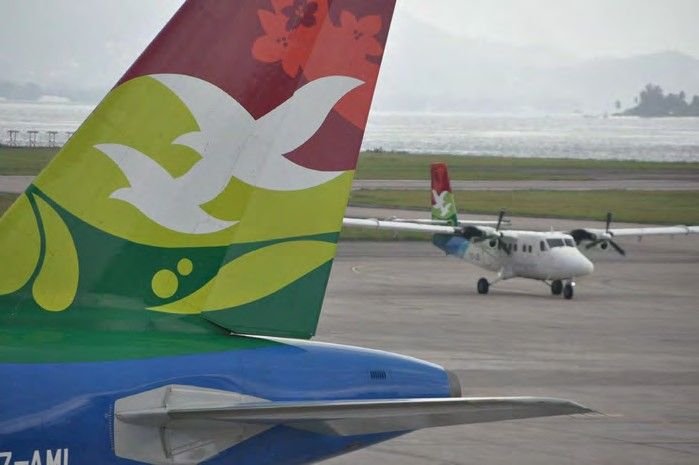 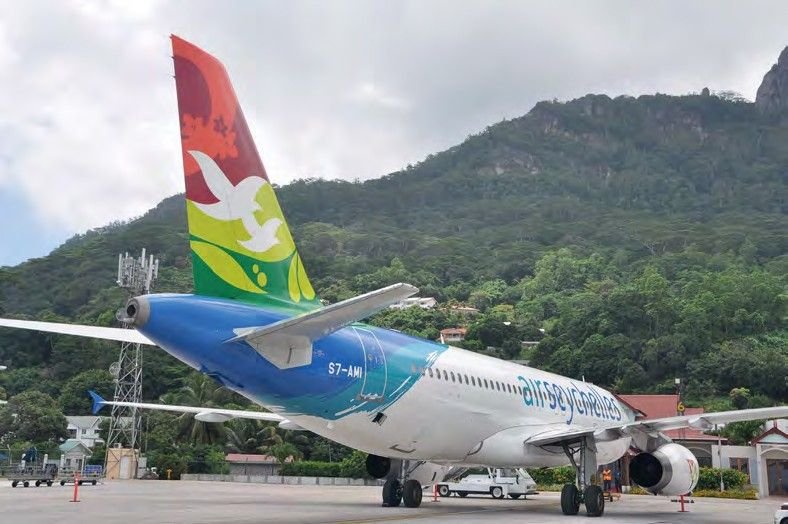 As recently as 2012, the island airline was on the brink, but then the Seychelles Government succeeded in convincing Etihad to buy 40% of the airline’s shares for $45 million. The synergies of the partnership, as well as expertise, capital and aircraft from Abu Dhabi saved the airline. Since 2012, Air Seychelles claims to be profitable after previously being in the red, even though the International Monetary Fund had doubts about the airline’s profits. The Seychelles Government holds 60% of the carrier and Etihad 40%, with the Gulf airline injecting further capital to cover operational losses.

Since Etihad took over, Air Seychelles has had three CEOs. The former boss Cramer Ball went on to lead one of the most troubled Etihad partner airlines, Alitalia. Now financial expert Roy Kinnear is expected to bring and keep Air Seychelles on course.

“Air Seychelles is very complex, ” said Kinnear in talking to AIR International in Mahé. That sounds paradoxical for an airline operating just four jets (two A320s and two A330s) plus six Viking Air DHC-6 Series 400 Twin Otters for island services. But he is right, because where else in the world does the portfolio of such a small airline comprise everything from ten-minute island hops to ten-hour long-haul missions and routes to destinations on three continents?

The objective for 2017 is to become independent of government and Etihad funding in running the airline. Kinnear stated: “Air Seychelles today is a self-sufficient, sustainably profitable airline with a structured development plan which allows us to grow both internationally and domestically. There are three parts to our business: long-haul, mostly for tourism, regional flights on routes like to Abu Dhabi, Mumbai, Johannesburg and now to Durban, and domestic traffic.”

Efficiency at Air Seychelles has improved significantly since Etihad took over, with staff numbers initially reduced from 750 to 550. Working hours of cabin crew have been increased from 45 to 50 hours a month before to about 80 hours, and daily aircraft use from single digit figures to over ten hours now. Recently, with the doubling of long-haul capacity, Air Seychelles hired 55 additional cabin crewmembers. All flight attendants are locals and they are now being trained by Etihad in Abu Dhabi. With the total staff count now at 787, Air Seychelles is the nation’s largest employer. A total of 92 employees are pilots – twothirds of whom are Seychellois – and overall 99% of staff are nationals. 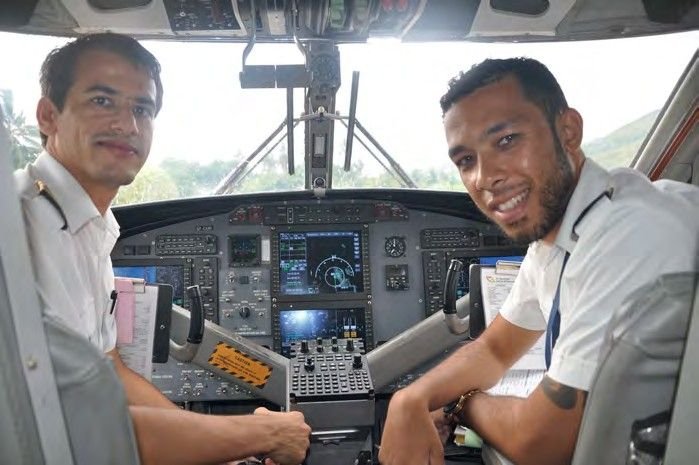 After Etihad’s takeover, Air Seychelles operated two A330s between 2013 and 2015 but, Kinnear says, “that was too much capacity”. After two years operating just one widebody, now a second has come from Abu Dhabi, again for the Düsseldorf route. Both A330s are former Jet Airways aircraft, the Indian airline also being an Etihad partner. Both aircraft boast 18 seats in business class, which don’t offer private compartments as Etihad does, but instead have a seat pitch of 82in (2,082mm) and a full-flat bed of almost the same length.

Kinnear puts a lot of expectation on the Düsseldorf route. “Mostly because Etihad partner Air Berlin is feeding traffic to us from 16 cities, ” said the CEO. He also expects it to be a good cargo airport; Air Seychelles exports about 600,000kg (1.3 million lb) of fish from the islands annually.

While Düsseldorf is mostly seen as a route delivering tourists to the Seychelles, the other new destination, Durban in South Africa, is aimed mainly at transfer passengers. Air Seychelles dreams of establishing a true Indian Ocean hub. The current terminal is clearly not sufficient to establish a bigger hub operation, but there are some lofty plans for a new terminal with financing and designs from Abu Dhabi, although no concrete plan of action exists at this time.

Still, there is already significant transfer traffic through Mahé. “The biggest traffic flow that connects here is between Mauritius and Mumbai, ” according to Kinnear. From Durban, with its high ethnic Indian population, he expects many transfer passengers to the Indian subcontinent.

The second A330 is also serving Mauritius and Mumbai, replacing A320s on some flights and enabling an increase in Paris frequencies from three to four times weekly. Another important regional destination for Air Seychelles is Antananarivo, the capital of Madagascar. This is a watershed year in terms of capacity for Air Seychelles, illustrated by the fact that after seeing an increase in available seat kilometres (ASKs) of 16% in 2016, this year brings a leap of 38%, an impressive achievement for a small airline.

While Kinnear talks about a “structured approach to Europe”, he has already closed the chapter on Asia. In February 2016, big celebrations marked Air Seychelles’ first fiight to Beijing, but the route ended early this year. “This was a one-year contract with a Chinese tour operator at his risk, ” explained the CEO. Apparently, the bookings didn’t reach the expected numbers at a time of an economic downturn in China. “At this point, regular services to Asia is not something I want for Air Seychelles, ” said Kinnear. “Asia is not on our radar.”

He would rather funnel travellers to and from Asia through Etihad’s network in Abu Dhabi. “Turkish, Qatar and Emirates serve different markets, that’s not our core business, ” stated Kinnear. “As long as Paris works for us, we are not exposed as much to direct competition.” 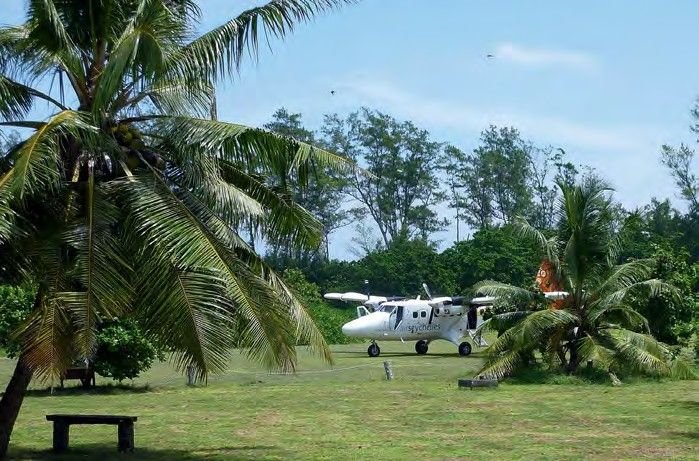 What’s truly impressive about Air Seychelles is its inter-island services, which carried almost 217,000 passengers in 2016 alone on about 300 fiights per week. The key milk run is the ten-minute hop from Mahé to neighbouring Praslin. With the high-volume Emirates fiights, the Twin Otters are flying tourists over the water every few minutes. All six of these 19-seaters at Air Seychelles are the newest DHC-6 Series 400 model built by Viking in Canada; the airline’s entire former DHC-6-300 fleet, with some aircraft over 40 years old, was replaced by new ones from 2012 onwards. The last old Twin Otter left Mahé on a ferry fiight to California in late February 2017. The fiight needed one week and nine stopovers to reach its destination halfway around the globe. “Just replacing old aircraft with new enables us to increase seat capacity by 16%, as the Viking aircraft need less down time for maintenance, and the Twin Otters are incredibly reliable, ” Kinnear enthused.

They need to be, as there is an average of 25 fiights daily in each direction between Mahé and Praslin, rising to 40 fiights at peak times. There are also scheduled services to Bird Island; other islands are only served as charters catering for the lodges there.

It is unclear how the Air Seychelles story will go. There is to be a new chief at Etihad this year, and not all of the very proud Seychellois appreciate the input from Abu Dhabi. At least Roy Kinnear can post a profit for 2016, for the fifth consecutive year, “and in another five years’ time we want to be bigger than with four jets today – but first we have to successfully introduce the second A330.” 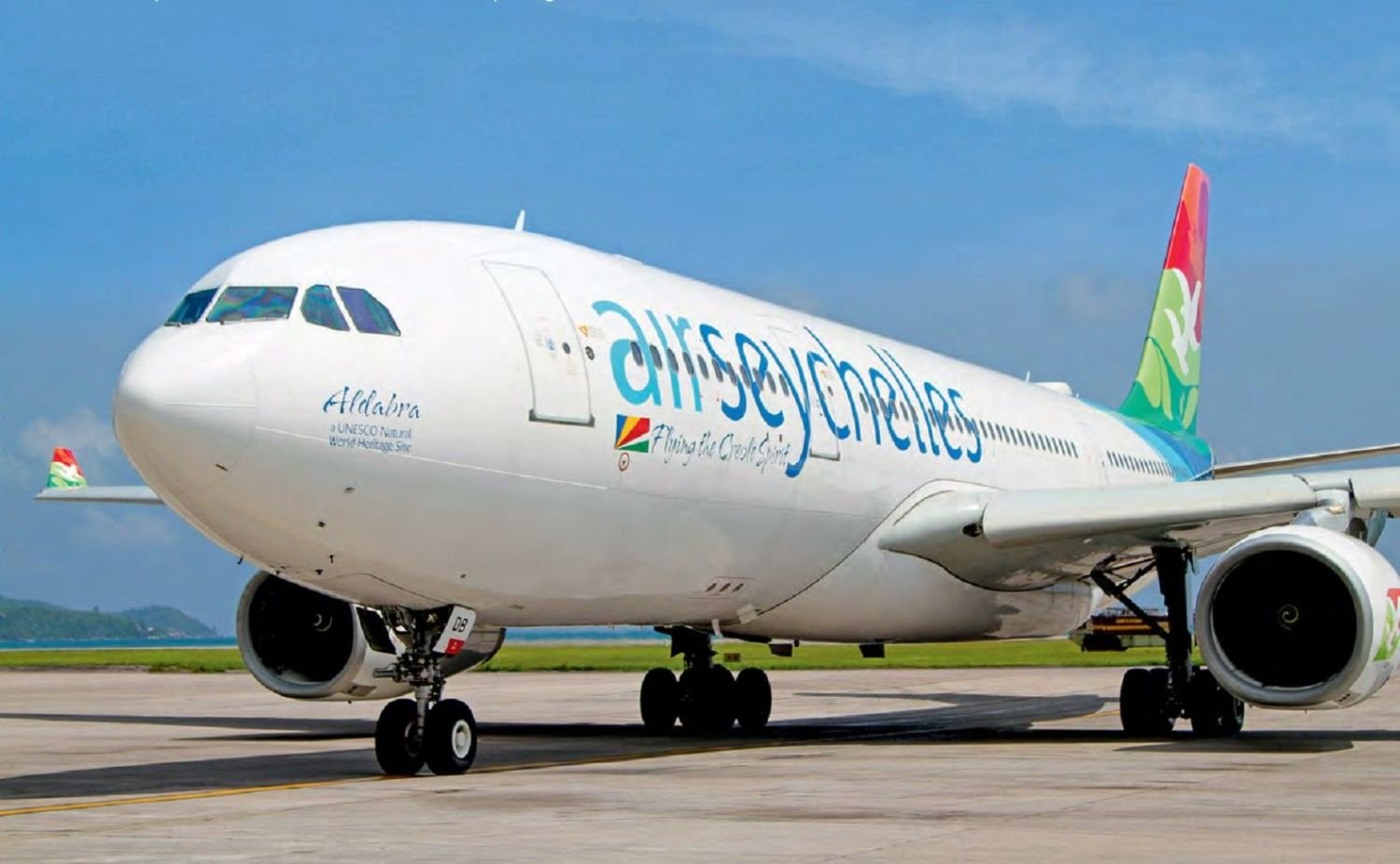