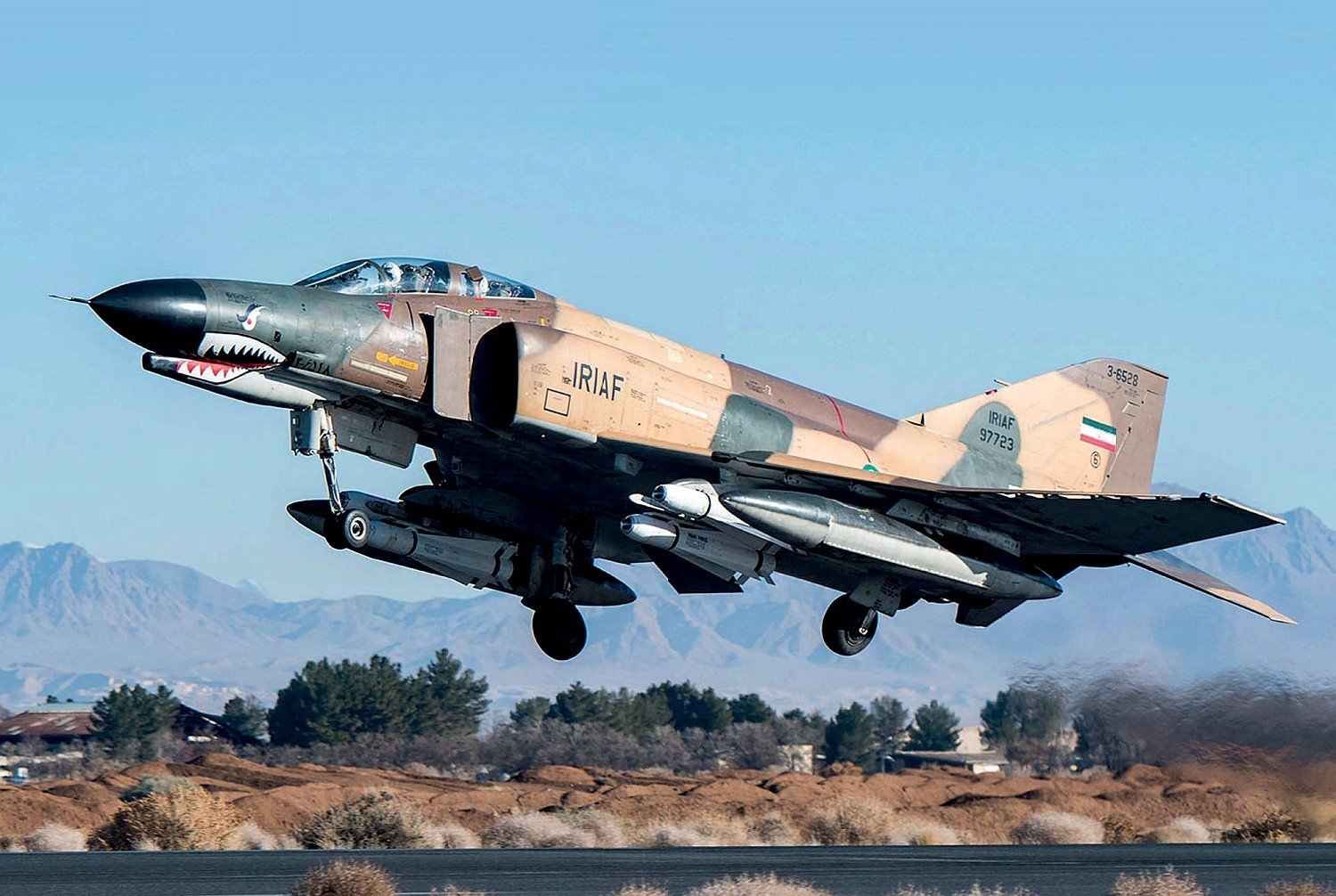 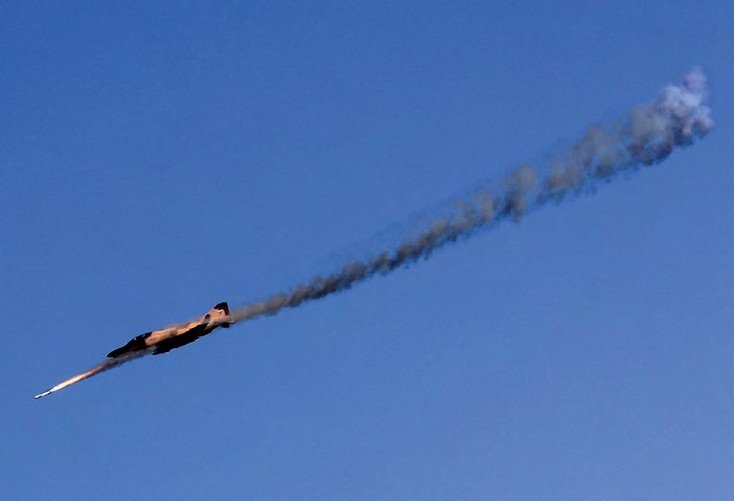 Smoke plumes from an AGM-65A Maverick missile fired from a F-4E Phantom over the Anarak range.
Kayvan Tavakkoli

Iran’s annual air exercise was held for the fourth consecutive year at Isfahan in early January with 46 aircraft participating; 36 of which were fighter jets from eight tactical fighter bases. Staged at the Anarak electronic warfare gunnery range, participating aircrews practised air-to-air and air-to-ground operations in an environment soaked by jamming provided by standoff jammers carried by dedicated aircraft.

New weapons and equipment including upgraded electronic countermeasure pods, locally developed and manufactured precision-guided bombs were tested in the final operational phase; preceded by the deployment and training phases.

Unlike previous years, almost one third of the participating fighter jets operated from their home stations while playing roles assigned to the Red force. Another tactical change to this year’s event was tasking of Iranian Army Aviation helicopters with search and rescue support instead of Air Force CH-47Cs and Bell 214Cs assigned to the 1st Tactical Transport Base at Tehran.

Aircrew walk to their jets at Isafan Air Base.
Kayvan Tavakkoli 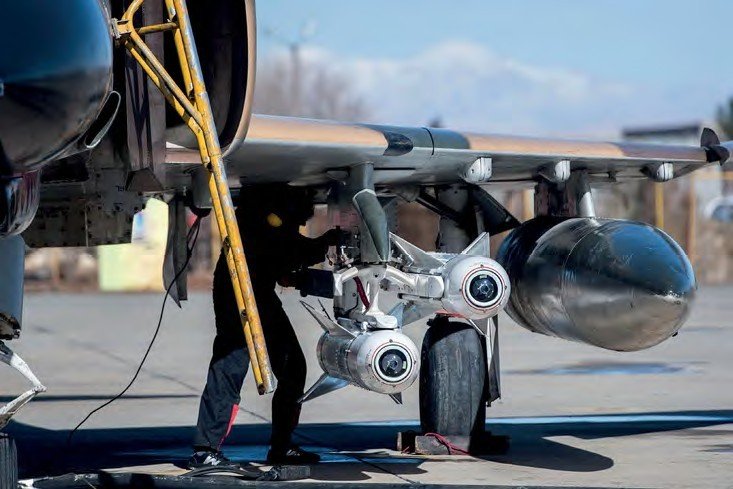 Air operations started with night-time bombing strikes by F-4Es during the evening of January 9. Three units were involved, the 31st, 61st and 91st Tactical Fighter Squadrons, those from the 31st flew directly from Hamedan Air Base.

The next morning, the official first day of the exercise, RF-4E 2-6502 assigned to the 31st Tactical Reconnaissance Squadron departed Isfahan to conduct tactical reconnaissance using a locally-built digital camera and American made wet film cameras to acquire vertical and oblique imagery of targets on the Anarak range.

The aircraft carried a Shahin electronic countermeasures pod; a heavily modernized ALQ-101 designed to jam modern X-band radars. The images acquired by the RF-4E were used to analyse targets for subsequent airstrikes flown later that morning. In addition to the RF-4E, Mohajer 4 and Ababil 3B unmanned air vehicles were used throughout the two days for reconnaissance and battle damage assessment.

First to strike were two FT-7Ns which dropped four locally-built Y-ER-300kg GLONASS/GPS-guided bombs, a munition planned to be used by modernized F-4Es, and F-5E and F-5Fs upgraded under Project Kowsar. That night eight F-4Es each released two Mk82 bombs at Anarak. Two additional F-4Es, each loaded with a Shahin pod, escorted the four Phantoms assigned to the Red force, while those assigned to the Blue force were escorted by two F-14A Tomcats.

A busy flight line at Isafan Air Base with F-5s, MiG-29s and F-4E Phantoms being prepared for flight.
Majid Eslamdoust 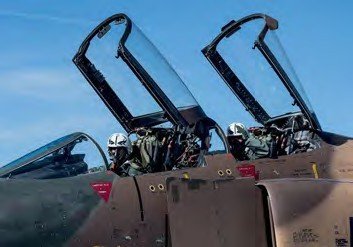 Aircrew wave to the AIR International photographer at Isafan Air Base. Note how this F-4E Phantom is still adorned with English stencilled markings applied by McDonnell Douglas in the 1970s.
Kayvan Tavakkoli

The day’s Red force comprised two MiG- 29UBs, two 72nd TFS Su-24MKs and six 31st TFS F-4Es; two Kh-25MLs, one AGM-65 Maverick and 12 Iranian-made Mk82 were used against the targets. The Red force was protected by two MiG-29UBs one of which carried a pair of R-73E infrared-guided air-toair missiles.

Electronic countermeasures protection of the Blue force was provided by a Falcon 50EX nicknamed Saye is one of three stand-off jammer aircraft in the IRIAF.

One other event on day two involved a C-130H air dropping weapons to an imaginary Blue ground force on the range before the exercise concluded.

A surge in the budget allocated to the Islamic Revolutionary Guard Corps, and the subsequent decline of the budget awarded to the Iranian Air Force has negatively affected its combat readiness over the past two years. While spare parts for American-built F-4s, F-5s and F-14s can, for the most part, be produced domestically in Iran or in China.

Spare parts for Russian-built MiG-29s and Su-24s are hard to find, a situation that has resulted in just five Su-24s and 11 MiG-29s that are currently airworthy. Consequently, during this year’s exercise, the Air Force was unable to forward deploy three Su-24MKs to Isfahan and just two Fencers operated directly from Shiraz Air Base.

In general, the Air Force is struggling to protect Iran with its remaining, ailing fleet under such harsh budgetary and logistics’ conditions. Tactical Fighter Bases now overhaul almost two thirds of their fighter jets instead of sending them to Iranian Aircraft Industries as a way to save budget. This has kept the fleet of American-built fighter jets in a stable, airworthy condition.