IRGCAF Su-22UM3, serial number 15-2462, performing a manoeuvre on the third day of the show.
Sergey M 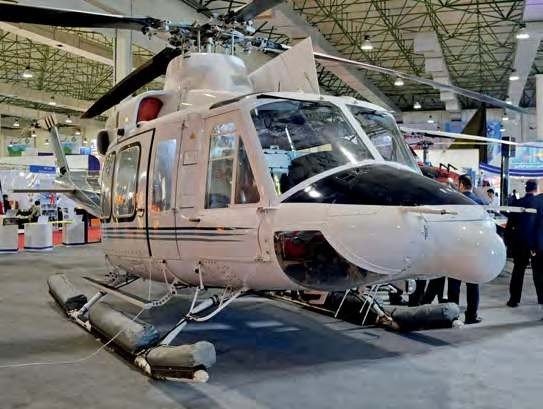 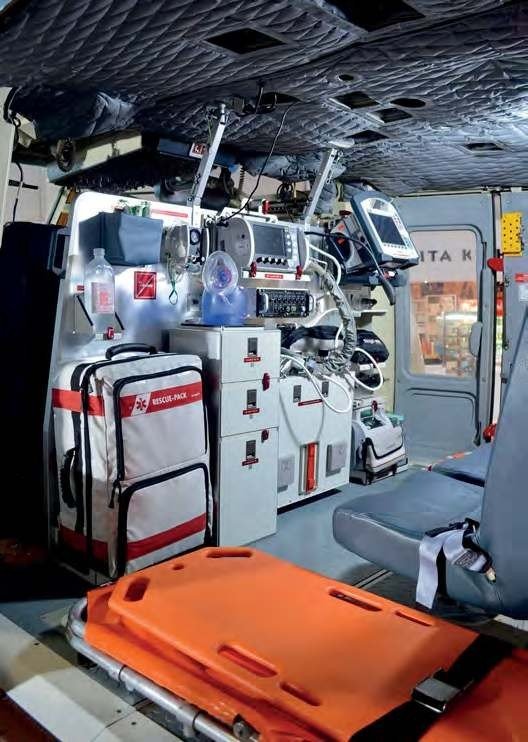 Upgraded IRGCNA Bell 412EP, serial number SN-2201, was officially handed over to the service on the first day of the show, fitted with medical equipment for the medevac and air ambulance role.
Manuch Manteghi

THE INTERNATIONAL airport on the island of Kish in the Persian Gulf was venue to Iran’s latest air show between November 26-29. Drawing 19 participants from the Islamic Republic of Iran Air Force (IRIAF) and seven from the Islamic Revolutionary Guard Corps Air Force (IRGCAF) some of which were involved in flying displays. Elsewhere at the event the Iranian Aviation Industries Organization unveiled new products, new capabilities, and delivered a Bell 412EP and a Shahed 278 light utility helicopter to the Islamic Revolutionary Guard Corps Navy Aviation. 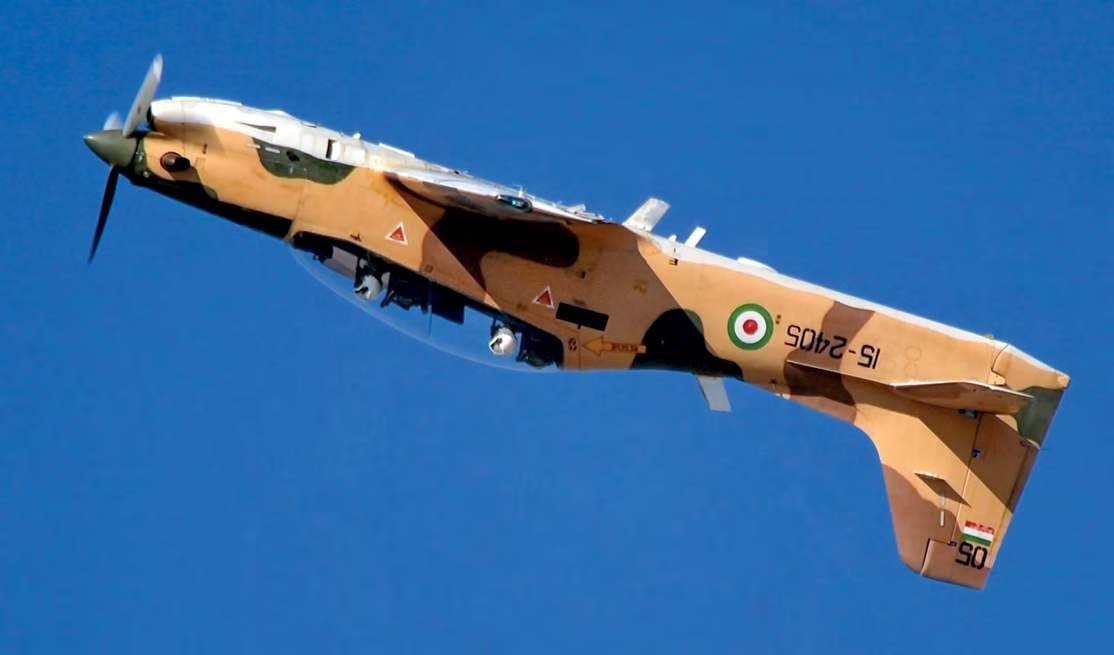 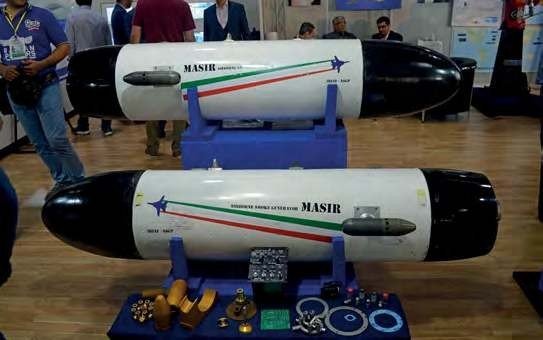 To help realise the programmes, the IRIAF’s Deputy of Industrial Research and Self-Suiciency has designed and produced smoke generators to be installed on F-5E Saeghe centreline pylons, and the pylons carried on station 1A and station 8A of F-14 Tomcats. Examples of the smoke generators involved were on display in the main exhibition hall.

Before Iran’s Islamic Revolution in 1979, the Imperial Iranian Air Force operated an aerobatic demonstration team named the ‘Golden Crown’ equipped with eight F-5Es assigned to the 2nd Tactical Fighter Base. The team was one of the best from Asia but was disbanded by order of the Grand Ayatollah Ruhollah Khomeini who believed the team represented the Pahlavi dynasty; the ruling house of the imperial state of Iran.

After the death of Khomeini, the IRIAF’s Commander-in-Chief Brigadier General Mansour Sattari ordered the reforming of two teams, one using PC-7s and one using F-5As. However, the plan was cancelled after a PC-7 crashed into the Gavkhuni Wetland near Isfahan in 1991, killing its pilot who was practising aerobatic manoeuvres.

According to the IRIAF’s latest plan, the experience of surviving members of the Golden Crown team will be used to create training publications for use by new display pilots on three types of aircraft; the PC-7, the F-5E Saeghe and the F-14A Tomcat. The PC-7 will be used for a solo display, the F-5E Saeghe for a formation display with five to six aircraft, and the F-14A with two aircraft.

The highlight of this year’s Kish air show was a flypast of the world’s sole operational KC-747 tanker escorted by three F-4E Phantoms and two F-14A Tomcats on the last two days of the show.
Sergey M

The two single-seat Saeghes were both used to perform aerobatic displays during the show. One of two PC-7s, serial numbers 7-9912 and 7-9913, assigned to the 82nd Undergraduate Pilot Training Squadron also performed aerobatic displays at the show; the aircraft deployed from Isfahan.

Kish air show was not all about aerobatic teams and solo displays; before those displays, the IRIAF provided formation flybys featuring Boeing 707-3J9C tanker (KC-707, serial number 5-8304) escorted by three 91st TFS F-4E Phantom IIs and two 81st TFS F-14A Tomcats, After the formation flypast, the fighter aircraft separated from the tanker only to return in two formation flights before returning to the 9th Tactical Fighter Base at Bandar Abbas International; their operating location. Change to the formation flypast was made on the final two days of the show when the KC-707 was swapped for the IRIAF’s sole operational Boeing 747-131F tanker; KC-747, serial number 5-8103.

The Iranian Helicopter Support and Renewal Company (IHSRC) displayed Bell 412EP, serial number SN-2201, with a heavily modified cabin for medical evacuation and air ambulance roles to provide emergency medical service for Islamic Revolutionary Guard Corps Navy Aviation units and civilians operating from the service’s heliport on Kish Island. The Bell 412EP was unveiled at a ceremony attended by Iranian Minister of Defence, Brigadier General Amir Hatami on November 26, and is the first of five ordered by the IRGCNA.

Elsewhere, the Iranian Electronics Industries company from Shiraz displayed its modernised APQ-120 radar used by the IRIAF’s F-4Es. Under the modernisation, radar units receive a new Pulse-Doppler antenna to replace the original antenna, and new more capable electronic boards to replace the older boards, tripling its detection range for sea surface targets, and enabling the aircraft to track large ships within 200km; a significant increase over the original 60km detection range. At least five IRIAF F-4Es have received the modernised radar; more will follow as part of the second phase of Project Dowran underway with the Iranian Aircraft Industries Company in Tehran. 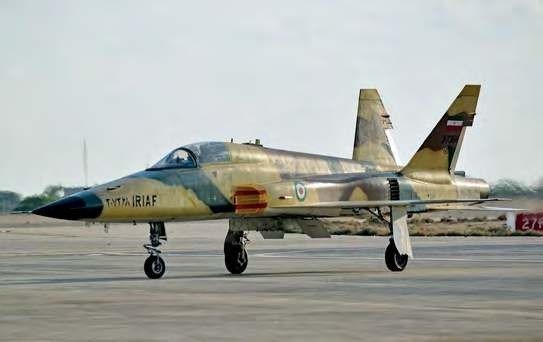 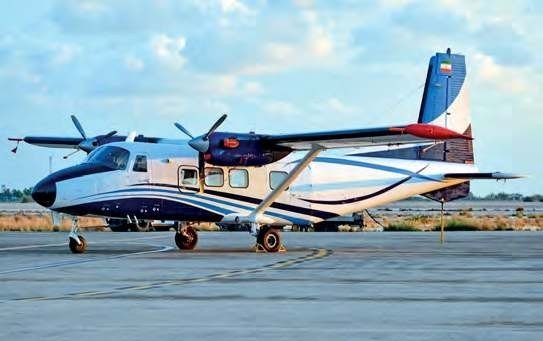 Two of the most important products displayed by the Iranian Aircraft Manufacturing Industries Company were the Mohajer 6 unmanned air vehicle and the Shahed 278 light utility helicopter.

The Mohajer 6 is a military type unmanned air vehicle modified for the civilian market to perform aerial cartography and topography using Danish made Phase One iXU-1000 highresolution cameras.

An Iranian clone of the Bell 206 Jet Ranger but featuring a composite fuselage, the Shahed 278 light utility helicopter on display, was sold to the IRGCNA at the end of the show to be used beside its two other Shahed 278s for pilot training at Bandar Abbas.

Both the IRIAF and the IRGCAF had a stronger presence at this year’s show compared to two years ago with fewer civilian operated aircraft and helicopters on display, showing perhaps, that the organizers have realized that visitors are more interested to see military aircraft rather than civilian ones.

Kish 2018 provided an opportunity for Iranian defence companies to find new middlemen and contractors to help them circumnavigate sanctions and win new customers to sell products for civilian markets such as the Mohajer 6 for aerial cartography. 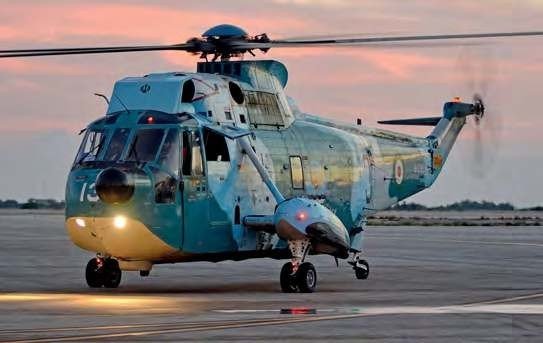 Reported to be the first ASH-3D Sea King in service with the Iranian Navy Aviation with an upgraded avionic system for night time operations.
Sergey M 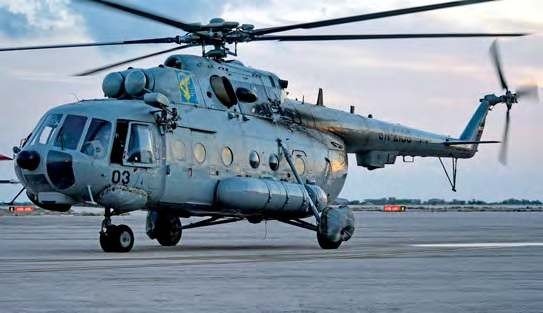 Mi-171, serial number SN-2103, is equipped with a night time compatible avionic system fitted by the IHSRC and remains the only Hip of the five in service with the IRGCNA in dark grey camouflage.
Sergey M 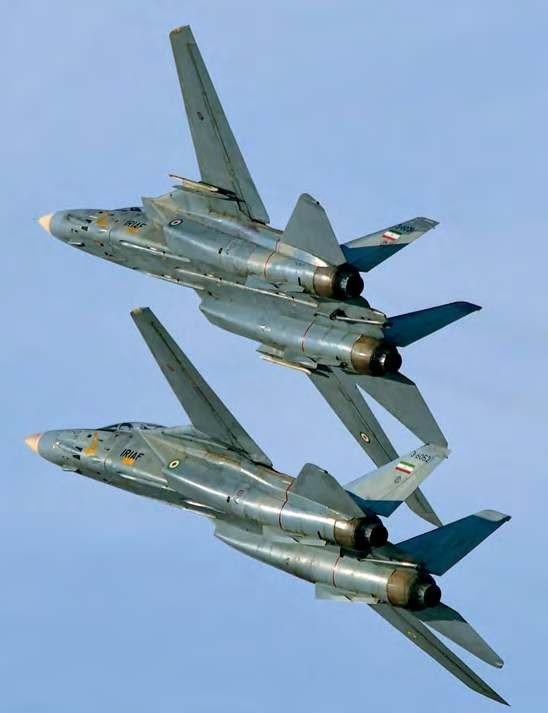