On 18 July former Iraqi Air Force Hawker Fury OO-ISS, c/n 37729, made its first postrestoration flight at Antwerp- Deurne airport in the hands of owner Kris van den Bergh. Later that day the Langley, Berkshire-built fighter was flown from Antwerp to its new base at Brustem/Sint-Truiden, where it will share a hangar with van den Bergh’s Supermarine Spitfire XVI, SL721/OO-XVI, and a North American T-28B Trojan. 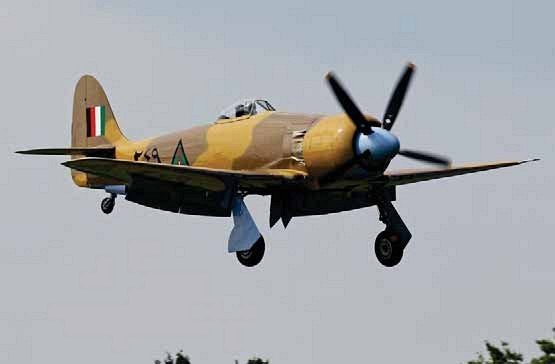 Kris van den Bergh brings his ex-Iraqi Air Force Fury ISS, serial 249, in to land at the end of its first flight at Antwerp-Deurne airport on 18 July
JAN MANGELSCHOTS

Originally delivered to the Iraqi Air Force as a Fury ISS — Iraqi single-seater — in September 1949, it was operated with the code 249. After retirement from service and several years in storage it was one of around two dozen Fury/ Sea Fury airframes acquired in 1979 by David Tallichet and Ed Jurist. Registered N54SF, it was initially put into storage in Orlando, Florida, until being sold to Australian Rob Poynton in 1985, restoration getting under way at his farm in Toodyay, Western Australia. In 1992 it was moved to Jandakot, Perth, where two years later Panama Jack’s Vintage Aircraft Co began work on the machine, resulting in a completed fuselage by 2002. In February 2011 the still unflown 37729 arrived at Antwerp shortly after being acquired by van den Bergh, the restoration being taken up by Flying Aces Services and Training (Fast Aero) at Deurne under the leadership of Frédéric Vormezeele. The Bristol Centaurus engine was shipped to the USA for a rebuild.