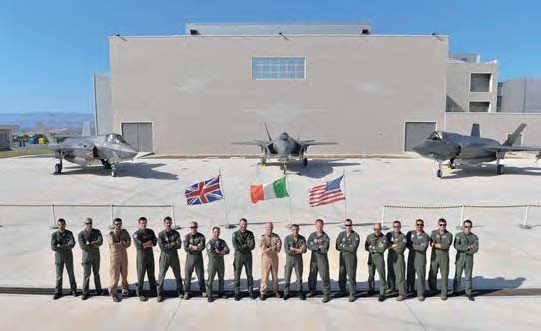 American, British and Italian airmen stand in front of their aircraft at Amendola Air Base, Italy on July 2, 2019.
Aeronautica Militare/Troupe Azzurra

As Italy continues to integrate its F-35A Lightning IIs into the NATO framework, two joint exercises took place at Amendola Air Base on July 2, 2019.

In the morning two Aeronautica Militare F-35As from 13° Gruppo and two UK F-35Bs belonging to 617 Squadron, but deployed to RAF Akrotiri, Cyprus, flew sorties together.

Later in the day four Italian F-35As, and four US Air Force F-35As from the United States Air Force’s 421st Expeditionary Fighter Squadron flew a sortie together working with Italian Eurofighter F-2000 Typhoons, AMXs, T-346s and a KC-767A. The 421st is currently deployed to Spangdahlem Air Base, Germany as part of a Theater Security Package.

The aim of the two exercises was to share training and operational experiences and to practise interacting with other AMI aircraft.

Major De Guida, commanding officer of 13° Gruppo said what appeared to be a complex series of exercises was performed with “great simplicity” thanks to the exceptional capabilities of the F-35.