Personnel from the 185° Reggimento Artiglieria Paracadutisti undertaking a FRIES training mission in Tuscany from a 3° REOS HH-412.
All photos Riccardo Niccoli unless stated 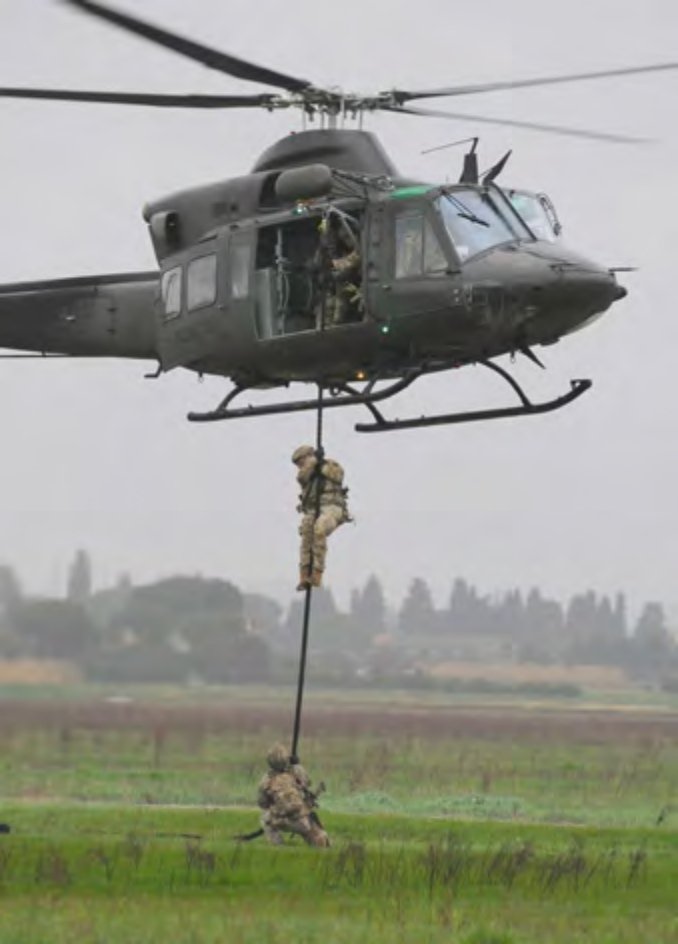 The second Aviazone dell’Esercito ICH-47F MM.81779/E.I.702 over Lake Maggiore, northern Italy, before delivery. Clearly visible are the three chaff and flare dispensers on the rear part of port side, part of the SIAP self-defence suite.

In 2014, the Aviazione dell’Esercito (AVES, or Italian Army Aviation) made an important step in its ability to operate at high level in national and international environments in the special forces field. On November 10 that year, at Viterbo it activated the 3° Reggimento Elicotteri per Operazioni Speciali (REOS, or Special Operations Helicopter Regiment), known as ‘Aldebaran’.

The official ceremony to mark the squadron standing up was held on January 29, 2015, but the origins of this project date back to 2012, when the army realised 26° Gruppo Squadroni (Battalion) ‘Giove’, lacked the necessary capability to be fully included in the Italian special forces community. It was necessary to upgrade the unit to regiment level capable of building up to a task force when necessary, with the ability to operate at least two Special Operations Air Task Units, plus possible Direct Support Task Units and one Combat Service Support Unit, for national (joint) and international forces. The project was assigned by the Army General Staff to Colonel Andrea Di Stasio, who – after having conceived and organised the unit – was logically its first commander.

At present, the Chinooks are not permanently assigned to 3° REOS, because they are being replaced by the new ICH-47F. When fully operational, 3° REOS will operate three squadrons: one ETM with up to six ICH-47Fs, one ESC with eight HH-412s, and another ESC with six UH-90s. Despite earlier plans, the regiment will continue to operate with the HH-412, because it is a valuable and flexible asset. It is light, compared to the heavy Chinook, and it is smaller and more agile than the UH-90A. Above all, the HH-412 is an excellent platform for heli-sniping and it is the only one of the three types that can be deployed with short notice in a C-130J.

The regiment has been able to operate since the very beginning by increasing its capabilities. New personnel were used to build up and strengthen the support and operational components. Now, the regiment is able to conduct first level maintenance activity on all three types and is still growing in size.

The unit’s personnel are volunteers from other AVES units. A first screening phase is carried out by the Army General Staff, the 9º Reggimento d’Assalto Paracadutisti (9th Assault Parachute Regiment), and AVES Command. Those selected are sent on a course for special operations flying that is divided into two phases. The first 21-week phase is called Operatore Basico per Operazioni Speciali (OBOS or basic operator for special operations) and is dedicated to ground activity. The second 21-week phase, dedicated to flight operations, is carried out at different places and units.

By the end of the course, the applicant is a qualified special operations pilot or specialist flight crew. A different syllabus has been developed for the onboard gunners. They attend a 22-week OBOS course, and then a second 24-week course specific to gunners and run by 3° REOS.

By spring 2015, just a few months after its establishment, the regiment was committed to several joint training activities with special operations forces from the Marina Militare (Italian Navy) and Aeronautica Militare (Italian Air Force) in force integration training, arranged by the Comando Interforze per le Operazioni delle Forze Speciali (Joint Special Forces Command). In June 2015, Viterbo was home of an important international exercise, Italian Blade 2015, organised by the European Defence Agency. This saw 3° REOS operate as the core unit in the exercise, which involved a series of tactical exercises based on typical special forces operations. 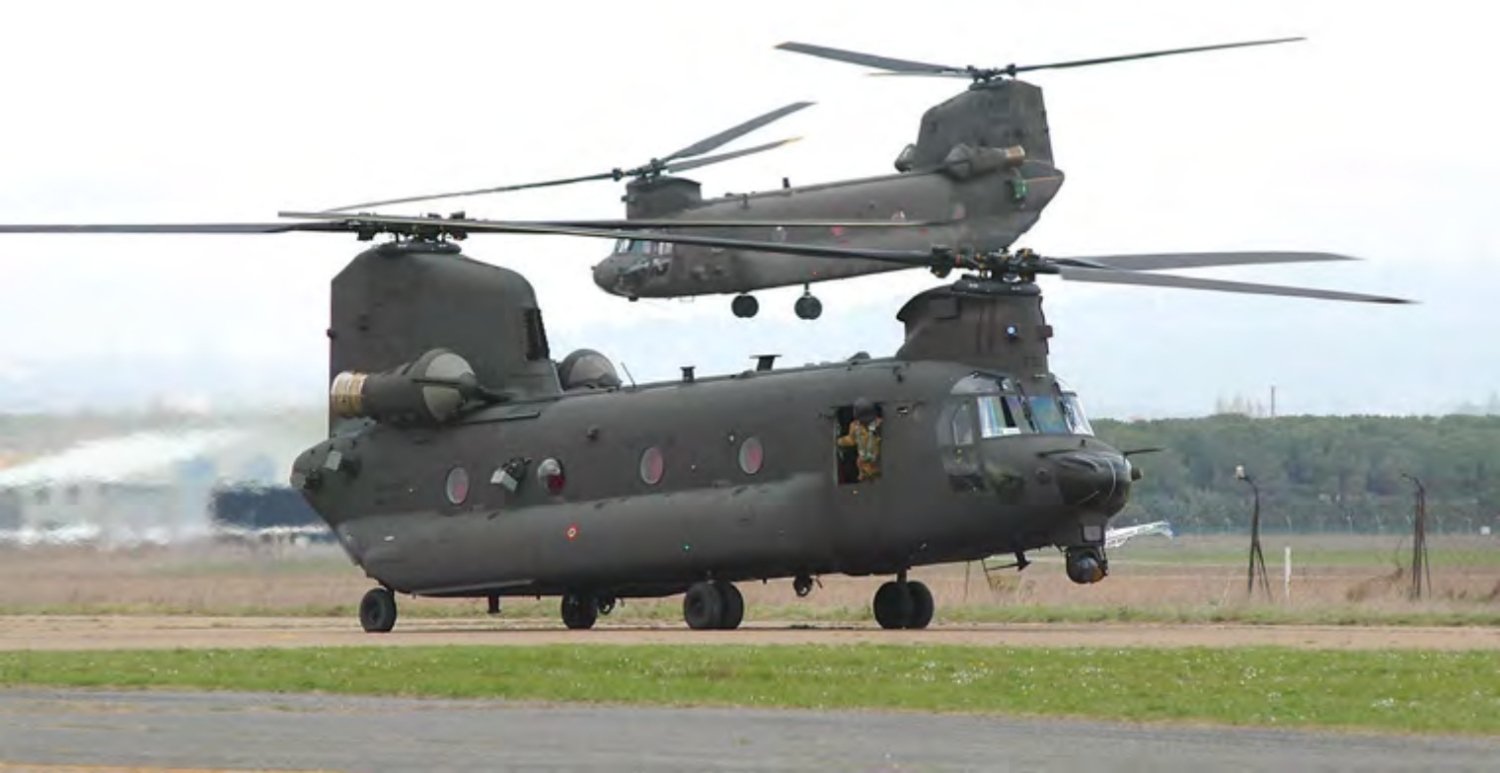 An ICH-47F taxiing at Viterbo, with a CH-47C taking off behind. Clearly visible under the Foxtrot’s nose are the new Selex ES LOAM system, a FLIR sensor, and a high-intensity searchlight.
AgustaWestland via author

Aviazione dell’Esercito has operated the Chinook since 1973, when it started to receive the first of 40 CH-47Cs assembled by Elicotteri Meridionali, a subsidiary of Agusta. The experiences of four decades of operations with the CH-47C were so satisfactory that, when the need for a replacement arose, the AVES decided to replace the old Chinooks with… new Chinooks.

The programme started in July 2008, when AgustaWestland (AW) signed an industrial agreement with Boeing for the licensed production of the CH-47F, which, after modifications requested by the AVES, was designated ICH-47F (I for Improved). The deal allows AW to produce and market the ICH-47F model not only to Italy, but also to other European and Mediterranean countries. AW is responsible for the systems integration, final assembly and delivery, and was qualified to produce the transmission system. Boeing is responsible for fuselage manufacture. The €900 million contract for AVES was signed on May 13, 2009. It covers 16 helicopters (with an option for four more), plus five years of technical support. If resources are available, AVES hopes the four machines will be completed in a special operations configuration featuring enlarged fuel tanks. 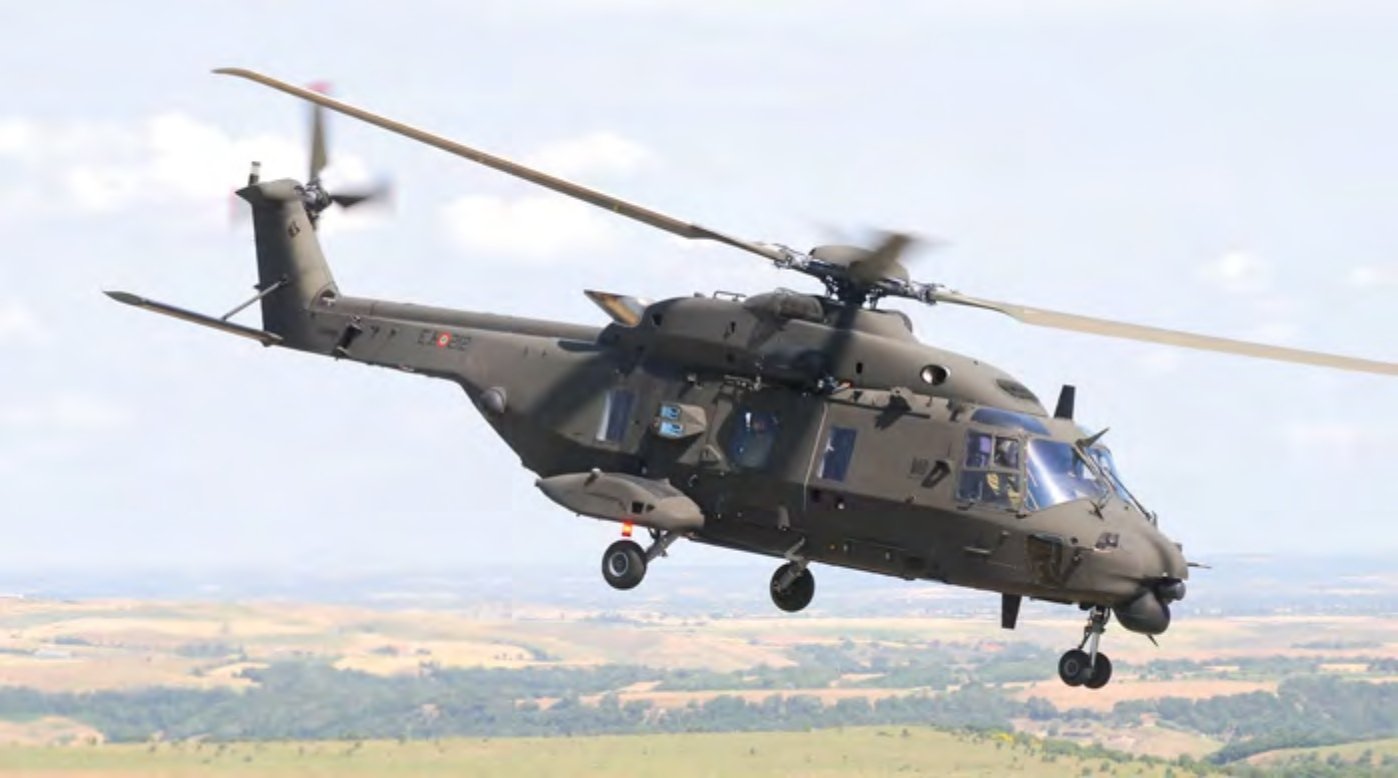 Six UH-90As, one of which is seen on the range at Monte Romano near Viterbo, will be assigned to 3° REOS. 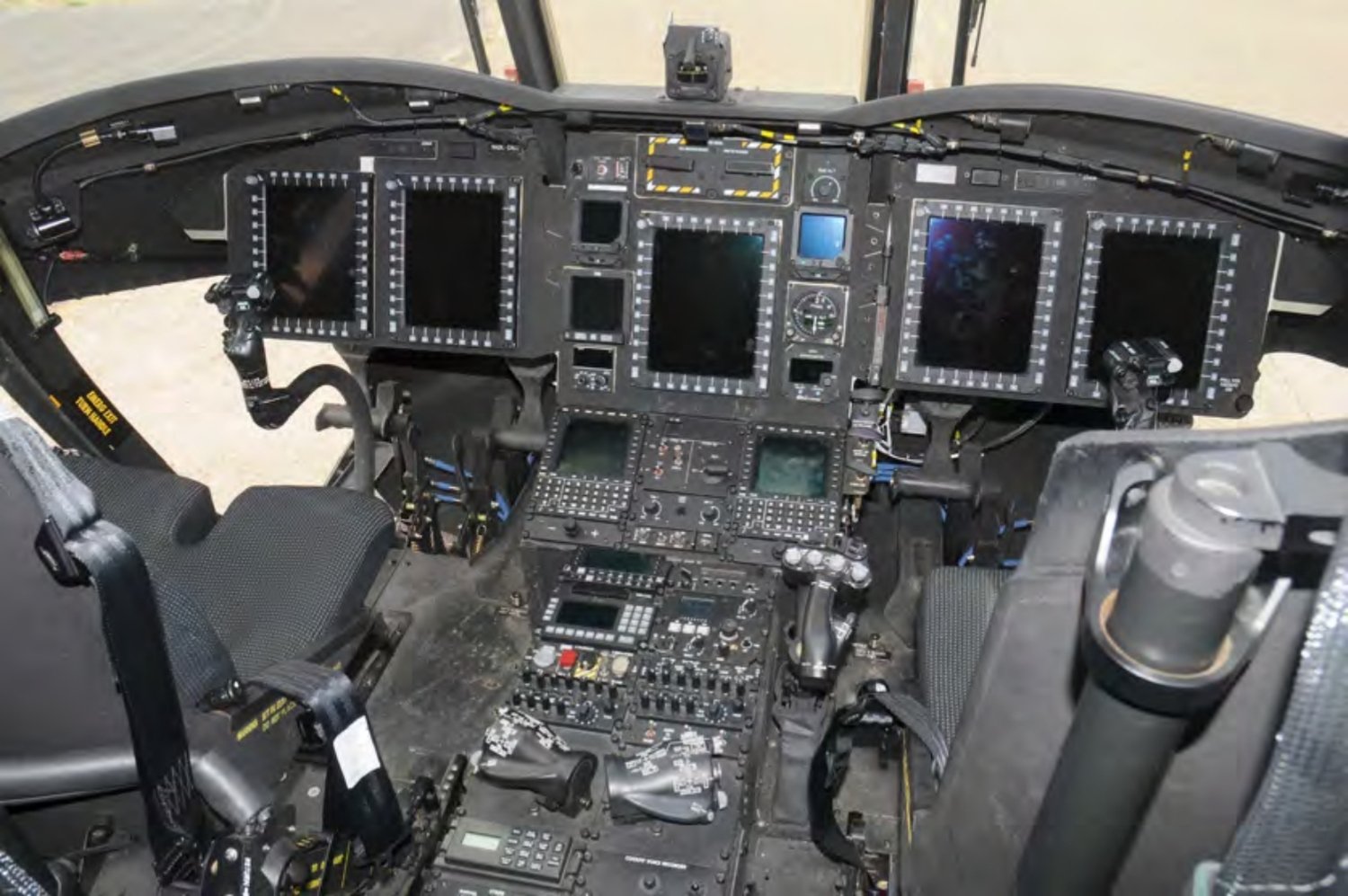 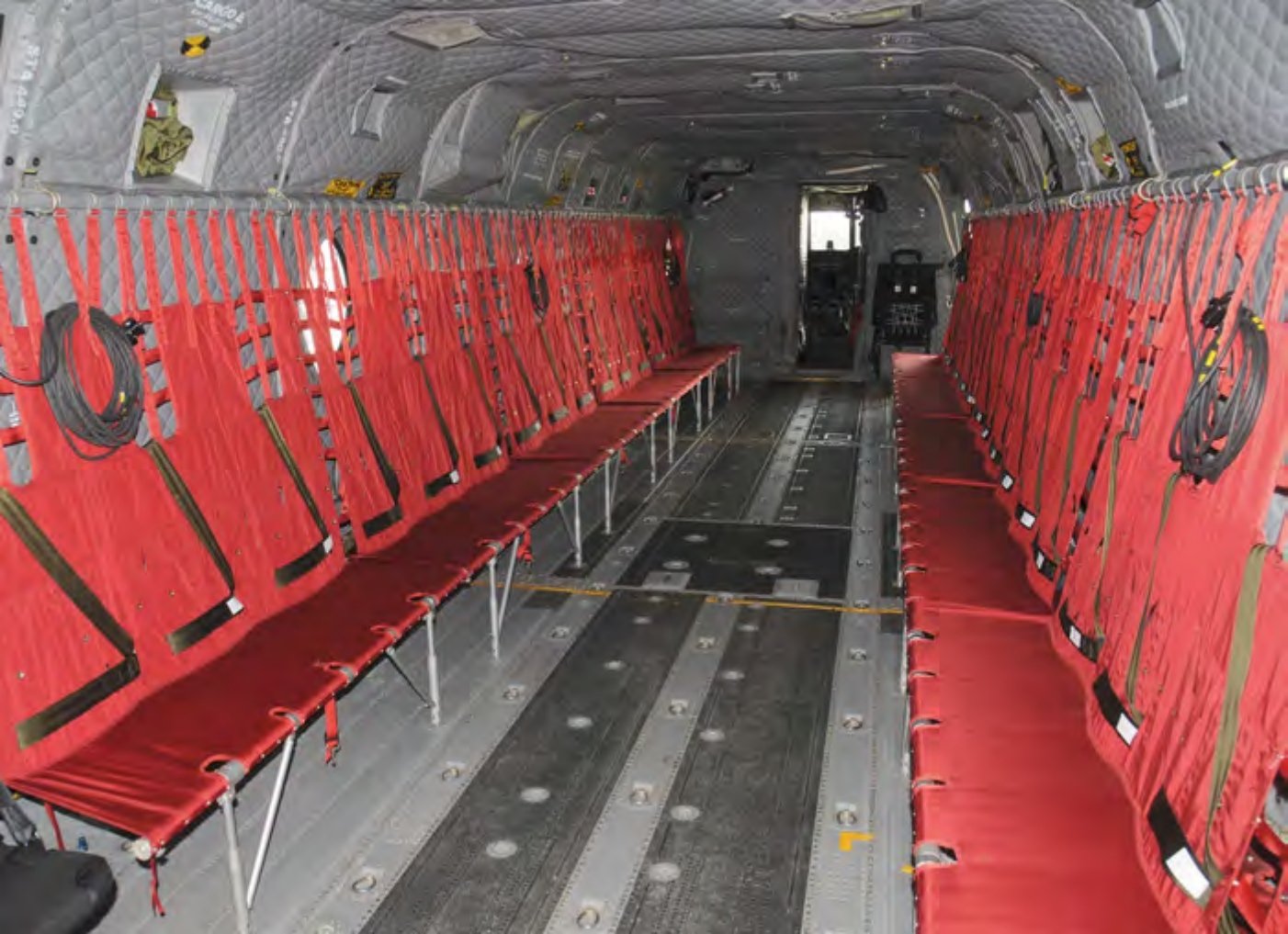 The cargo cabin of the ICH-47F is similar to the older CH-47C, but features simpler hooking systems.

Compared to the old CH-47C, the ICH-47F features numerous new equipment and avionics systems that make it a modern and extremely capable and reliable machine. The autopilot can be programmed on board the helicopter, and with a ground planning station. The glass cockpit is dominated by five large, colour, LCD multifunction displays. For instrument flying rules and all-weather flight, there is a Rockwell Collins Common Avionics Architecture System advanced autopilot, coupled to the BAE Systems Digital Advanced Flight Control System. In addition, there is a Honeywell Primus WR700A weather radar, and a L3 Avionics WX500 Stormscope, for detection of electrical bursts in the air. A MIL-STD-1553 databus, allows the interface of digital systems in the battlefield, and better management of the navigation, communication and datalink data. The ICH-47F fuselage is produced in a single construction piece that is lighter and reduces vibrations and technical inspections compared to the CH-47C.

Besides the standard features of the F-model, the new Italian Chinook is equipped with systems specified by AVES; a new digital intercommunication system formed by HF SRT-170 radios, VHF/UHF SRT-651 radios and an SRT-651/P satcom radio, all assembled in three multiband units, one of them with satcom, secure voice and encrypted capability; a forward-looking infrared (FLIR) system and video recording capability; laser range finder; an emergency egress lighting system; AgustaWestland’s Sistema Integrato di Auto Protezione (SIAP or Integrated Self-defence System) comprising radar, missile and laser warning sensors, plus six chaff and flare dispensers. Self-defence firepower comprises two M134 7.62mm miniguns, for each side door, and a Browning M3M 12.7mm machine gun on the rear ramp. There are five points to attach fast ropes and an external hoist above the right side door.

The ICH-47F is fitted with the Selex ES LOAM (low obstacle avoidance monitoring) system and a high-intensity searchlight under the nose. Avionics include an M425 new-generation identification friend or foe, an ANV/421 multi-mode receiver (that integrates VOR/ILS/MB, DGPS and MLS), a UHF/ VHF DF430 homer, one emergency locator system, an ARS-700G airborne search and rescue system, and a TRD94 transponder.

The first ICH-47F (experimental serial CSX.81778) had its maiden flight on June 24, 2013, from AgustaWestland’s Vergiate facility. Various test and certification activities then followed for about a year. The official delivery ceremony for the aircraft with serial number MM81778/E. I.701, was held at Vergiate on October 2, 2014, in the presence of various civil and military authorities. The second helicopter (MM81779/E.I.702), actually the first to be accepted in service, took-off for the delivery flight to Viterbo.

As with the Charlie models, ICH-47Fs will be operated by just two units, both based at Viterbo: 3° REOS Aldebaran and 1° Reggimento ‘Antares’ (the main operator). Viterbo is also the home of the 4° Reggimento di Sostegno (4th Technical Support Regiment) ‘Scorpione’, the AVES maintenance depot for the Chinook fleet.

Aldebaran will receive at least four ICH- 47Fs in standard configuration, but equipped with a ROVER 5 system, new generation night-vision goggles, and bubble windows to increase the gunners’ visibility. Unlike the CH-47C, the Foxtrot can be loaded with three Robinson ERFS II extended-range fuel tanks that can each carry 800 US gallons (3,028 litres) fitted into the cargo area. This capability, extremely useful for special operations, triples the Chinook’s endurance. With all three tanks installed the 3° REOS ICH-47Fs can reach most areas in North Africa from Viterbo.

By the end of 2014, AgustaWestland had already delivered the first four ICH- 47Fs, although one (E.I.704) remained with the manufacturer to complete a series of certifications. Eight helicopters were available by the end of 2015, enabling Antares to reach initial operational capability. The production rate foresees the deliveries of four helicopters per year, with the last deliveries in 2017. 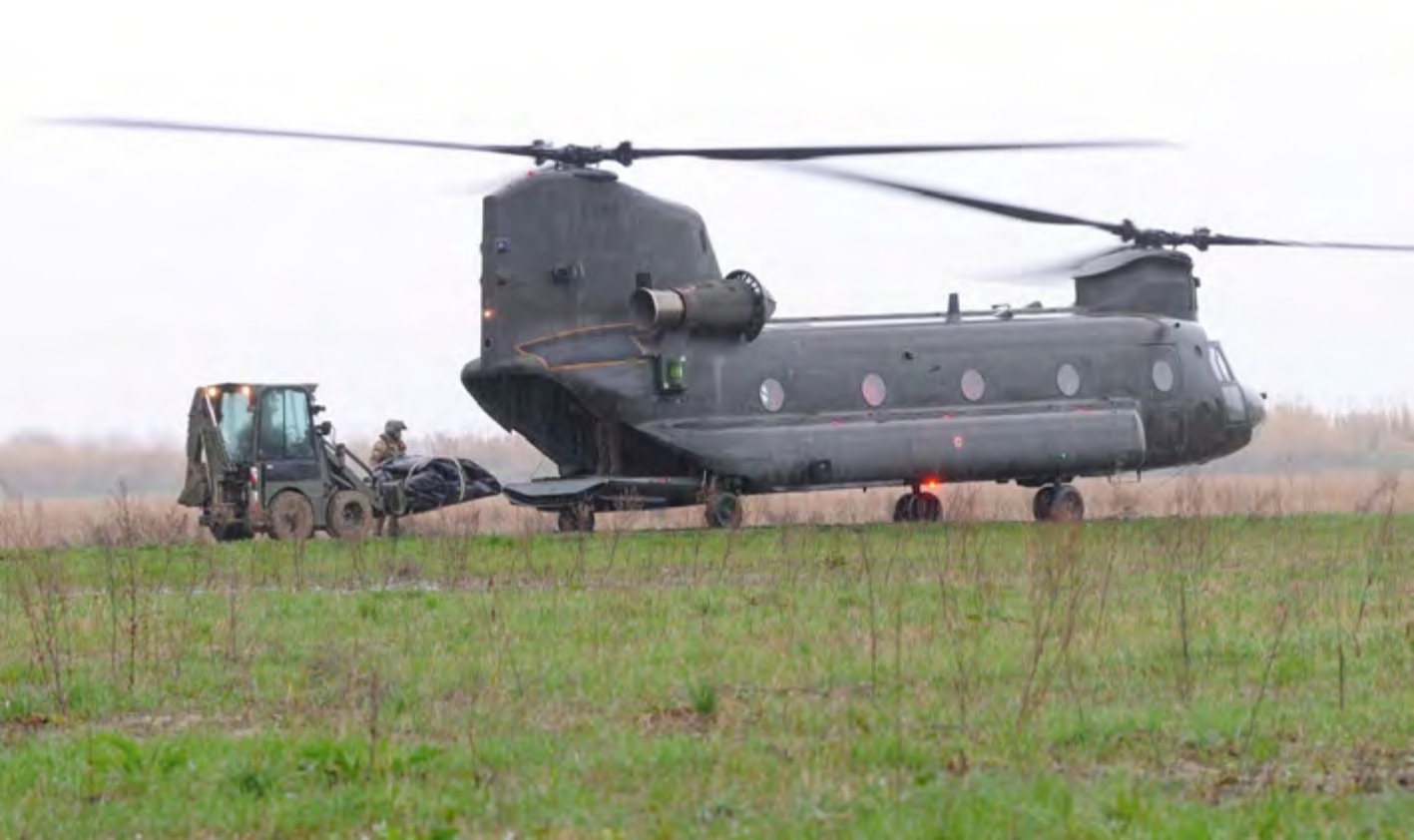 Training of a first batch of personnel (eight pilots and four flight engineers, all qualified instructors) started in June 2014 at the AgustaWestland facilities at Sesto Calende, carried out by Boeing personnel.

Later, in October and November 2014 after delivery of the first F-models, this first group completed the flight transition at Viterbo. These already very experienced crews needed only a familiarisation phase, which lasted about 15 hours for the pilots, and seven to eight hours for the flight engineers. The first courses for operational pilots started on March 9, 2015, and AVES completed qualification of 32 pilots on the new type that year. At present, the courses are managed by the Centro Formazione Equipaggi, the aircrew training section of the Antares regiment. Training courses to qualify new Chinook pilots should start in 2017, which are estimated to be based on about 30 flying hours.

In the meantime, qualification and certification activity for some systems (such as the SIAP and armaments) goes on, carried out in cooperation between AgustaWestland and AVES. The F-model has more advanced maintenance activity compared to the CH- 47C. Part of the technical inspections are no longer dictated by functional or calendar limits, but by the ‘on condition’ philosophy.

The scheduled controls are more similar to those of the civil sector, thus being more frequent and shorter, to reduce stops and improve availability. One interesting additon to the maintenance schedule is the introduction of anti-corrosion checks, every 45–90 days. 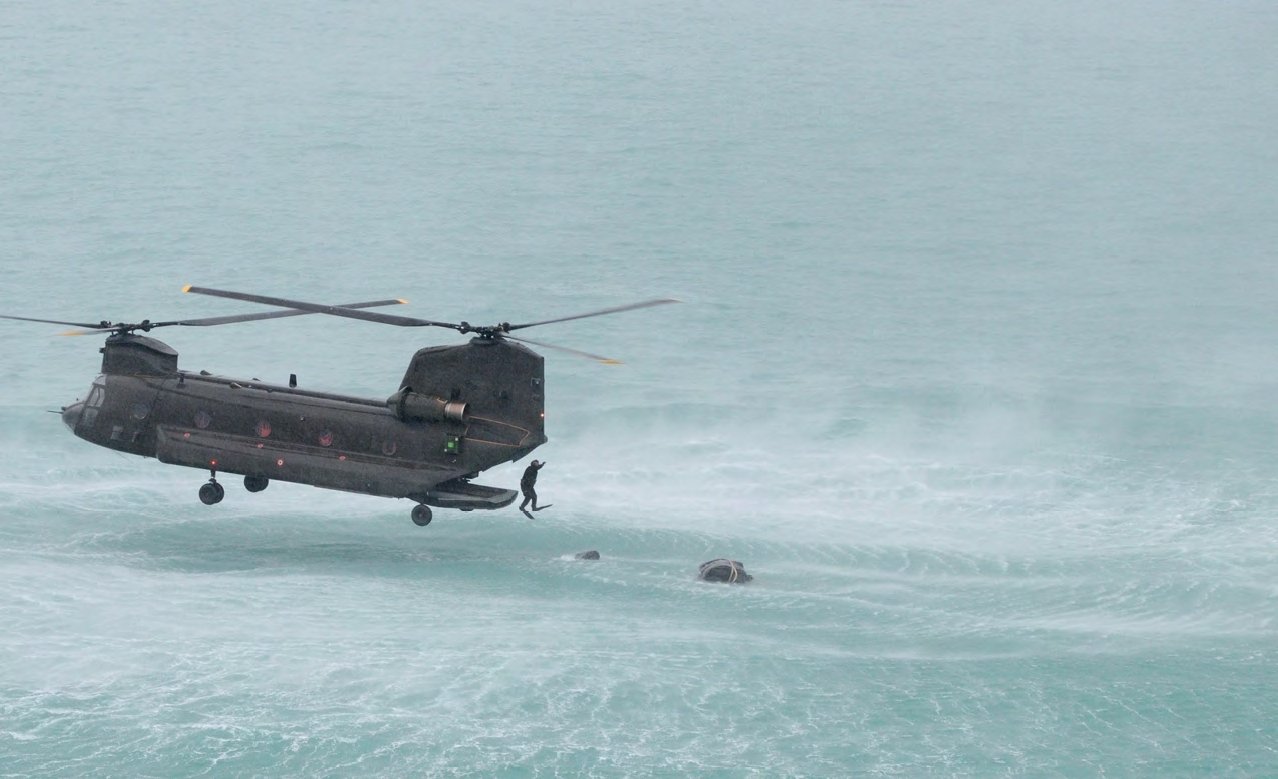 A CH-47C from 3° REOS conducting a soft boat release mission with the 185° Reggimento Artiglieria Paracadutisti during marginal weather conditions in the Thyrrenean Sea.

During AIR International’s visit to the regiment, we had the opportunity to follow a daytime training mission, in support of the 185° Reggimento Artiglieria Paracadutisti (185th Paratrooper Artillery Regiment). On this occasion, an HH-412 conducting fast rope training used the fast rope insertion and extraction system (FRIES), a specific technique used when special forces operators have to be released on a target where it is not possible to land. Using FRIES requires a high level of piloting skill and excellent coordination between the crew and the assault team, which can be achieved thanks to constant training.

Separately, AIR International witnessed a CH-47C helicopter carry out a soft boat release, an insertion technique used to release operators and boats on water. As you can see from the accompanying photo, this activity was carried out in marginal weather conditions – quite representative of a possible real mission, when normal flying units may decide to abort the mission for safety reasons. This is the attitude of the special forces: to master all the technical and professional skills necessary to complete their missions, day or night, with the correct mental attitude to overcome the difficulties.