By Andreas Rupprecht 25th May 2017
Feature 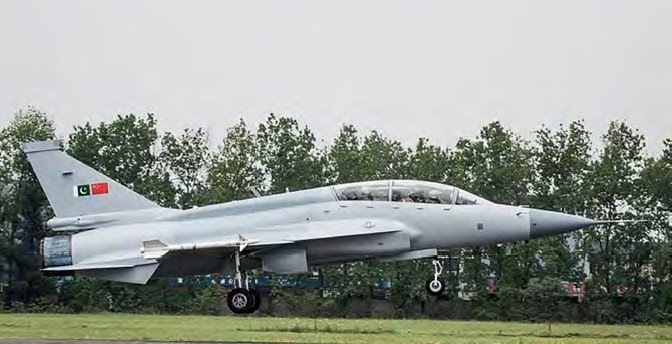 On April 27, the first prototype of the two-seat JF-17B Thunder multi-role fighter performed its maiden flight at Chengdu, China. This version was unveiled by CAC/CATIC at the 2013 Paris Air Show and thereafter the design evolved. Most obviously, the new aircraft features not only a second, aft cockpit and a dorsal spine accommodating the relocated avionics, but also has a slightly taller and more prominently swept tailfin: features that change the look of the fighter from the single-seat variant.

Overall the JF-17B is based on the current Block II JF-17A configuration featuring an inflight refuelling probe and other systems inherited from the forthcoming Block III JF-17A; an enlarged forward fuselage section and radome to house an active electronically-scanned array radar – most likely a KLJ-7A – and a new three-axis fly-by-wire flight control system. Manufacture of the first prototype (c/n 01) had started by early May 2016 and was reportedly complete by December. Reports prior to its maiden flight suggest a first taxi test was performed on April 21. The JF-17B trainer has been built primarily to meet the needs of prospective export customers, which require a dedicated trainer for conversion training. In Pakistan Air Force service, the JF-17B could therefore be used most of all as a lead-in-fightertrainer. Reportedly three JF-17Bs are currently on the production line and two of them will later be delivered to the Pakistan Air Force.