The most successful warbird recovery specialist of the past 25 years, West Sussex-based Jim Pearce, died on 26 July at the age of 87. Born on a farm in Surrey on 21 October 1929, Jim began his working life there, but dreamed of becoming a pilot from a young age. He served with the RAF in Aden, and was to combine his love of flying and his roots in agriculture in the 1970s when he formed a crop-spraying business, going on to clock up thousands of hours dusting all over the world.

Jim rebuilt several 1950s Percival EP9 Prospectors at Lympne during the late 1970s. A little over a decade later, after the fall of the Soviet Union he was able to access many crash sites in the former Eastern Bloc through some of the contacts he had made through crop-dusting. Jim and his team went on to recover more than 50 aircraft, many of which are either now flying or on show in museums around the world.

One of the first recoveries involved the substantial remains of a Focke-Wulf Fw 189 — a previously extinct type — which had forcelanded at Louhki near Murmansk in May 1943. It arrived at Jim’s farm close to Findon in Sussex in February 1992, along with a Messerschmitt Bf 110E-2 found 40 miles west of Murmansk. This was followed by several examples of the Hawker Hurricane, Messerschmitt Bf 109, Curtiss P-40, Ilyushin Il-2, the remains of a Focke-Wulf Fw 190F-8, another Bf 110, and totally intact lake-recovery examples of the Bell P-39 Airacobra and Bf 109E-7. The Bf 109, Werknummer 3523, was originally built as an E-1 and is a Battle of France and Battle of Britain survivor. While being flown on the Eastern Front by 36-victory ace Wulf-Dietrich Widowitz on 4 April 1942, it belly-landed on a frozen lake near Pestamo, eastern Finland, sinking through the ice and remaining on the lakebed until being recovered by Jim in 2003 (see ‘Emil and the Detectives’, Aeroplane October 2004). It is now with Comanche Fighters in Houston, Texas, and will be preserved in original condition. 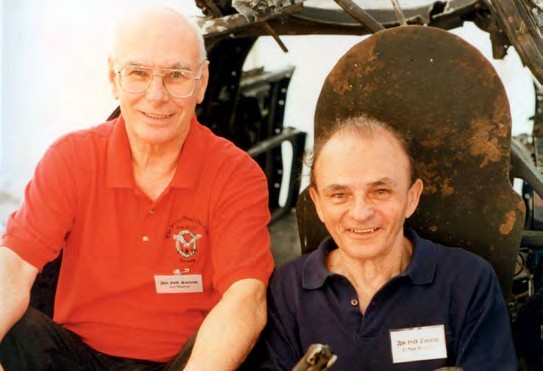 Jim Pearce (left) with Lothar Mothes, the wartime pilot of Focke-Wulf Fw 189A-1 Werknummer 2100/V7+1H, sitting in the aeroplane at Biggin Hill on 15 September 1996. The last time Lothar had seen it he had been crawling away after being shot down in it in May 1943. MICK OAKEY/THE AVIATION HISTORIAN

Jim Pearce also operated a Pilatus P2 and, latterly, a Miles Messenger from his strip in Sussex. On 10 August, at the close of Jim’s funeral at St Mary’s Church, Shipley, warbird pilot John Dodd gave a display in Martin Phillips’ Spitfire IX RR232/G-BRSF, another former Jim Pearce aeroplane, which he sold for restoration to fly during 2001. It took to the air again at Filton in December 2012.