Another pair of classic Pipers from the Just Flight Team

Although the Piper PA-28s are all based on similar airframes, they have nonetheless many differences in design that distinguish between the quite substantial number of variants the company produced. These changes can vary from being as subtle as the shape of the wingtip to quite significant alterations to the airframe and engine that effectively upgraded the aircraft both inside and out. (In fact, I believe the same airframe was used later in the development of the twin-engined Seminole.) 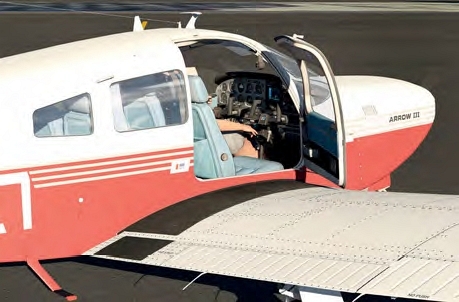 Brilliant modelling around the doors and frames.

Development of the PA-28 series began with the Cherokee 140, which, like most of the aircraft that followed, used a naming convention based on themes derived from the tribes and artefacts of indigenous American people. The Turbo Arrow III was a relative latecomer to the series. First certified on November 2, 1976, it was only in production for two years before the appearance of the Arrow IV with its distinctive T-tail.