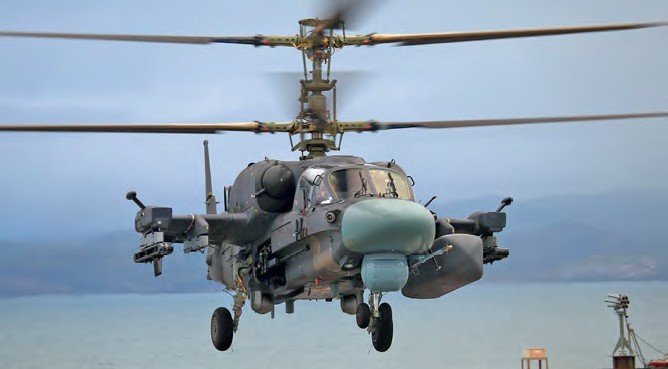 The Ka-52K has successfully completed the first phase of its naval test programme involving two helicopters, which were then transferred to Kamov’s technical facility in Moscow for technical evaluation after an at sea period. Phase one took place between late 2016 and early 2017, with one Ka-52K operating from the flight deck of the Admiral Kuznetsov.

According to Russian Helicopters’ Deputy Director General for sales, Vladislav Savelyev, the Ka-52K successfully completed its naval testing and gained approval for routine operations from the Kutzenov’s flight deck, adding that Ka-52K testing will continue, including flying off the deck of the Kuznetsov. Four pre-production Ka-52Ks were built at AAC Progress for use in development testing followed by a joint state testing effort. A contract covering the delivery of 32 production-standard Ka-52Ks for Russian Naval Aviation was signed by the Russian Ministry of Defence and AAC Progress on April 8, 2014.