Jon Lake found himself at RAF Akrotiri, Cyprus and took the opportunity to speak with members of the Typhoon Force deployed to the base for Operation Shader

AIR International recently visited 903 Expeditionary Air Wing (EAW) to see how the RAF’s Typhoon force was fulfilling its commitment to Operation Shader, the UK contribution to the ongoing multi-national military intervention against Daesh (the Islamic State of Iraq and the Levant).

The UK is one of 77 nations contributing to the operation, though the Commander of 903 EAW, Group Captain Chas Dickens was keen to highlight the fact that: “The Royal Air Force is the second largest contributor to this campaign and our attack and ISR assets are in constant use.” He described his task as being: “to defeat Daesh across Iraq and Syria.”

Operations in Iraq are at the invitation of the Iraqi Government, while in Syria the coalition is working with Syrian Democratic Forces on the ground.

No.903 EAW reports to 83 Expeditionary Air Group at Al Udeid Air Base, Qatar, and then to PJHQ at Northwood. The wing currently comprises a detachment of six Typhoon FGR4s, eight Tornado GR4s, and a number of other aircraft including two Hercules C4s, a Voyager KC3 tanker and a Sentinel R1.

The fast jet detachments (which generally last 19 weeks) are manned by personnel from UK-based Typhoon squadrons on a fourmonth rotational basis. At the time of our visit the Typhoon detachment was manned by pilots and ground crew drawn from 3(Fighter) Squadron based at RAF Coningsby. Nine of the unit’s 18 pilots and about 70 of the 144 engineers and five operations’ support personnel were deployed to Akrotiri at any one time. 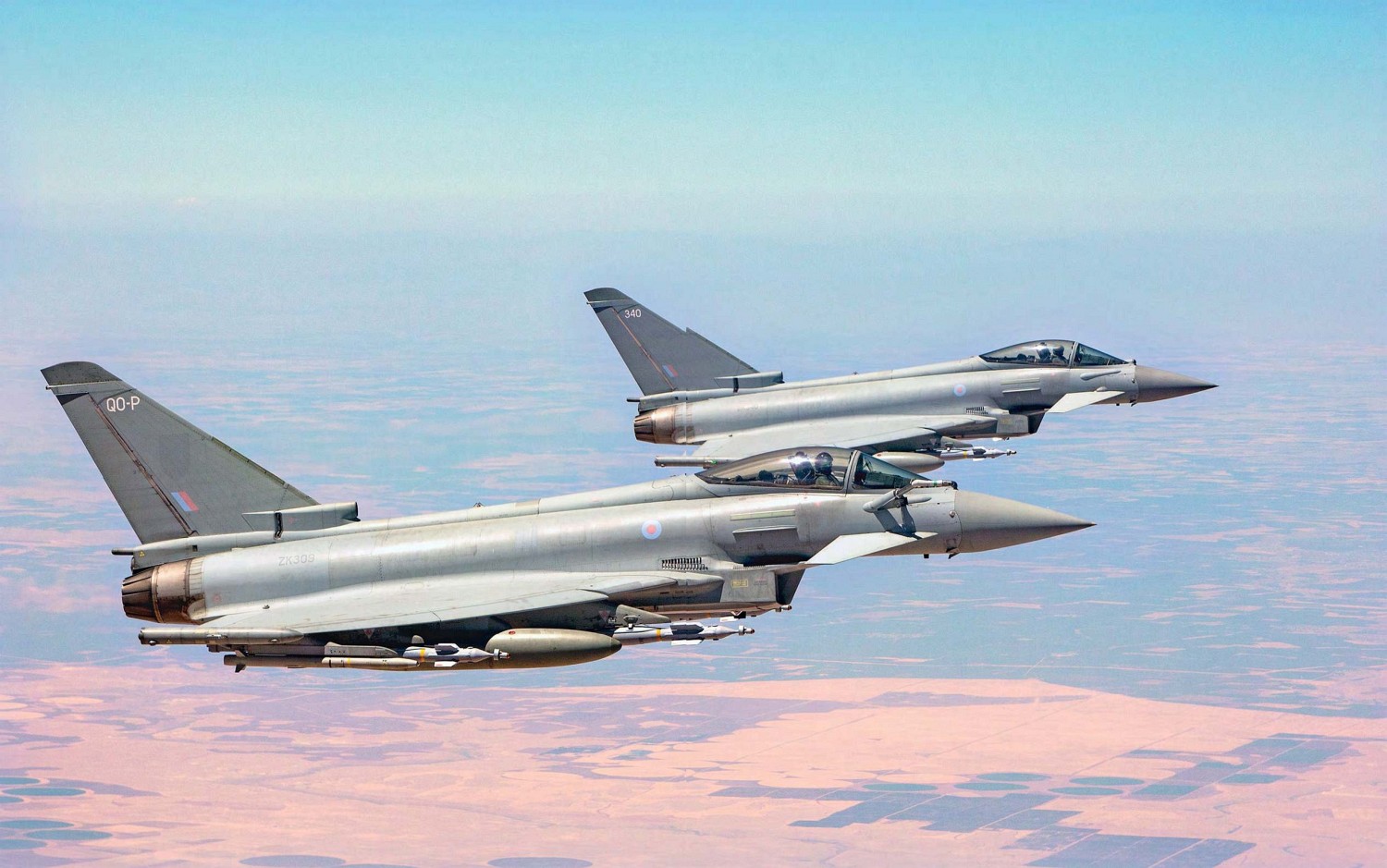 To participate in Operation Shader, RAF pilots have to be qualiied as limited combat ready and have to have a Shader work up covering Typhoon air-to-surface tactics, techniques and procedures. Pilots generally complete a 12-week Shader deployment to Akrotiri during which time they fly every other day – totalling about 18 hours per week (compared to 15 hours per month at home).

The RAF first deployed Typhoon FGR4s on Operation Shader in December 2015, augmenting an existing Tornado GR4 deployment. The Tornado is being withdrawn from service in March 2019, and will inish operations on Shader in February. By then the Typhoon is expected to be operational with both the MBDA Brimstone air-tosurface missile and MBDA Storm Shadow conventionally armed stand-of missile; weapons that are being integrated under the so-called Centurion upgrade.

Typhoon’s Phase 2 Enhancement, or P2EA, confers an initial Storm Shadow capability, and will be ielded on Operation Shader by the end of the year, while the subsequent Phase 3 Enhancement, which gives full Storm Shadow and Brimstone capability, will be operational by the time the Tornado is withdrawn in March 2019. Whether additional Typhoons will be deployed on Shader when the Tornado is withdrawn has not been conirmed by the RAF.

Group Captain Dickens explained that the nature of the air campaign is changing. He estimated that Daesh had been pushed out of 98% of the land they held at the beginning of the campaign, and that the physical caliphate – where they hold ground and control a population – is now very small and is collapsing. His assessment is that the coalition air campaign has killed some 50,000 Daesh fighters, and that Daesh has been squeezed and degraded into the Mid Euphrates River Valley (or MERV) in Syria, although it was now attempting to conduct an insurgency across the region, carrying out terrorist type acts, to demonstrate its continuing capability.

Clearing Daesh from its strongholds in Iraq has led to a growing emphasis on Syria, and the tempo of the air campaign has been reducing as Daesh has been cleared from more and more areas.

The number of weapons being dropped (the kinetic activity) has reduced - particularly compared to the intense ighting around Mosul. The Typhoon detachment commander (Detco) at the time of AIR International’s visit said: “The last time the squadron came out was at the height of the heavy ighting in Mosul and Raqaa and every time you took of there was a very good chance that you were going to drop, and you might expend multiple weapons in a tour, whereas now, it might be only once or twice in a tour when you get to a kinetic event.”

Dickens explained how the operation is going in phases, “when we’re clearing Daesh out of an area we will use more weapons, such as when we cleared Dashisha, and when we clear people out of the MERV, but when we’re dealing with insurgents the use of weapons is less frequent. We will need to identify where they are and wait until they mass and then we’ll look to kill them there and then.”

Dickens highlighted some of the diiculties inherent when attacking insurgents: “We’re trying to be as discriminate as possible. As they attempt to merge into a civilian population obviously the opportunity to engage them just isn’t always there. So though you might ind them and track them there’s no engagement opportunity. We have a very robust targeting process to make sure that we do this with the absolute minimum of collateral damage,” he said.

But while the Typhoons are dropping fewer bombs, they continue to fulil a vital role, clearing the last elements of Daesh out of Syria and providing security and overwatch in Iraq; undertaking strikes there when required.

As Daesh transitions into an insurgency, the air campaign is increasingly focussed on disrupting Daesh networks and stopping their capacity for violence. The biggest challenge is to find and distinguish insurgents from the civilian population. A range of ISR platforms and systems are used to build up an intelligence picture over time and gain an understanding of the normal pattern of life. Unmanned systems like the MQ-9 Reaper, and fast jets like the Typhoon FGR4 and Tornado GR4, then build on that picture, using the Litening advanced targeting pod. The Typhoons fly a lot of armed overwatch (non-traditional ISR or tactical reconnaissance) missions loaded with four Paveway IV precisionguided munitions and self-protection systems enabling strikes to be made when Daesh forces are located and identiied.

One Typhoon pilot said the task is about building upon the broader pattern of life that the big ISR platforms have built up, “trying to gather speciic intelligence on individuals, groups and networks to build that picture. That’s our primary job for most of our time here.”

The Combined Air Operations Centre at Al Udeid Air Base, Qatar plans and controls the air campaign, and compiles the daily Air Tasking Orders; those received by 903 Expeditionary Air Wing at Akrotiri. During AIR International’s visit to the RAF super base, daily light operations comprised two turns, morning and afternoon, each involving a pair of Typhoon FGR4s and a pair of Tornado GR4s; a typical light schedule, six days per week. The place of the RAF’s vuls within the daily ATO can move. A vul, is a US Department of Defense abbreviation of vulnerability time, the period when aircraft are away from base and vulnerable to harm.

Exceptionally, if unserviceability dictates, 903 EAW might launch a mixed Typhoon- Tornado pair, which happened shortly before AIR International’s visit, when a Tornado went unserviceable. Another Tornado was not available, so a Typhoon was launched in its place in order to allow the Tornado mission (one requiring the use of the RAPTOR or Reconnaissance Airborne Pod for Tornado) to go ahead.

Even conigured with the above Shader it, Typhoons take of in dry power, as there is no need to use reheat. The aircraft burns about 110lb (50kg) of fuel per minute, giving about 80 minutes between air refuelling brackets. Missions typically last between six and eight hours, but have been known to be extended beyond nine hours. 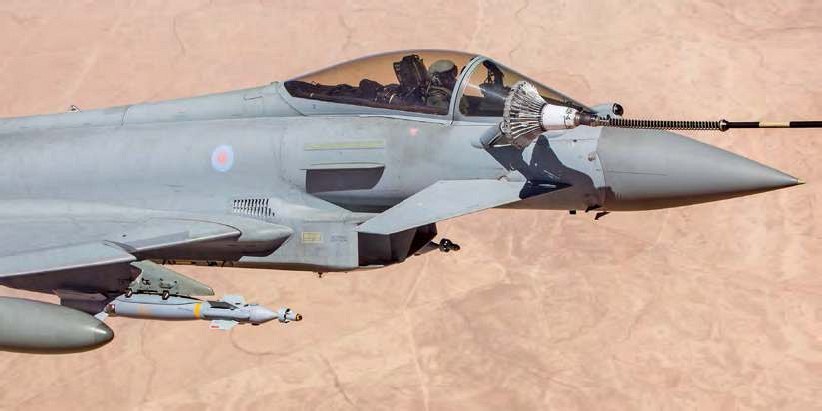 A common shot taken from an RAF Voyager tanker shows a Typhoon FGR4 plugged into the basket and taking fuel, this one during a Shader mission. Note the bright yellow rings applied to the forward fuselage of the Paveway IV bomb denoting it’s a live weapon. 83 Expeditionary Air Group/Royal Air Force 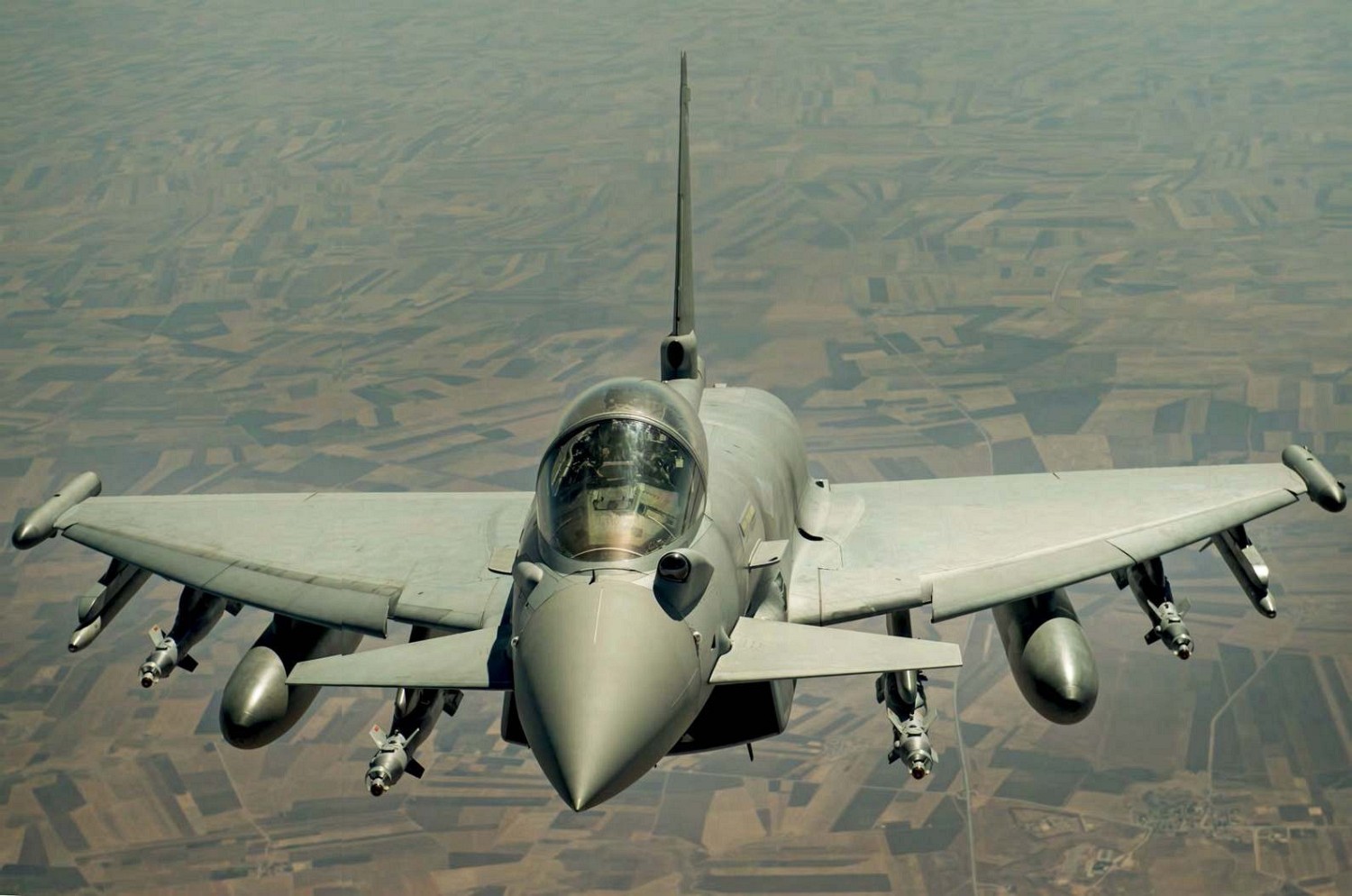 A Typhoon FGR4 moves into the pre-contact position behind a US Air Force KC-10A Extender during a mission in support of Operation Inherent Resolve. The Typhoon is armed with two ASRAAM missiles carried on stations 0 and 12, and four Paveway IV precision-guided munitions, one each carried on stations 1, 3, 9 and 11. The reality of Typhoon still having just one true precision-guided air-to-ground munition to call upon, Paveway IV, after so many years of development must surely be considered a poor reflection of this pan-European defence programme. SSgt Trevor McBride/US Air Force

Laser guidance is used against moving targets where a target’s co-ordinates are changing all the time, or in the face of GPS jamming, or when less accurate co-ordinates are available. The ability to engage a high value target, a known individual, while they’re in a vehicle, in the open, well away from the civil population is highly prized. And although the Paveway IV is not optimized for hitting moving targets, the capability has successfully been demonstrated on Shader.

Though RAF Typhoons and Tornados are normally tasked to operate over Syria, they can rapidly reposition to attack Daesh fighters wherever they come together, in Syria or Iraq. This sometimes leads to extended sortie lengths of nine hours or more.

The environment is not highly contested, nor is it entirely benign. “There have been surface-to-air ires against my aircraft, and we have had to adapt our tactics, techniques and procedures based on the threats presented to us. We largely mitigate that threat by flying above it,” said Dickens.

Although RAF Typhoons have undertaken the air-to-air role in theatre – for example during the coalition missile strikes involving RAF Tornado GR4s launching Storm Shadow missiles against Syrian chemical warfare facilities – they do not currently have defensive counter air tasking, unlike the US Air Force’s F-22s, for example.

Explaining the RAF’s position, Dickens said: “The Americans have a diferent mandate to us. We’re here only as a counter Daesh mission. There’s no requirement for defensive counter air.”

Dickens went on to explain that the RAF was operating to the North East of the Euphrates River, and because of the deconliction arrangements with the Russians (which includes a direct line between the Russians and the CAOC at Al Udeid), the Syrian Air Force would not cross the river. He said: “The last thing we want is a miscalculation, we do not want to escalate the campaign.”

While the coalition is trying to defeat Daesh on the ground in Syria and Iraq, Dickens is also tasked with stopping the organisation from exporting and inspiring terrorism around the world, in order to keep the public in Europe and the United Kingdom safe. Taking away the territory that allowed Daesh to present itself as a caliphate or an Islamic state is vital, but so too is disrupting the narrative of success and victory that Daesh has tried to propagate in its slick videos and via its online presence.

Dickens does not see an imminent end to the air campaign. He said: “The coalition will need to stay together to be able to target Daesh whenever they come together to cause insecurity. But it’s really the important part for me to train and partner forces on the ground so that they can provide their own security. Going forward, what we’d really like is for the Iraqi Air Force to be able to target Daesh whenever they mass and to take care of their own security, because at that point the coalition’s job will be complete.”