At Lelystad airport in the central Netherlands, the Stichting Vroege Vogels (Early Birds Foundation) has recently taken possession of a reproduction Lambach HL-II pre-war aerobatic biplane, PH-APZ, and hopes to have it flying soon.

The machine was built by students from the University of Delft during the 1990s, using original surviving drawings, and flew at a small number of airshows. It was grounded in 1997 following the discovery of fatigue cracks in the wing roots and later placed on display in the Aviodrome’s T2 hangar at Lelystad.

The original HL-II was designed by young Dutch engineer Hugo Lambach, a mechanical engineering graduate from the Delft University of Technology, who was taken on by the Koolhoven Aircraft Factory at Waalhaven in May 1932. The North Dutch Flying Club’s first international aerobatic competition was held in Eelde during the spring of 1936, but no Dutch-built aeroplanes were available to participate. A group of Dutch aviation enthusiasts approached Hugo Lambach, commissioning the HL-II for the 1937 event. To speed up design and construction, Lambach Aircraft was established at Voorburg, south-western Holland in January 1937. The 130hp de Havilland Gipsy-powered machine, registered PH-DSA, made its first flight on 2 May 1937, but with little time to prepare for the 1937 aerobatic event the HL-II pilot, Hein Schmidt Crans — who had finished second in 1936 in a Tiger Moth — was placed third, in the face of competition from superior German designs. The following year, the HL-II was comprehensively beaten by the German entries, coming last. There was no competition in 1939, and PH-DSA was destroyed during a Luftwaffe bomber raid at Ypenburg airfield in The Hague on 10 May 1940.

During July 1937 Hugo Lambach had been taken on by Fokker. Post-war he worked as an aviation consultant until his death, at the age of 63, in July 1972. 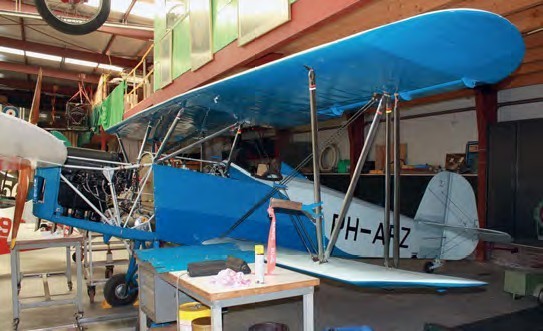