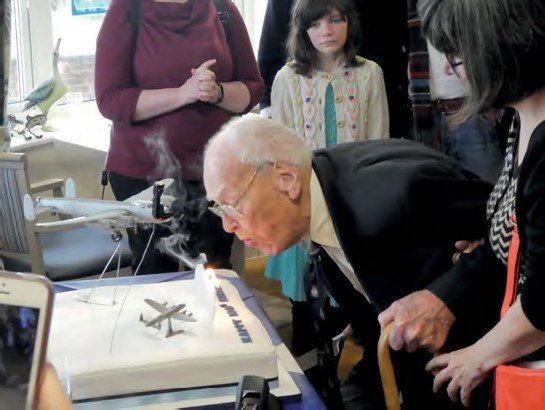 Jo Lancaster blowing out the candles on his 100th birthday cake, with daughter Jenny to his left and Jean, one of his three grand-daughters, looking on to his right. In addition to the model Lancasters, note the ejection seat emerging from the cake!
JENNY LANCASTER

For many years the veteran pilot, who lives in Hassocks, near Brighton, has dedicated countless hours to fundraising and advocating on behalf of the RAF Benevolent Fund.

Heather Kemp, regional fundraiser at the RAFBF, said, “From the first moment I met Jo, he has been such an incredible inspiration to me and everyone at the Benevolent Fund. He has given so much of his time and energy, not only to fundraising on behalf of the Bomber Command Memorial but to signing books day in, day out in all sorts of weather with me at airshows. We’re delighted that he is celebrating amongst fellow Bomber Command veterans at Princess Marina House, and are honoured to be a part of this truly special occasion.”

Jo added, “Us bomber boys have been coming to Princess Marina House for about eight years now and the staff here look after us so well. They’ve been fantastic in pulling this party together for me and I am really grateful to each and every one of them.”

Starting his aviation career in 1935 as an engineering apprentice with Armstrong Whitworth, Jo flew 54 operations during the war, including the first thousand bomber raid on the night of 30-31 May 1942 in a Wellington while still serving with No 22 Operational Training Unit. In 1945 Jo went to the Empire Test Pilots’ School, and the following year to Saunders-Roe at Cowes as deputy to chief test pilot Geoffrey Tyson. As a test pilot on the SR/A1, Jo flew the flying boat fighter at the 1948 Farnborough show, and after rejoining Armstrong Whitworth in 1949 he made his historic ejection when the AW52 flying wing he was piloting from Bitteswell on 30 May 1949 developed a terminal oscillation in pitch during a shallow dive.

He had a feature about his ejection, ‘Setting the Record Straight’, published in the October 2006 issue of Aeroplane.