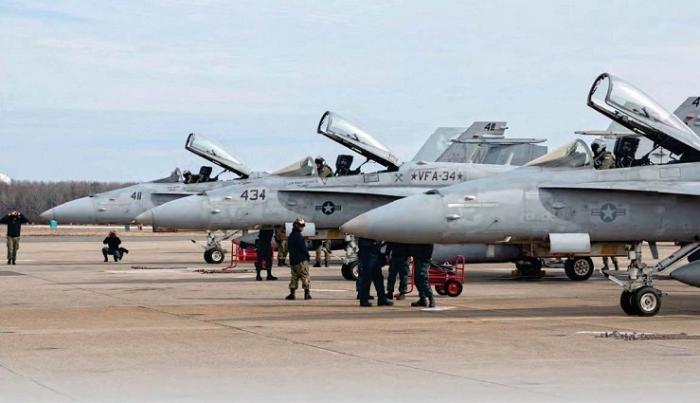 VFA-34 prepares for a final threeship flypast to mark the end of F/A-18C operations on February 1. US Navy/ MCS2C K. R. Jackson-Smith

STRIKE FIGHTER SQUADRON VFA-34 ‘Blue Blasters’ held a sundown ceremony and fly-over for the US Navy’s F/A-18C at NAS Oceana, Virginia on February 1, 2019. The unit was the last operational fleet squadron to fly the ‘legacyl Hornet. The squadron had flown the F/A-18C since transitioning from the A-6E in 1996 and was the only squadron to convert from the Intruder to the Hornet. The ‘Blue Blasters’ made its final cruise as part of carrier air wing CVW-2 aboard the USS Carl Vinson (CVN 70), which conducted a three month ‘Freedom of Navigation’ patrol in the South China Sea that concluded in April 2018. Naval aviators assigned to the squadron subsequently conducted their last F/A-18C carrier qualifications in October 2018.