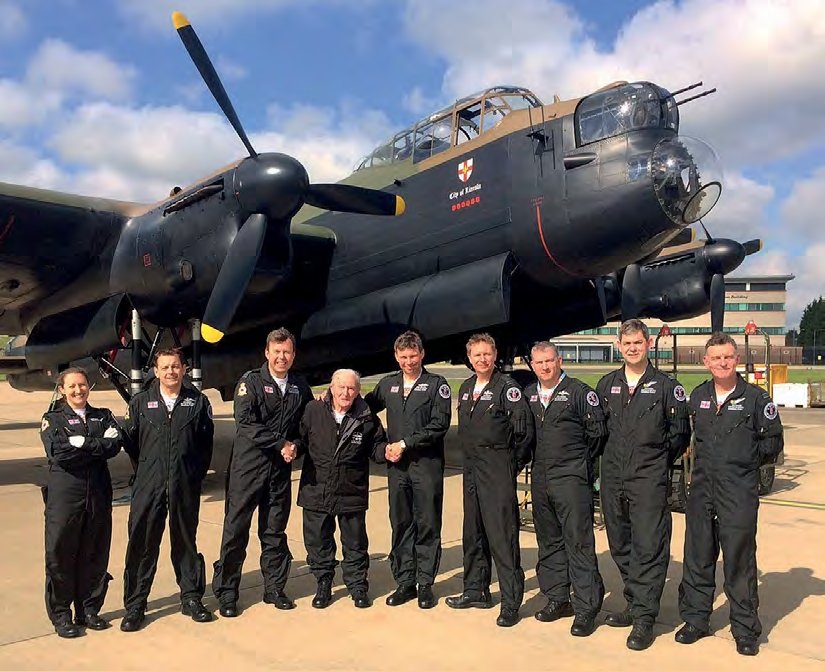 Sqn Ldr George ‘Johnny’ Johnson MBE DFM in the middle of a group of BBMF air and groundcrew in front of Lancaster PA474 at RAF Coningsby on 17 May.
MoD

The last surviving British crew member from No 617 Squadron’s raid on the Ruhr dams, Sqn Ldr George ‘Johnny’ Johnson, flew in the Battle of Britain Memorial Flight’s Lancaster I PA474 from RAF Coningsby on 17 May to mark the 75th anniversary of the raid, Operation ‘Chastise’. Johnson flew in the bomb-aimer position, the same as he occupied in 1943. The Lancaster passed over the dams of the Derwent Valley, exactly the same journey he took just over 75 years ago while training for the mission.

After landing back, ‘Johnny’ said, “It has been a wonderful trip and it’s surprising how 75 years just disappear. Over the Derwent Dam, the time was gone, just like that. I was back there thinking about the times that we went there… I have to say the first time I noticed the hilly area we were going to, I wondered what the hell we were doing down at 60ft, but there it was — that was the job.”