Portugal’s Alpha Jets don’t have much longer to go in service, as Paulo Mata reports 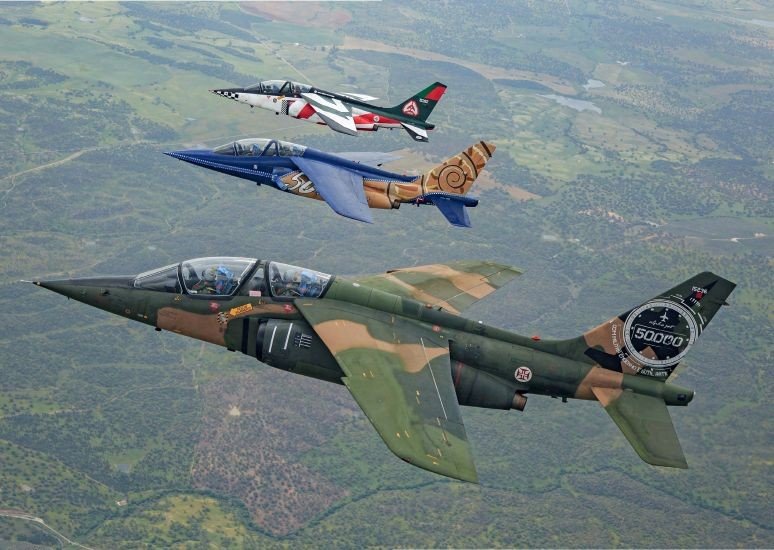 Three of the six remaining Força Aérea Portuguesa Alpha Jets wear a special livery. The jet in the foreground, 15236, received its tail markings in 2012 when the fleet reached 50,000 flight hours.
All photos Paulo Mata

The result of these figures is that the airframes are getting old and its technology further from new generation high-end fighters and trainers. This means the Alpha Jet’s active-duty days in Portugal are getting shorter.

Portugal received a total of 50 Alpha Jets from Germany back in 1993, as part of the payment for the usage of Base Aerea 11 Beja by the Luftwaffe that ended the same year. From the initial fleet, only 40 aircraft were meant to fly, the remaining ten being intended for spares.

The Alpha Jet replaced within Esq 103 ‘Caracóis’ at Beja the T-33 Shooting Star that for almost four decades was used as an advanced pilot trainer until its withdrawal in 1991. The aircraft also succeeded the T-38 Talon that was acquired in the late 1970s to enable the transition to F-5 fighters – something planned but never happened – and that was unsuited to the Força Aérea Portuguesa’s needs.

In the ground attack role, African war veteran the Fiat G.91 Gina from Esq 301 ‘Jaguares’ was also seeing out its service with the Força Aérea Portuguesa in 1993. The Alpha Jet was its natural successor, as the Gina had also been operated by the Luftwaffe

The first six instructor pilots received training at Furstenfeldbruck Air Base in Germany during 1993. The squadron would become ready to fulfil its mission later that same year, and the first Alpha Jet course in Portugal starting in November. Since then, the Alpha Jet has graduated several generations of pilots for the Força Aérea Portuguesa front line. 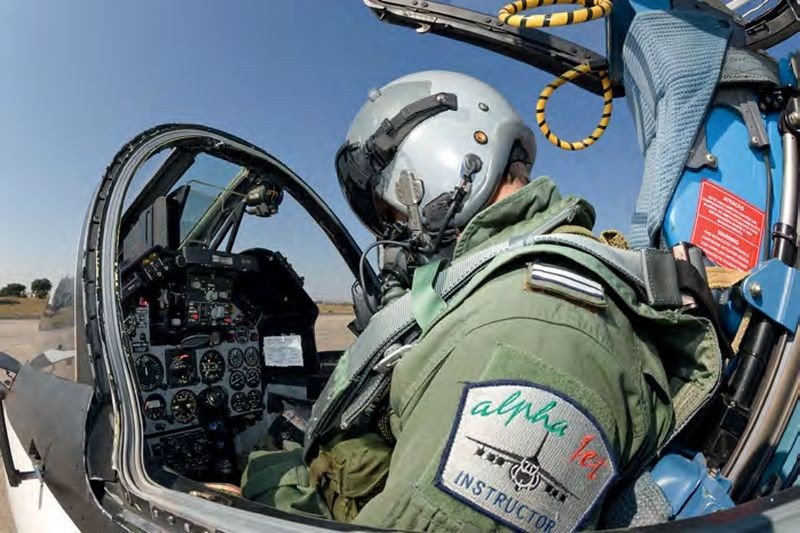 A cockpit upgrade was one of the features of a life extension programme.

If more funding becomes available, the Navy and the Marine Corps will elect to focus spending on procuring new F-35s versus extending the life and improving legacy Hornets. Commenting on buying F-35s at a higher rate during the 2017 US House Armed Services Subcommittee hearing, Lt Gen Davis said the ability to do so would allow the Marine Corps to, “get out of the F/A-18-vice trying to take the Hornet fleet to 2030, push that left to 2025, 2026. If there is one thing I could ask on the TACAIR side for the United States Marine Corps, besides funding our enabling accounts, it would be those new planes.”The Alpha Jet inherited the missions previously attributed to the G.91 Gina, which included close air support, battle eld interdiction and tactical reconnaissance. Thanks to equipment carried in the back seat they would also ful l electronic warfare missions – an important asset in modern warfare and a capability that the Gina was never able to provide.

After the Alpha Jets entered service, Esq 301 was integrated into the NATO Augmentation Force for the Mediterranean area. The ‘Jaguares’ went on to participate in several international exercises, always with high accomplishment rates. These exercises were Dynamic Mix in Italy in 1997, Strong Resolve in Portugal and Dynamic Mix in Turkey in 1998, Central Enterprise and Polygon (Germany) in 1999, Linked Seas (Portugal), Dynamic Mix (Greece) and EOLO (Spain) in 2000 and Clean Hunter (Germany) in 2001.

In 2005, before transitioning to the F-16 MLU, Esq 301 reached the 20,000 hours mark in the Alpha Jet. The squadron conducted its last operational flight with the model on November 20. It then moved from Base Aerea 11 Beja to Base Aerea 5 Monte Real, leaving Esq 103 as the sole operator of the Alpha Jet in the Força Aérea Portuguesa.

With the end of the Alpha Jet usage by the ‘Jaguares’, stra ng and bombing activities were reduced and electronic warfare equipment deactivated in the fleet.

Maintenance Just like the rst pilots, the initial ground crews also received training in Germany to get to know the new aircraft they would work with.

The Alpha Jet A was a German-built aircraft for the Luftwaffe and thus supported by German industry. This brought some dif culties regarding supply chain logistics for aircraft parts from the early days.

These dif culties had to be addressed because of the constant delays in parts supply and exorbitant price of some components, due to the monopoly of some suppliers who had no certi ed competitors. The Força Aérea Portuguesa eventually joined the Armée de l’Air and Force Aerienne Belge – which used the French-constructed Alpha Jet – in creating a working group intended to exchange technical data, experiences and solutions for common problems to the fleets.

One result of this arrangement was that the original canopy emergency fracturing system was changed by the Portuguese, and the new system adopted later on by the other operators. The ejection seats also began to be revised at Beja so the aircraft could be safely operated and at reasonable costs.

An engine test bank was also installed at Beja, later modernised, providing services not only to the Força Aérea Portuguesa but also to UK company QinetiQ, which uses four Alpha Jet As and the German model engines.

Several other components such as the cannon had their periodic revisions done within the Força Aérea Portuguesa, saving funds and at the same time enlarging capabilities and knowhow within the air force. 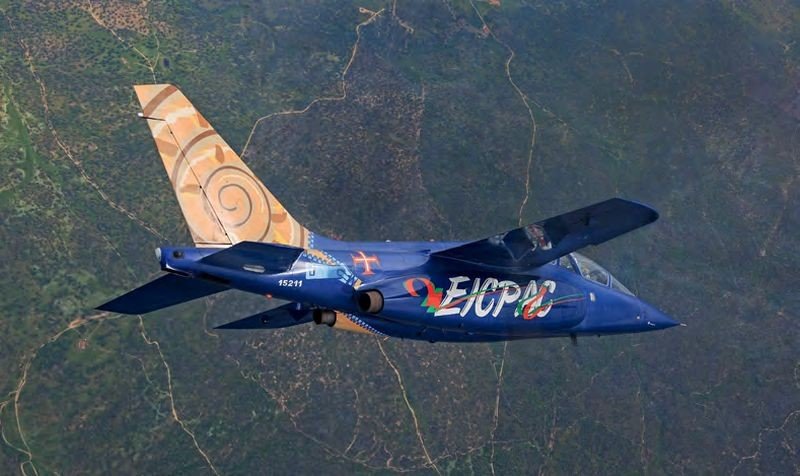 New equipment was tted to the fleet, such as the SPS 1000 radar warning receiver, the ALE-40 chaff and flare dispenser, the reconnaissance system, the AHRS/INS KN- 4071GPS platform, and the smoke system for the Asas de Portugal aerobatic team.

Since the Alpha Jets were acquired with a reasonable amount of flight hours, the aircraft needed to undergo the rst depot inspection (DI) from 1995 onwards, with the work undertaken by OGMA near Lisbon.

The DIs led to 15 aircraft being withdrawn from service, the inspections showed they had used up their flying hours, leaving 25 t to fly by the turn of the century. This number would remain stable until 2006, when the second DI began. The number of operational aircraft gradually reduced further to the six remaining today, with withdrawals taking place as critical components of the aircraft reached the end of their life cycle.

Only one accident has occurred during the 52,926 flight hours of Portuguese Alpha Jet operations up to February 14, 2017. That involved two aircraft in a mid-air collision in October 2003. This was not caused by either maintenance or the aircraft. One aircraft returned to base and landed and the other one crashed, with the pilot ejecting safely. 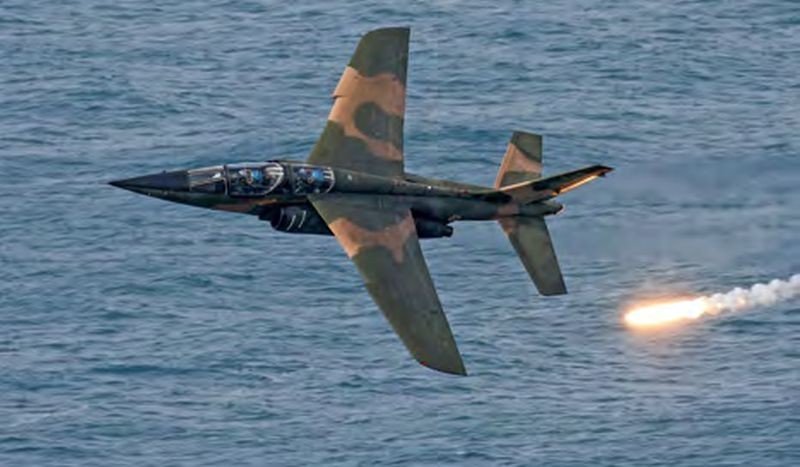 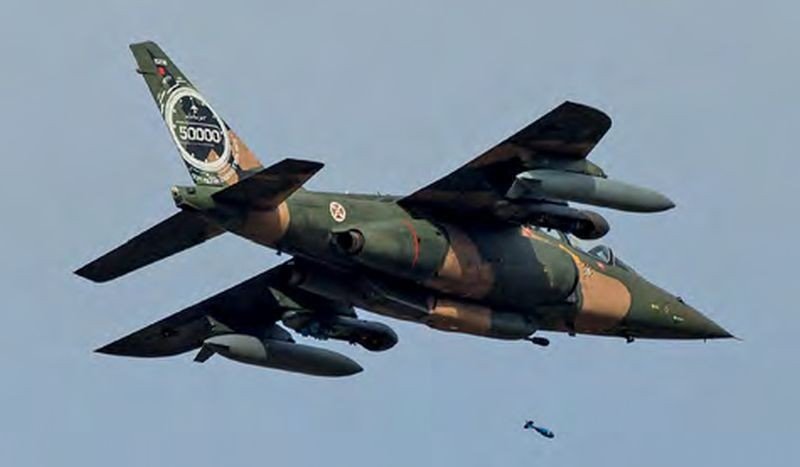 5 Armament release was introduced in the fighter pilots’ course syllabus with the arrival of the Alpha Jet. In the 2016 edition of Exercise Real Thaw in Portugal, an Esq 103 aircraft managed a simulated kill of an F-15 Eagle.

The Asas de Portugal (Wings of Portugal) team and Esq 102, which used the Cessna T-37, was deactivated in 1991 due to structural problems in the airframes. The team would return in 1997 with Esq 103 using six Alpha Jets. Their displays would be restricted, however, to a couple of exhibitions within national boundaries, in aircraft wearing the normal camoufiage paint scheme of the Portuguese fleet.

Then in 2001, with the 50th anniversary of the Força Aérea Portuguesa the next year, a new aerobatic team came to light, Parelha da Cruz de Cristo (the Cross of Christ Pair). This couple of Alpha Jets impressed both public and professionals from the beginning and cemented a will within the Força Aérea Portuguesa to restore the country’s aerobatic display team tradition. 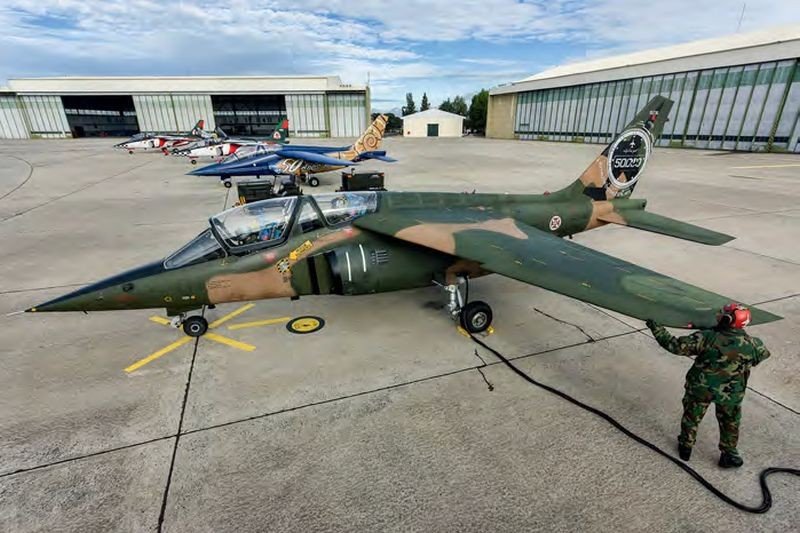 Officially reactivated on July 1, 2004 this pair of Alpha Jets returned to public demos in 2005, again as Asas de Portugal, with a new colour scheme. The team performed nationally and internationally on a regular basis until 2009, with the last season in 2010 as a solo performance.

Since then, and due to the country’s economic problems, no more aerobatic displays have been performed by the Força Aérea Portuguesa Alpha Jets.

During the period the Alpha Jet has been used by Esq 301, the unit has twice hosted the internationally renowned exercise Tiger Meet, which gathers the squadrons that have a feline as a symbol, such as the Jaguares. In 1996 and 2002 Beja welcomed aircraft painted with feline motifs.

The Tiger Meet places an additional effort for the host squadron, which must organise not only the military missions, but also the logistics and social aspects of the event.

The Alpha Jet fleet and Esq 103 now have six operational aircraft for the tasked training missions, with the type’s service in Portugal scheduled to end by February 1, 2018. The Portuguese Government, aided by Força Aérea Portuguesa staff, is studying how the country’s fighter pilots will be instructed in the future. To date, no decision on a replacement has been made. Several possibilities are on the table, from moving to cheaper modern turboprop aircraft, to lastest generation training jets. Another alternative is simply running fighter pilot courses entirely abroad.

The possibility of South Korea installing a pilot training centre at Beja, equipped with T-50 Golden Eagles, has long been cast aside. Separate negotiations with a wellknown Canadian private defence company for a similar project to set up new training facilities at the base, but involving upgrading the Força Aérea Portuguesa Alpha Jets, seem to have gone cold as well.

During the Alpha Jet’s service in Portuguese colours the aircraft showed itself to be reliable and safe, and perfectly capable of fulfilling the roles it was assigned for. The milestone also refiects the dedication of all those who worked and flew in it.

Time doesn’t forgive, however, and even though there’s a considerable number of mothballed airframes that can be reactivated and put to flight condition for an effort rate of up to 150% (upon the necessary inspections, repairs and upgrades), the chances that will happen are growing slimmer every day.

It seems like these really are the Portuguese Alpha Jet’s last days. It will be dearly missed. 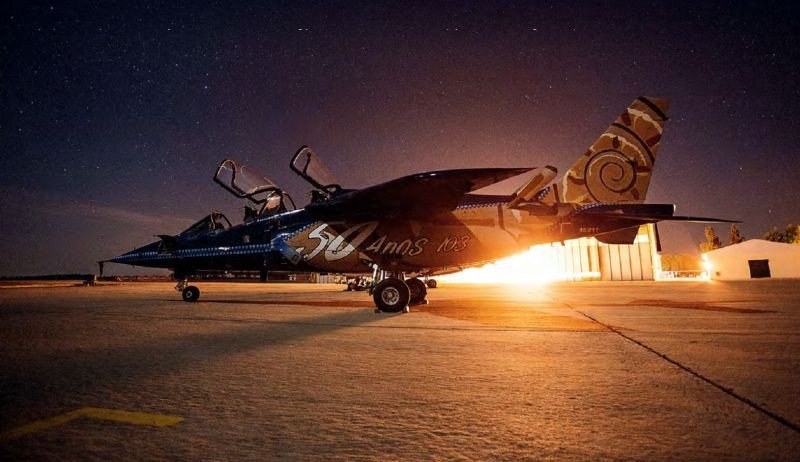 6 Night missions are part of the fighter pilots’ course syllabus at Beja.