The last Supermarine Spitfire to be used as an instructional airframe in the world has finally been released by the PEC University of Technology — formerly Punjab Engineering College — at Chandigarh following protracted negotiations, and arrived on a truck at the Indian Air Force Museum at Palam, Delhi on 10 August. The machine, MkXVIII HS683, was presented to the college in 1962 by AVM Harjinder Singh, who took a keen interest in establishing an aeronautical department there. Nearly 60 years on, it is in a remarkably good state of preservation. The fighter is now expected to form part of the programme to get one, if not two, Spitfires flying for the Indian Air Force Vintage Squadron.

Originally serialled TZ219, the Spitfire arrived in India on 11 February 1946 and was accepted on Far East charge two weeks later. The machine isn’t thought to have seen much service in India, most likely remaining in store until being transferred to the Indian Air Force on 31 December 1947 and given the serial HS683.

Also delivered to the museum on 10 August was the former technical school Auster Aiglet VT-DYU. Meanwhile, Palam’s Spitfire XVIII SM986 and Hurricane ‘AB832’/Z7059 have both been paint-stripped and are in the process of being repainted with detailed and accurate liveries. 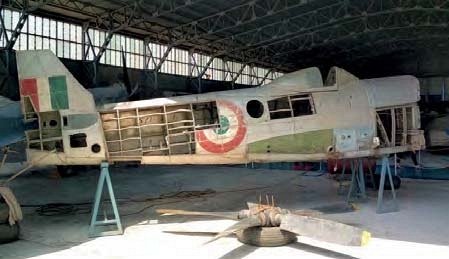 The fuselage of Spitfire XVIII HS683 at the Indian Air Force Museum at Palam in mid- August, showing evidence of its long career as an instructional airframe. VIKRAM SINGH