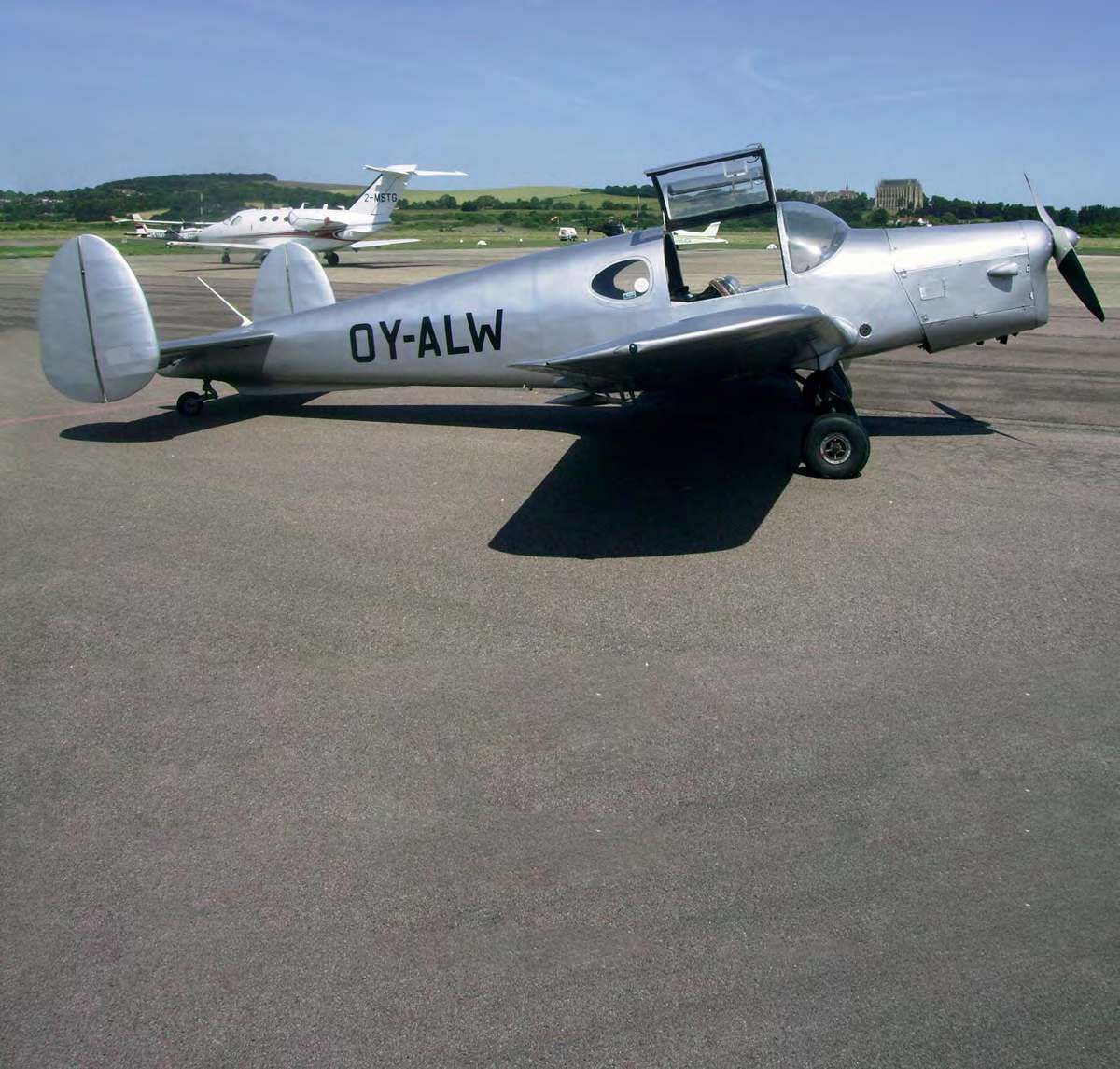 Miles Mercury OY-ALW/G-AHAA parked at Shoreham, Sussex on 2 July, during the ferry light from Denmark to its new home at North Coates.
MARK HALES

Sixty-two years after it was exported to Germany, Miles M28 Mercury VI G-AHAA returned to the UK on 2 July following acquisition by North Coates, Lincolnshirebased Miles enthusiast Stuart Blanchard. Registered OY-ALW, the 1946-built four-seater had been based at Stauning Airport in western Jutland, Denmark, since 1976, originally with the Dansk Veteranlysamlung and since March 2003 with Hans Kolby Hansen.

The retractable-undercarriage, twin-tailed machine was collected by well-known historic racing driver/pilot Mark Hales and Stuart Blanchard. Mark Hales says, “There were no problems, really, other than the heat which meant we couldn’t cruise at optimum speed because the oil temp went into the red, and the fact we didn’t know how much fuel it would actually use, or how much oil. So we kept the legs short, staging through Husum- Schwesing in Germany, Hoogeveen and Hoeven/Seppe in the Netherlands, Kortrijk-Wevelgem in Belgium for an overnight stop, and then on to Shoreham on 2 July where we were greeted by Miles historian Peter Amos and Jeremy Miles, the son of Frederick Miles. Then it was on to Goodwood where I was working on track, so we had an overnight stop, and at the end of the next day it was on to North Coates. The light was 812nm long, and took seven hours 40 minutes.”

The M28 was designed in 1939 by Fred Miles, technical director and chief designer of Phillips and Powis Aircraft, as a replacement for the Miles M11 Whitney Straight and M17 Monarch. The outbreak of war temporarily put the project on hold, but in 1941 it was revived as a single-engined training and communications machine. The prototype MkI made its irst light from Woodley Aerodrome, Reading, on 11 July 1941. Although a further ive prototypes, MkII through to VI, were lown, the type wasn’t to enter production.

The MkVI irst lew on 26 January 1946 and was registered G-AHAA. In May 1946 it went to the British Overseas Airways Corporation (British European Airways Division) at Northolt, being used by Sir Harold Hartley, the chairman of BOAC/BEA, as his personal aircraft until July 1947.

”At Shoreham on 2 July we were greeted by Miles historian Peter Amos and Jeremy Miles, the son of Frederick Miles “

Stuart Blanchard also now owns Miles Gemini Ia G-AKHP and has M48 G-AGOY, the fully retractable-lap version of the Messenger, for restoration. Mark Hales has recently acquired Messenger IIa ‘RG333’/G-AIEK, and will soon collect it from Henstridge. It too will be based at North Coates, a northern powerhouse for rare post-war Miles aircraft.