ON JANUARY 30, the top management of giant Italian company Leonardo introduced its industrial plan for 2018 to 2022. The event was held at the Vergiate plant, where several production and assembly lines within the company’s new helicopter division are located. The event was staged to signal the confidence felt by Leonardo in the rotary-wing sector, in which, like all helicopter manufacturers, it suffered following the downturn in the offshore oil and gas sector. Leonardo’s helicopter division was formerly known as AgustaWestland.

Leonardo’s plan is based on prudence, and transparency. The initial two-year forecast shows no significant results, but using a sustainable forecast model 5% to 6% growth is expected. Clearly, the estimations disappointed financial analysts and investors. During the presentation, Leonardo’s share price fell by more than 12% on the Milan stock exchange, the Borsa Italiana S.p.A.

Such short-term targets were unsatisfactory and merely confirmed the disappointing 2017 forecast, to which Leonardo’s CEO Alessandro Profumo argued: “The market reacted negatively, because the forecast was not expected. We have to look at the growth trend, but I must underline that we expect growth in orders and revenues, and have to convince the market that we will be able to realise what’s promised”.

What’s in the Leonardo’s plan? First of all, let’s consider the financial data. For 2018, the company forecasts growth in orders from €11.3 billion–€11.7 billion in 2017 to €12.5 billion–€13 billion, while revenue remains about the same at €11.5 billion–€12 billion, but earnings before interest, taxes and amortisation (EBITA) is expected to rise a little (from €1.05 billion–€1.10 billion to €1.07 billion–€1.12 billion). Free operating cash flow is expected to fall from €500 million–€600 million to €100 million this year, caused by three factors: the cost of work on the Kuwait Typhoon contract, low results from the aerostructures sector and investments in new products.

The group’s net debt remains the same, at about €2.6 billion. Over the entire five-year plan, Leonardo’s compounded average growth rate should be greater than 6% for orders (forecast at €70 billion), as well as for revenues, and the EBITA rate should increase to 8–10%. Profitability should return to a double-digit value by 2020, and from then cash flow will grow with delivery of Typhoon fighters to Kuwait.

Leonardo is confident it has the right portfolio of helicopter types in the commercial market that is expected to return to growth in the coming years: by 5% or more across their commercial range and by 10% for the AW189 model.

Head of the new helicopter division, Gian Piero Cutillo, said the AW169 and AW189 lines are still relatively young and generate reduced gains, while the complexity of new production and excessive flexibility in response to customer configuration requirements have led to reduced profitability.

The military helicopter market appears to be less promising, due to reduced defence budgets in many countries, even with several programme opportunities and good prospects for multi-role types and for specialised helicopters. Leonardo remains confident in its AW101 dedicated-version proposals for two Polish tenders, one for special forces and another for a new naval helicopter.

Expectations are also high for its innovative and technological products; rotary-wing UAVs and the AW609 tiltrotor which will be certified for civil and military use by 2019. 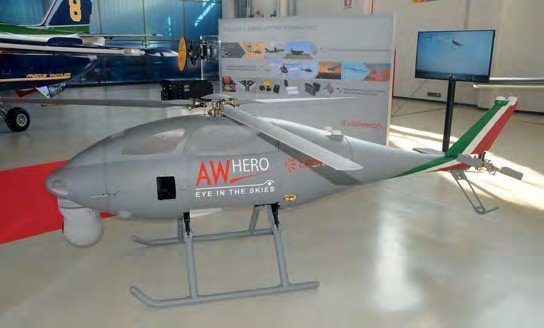 Leonardo continues to work in the military sector on the Typhoon and F-35 lines, but is mostly dedicated to selling its own products, the M-345 and M-346 trainers and the C-27J tactical transport.

A multiyear contract for a multimission C-27J version was formalised in 2017, with an undisclosed customer. The contract still has to be approved by the authorities of the nation involved, but Leonardo hopes a contract will be signed in the first quarter of 2018. Profumo stressed how the company had “worked hard to cut the C-27J price”.

Countries are showing interest in the M-346 trainer, particularly Kuwait and Qatar in the Gulf, Azerbaijan and Pakistan in southwest Asia. In Europe, Leonardo is negotiating further contracts with Poland and Italy, and eagerly awaits a decision by the United States Air Force on the T-X trainer programme. Leonardo DRS, a joint venture with US company DRS acting as the prime contractor, is offering the T-100 based on the M-346.

Confidence about the T-X bid is unsurprisingly running high in Leonardo. The company believes it is well positioned for the competition, offering the best aircraft from a technical point of view.

Commenting on the T-X bid, Profumo stressed it was a mistake to look at the price tag of the aircraft itself, but necessary to “look at the full cost of training a pilot trained with the M-346 aircraft”.

Proof of this consideration is no doubt borne out by the pilot training costs (not seen by AIR International) incurred by current operators of the M-346 Integrated Training System, which according to Leonardo provide higher quality training and reduce the number of flight hours and therefore cost.

Based at Lecce Air Base in southern Italy, the Aeronautica Militaire’s flying school is one example of the system in operation. Besides the international students currently at the school, other air forces are interested in the Italian system. 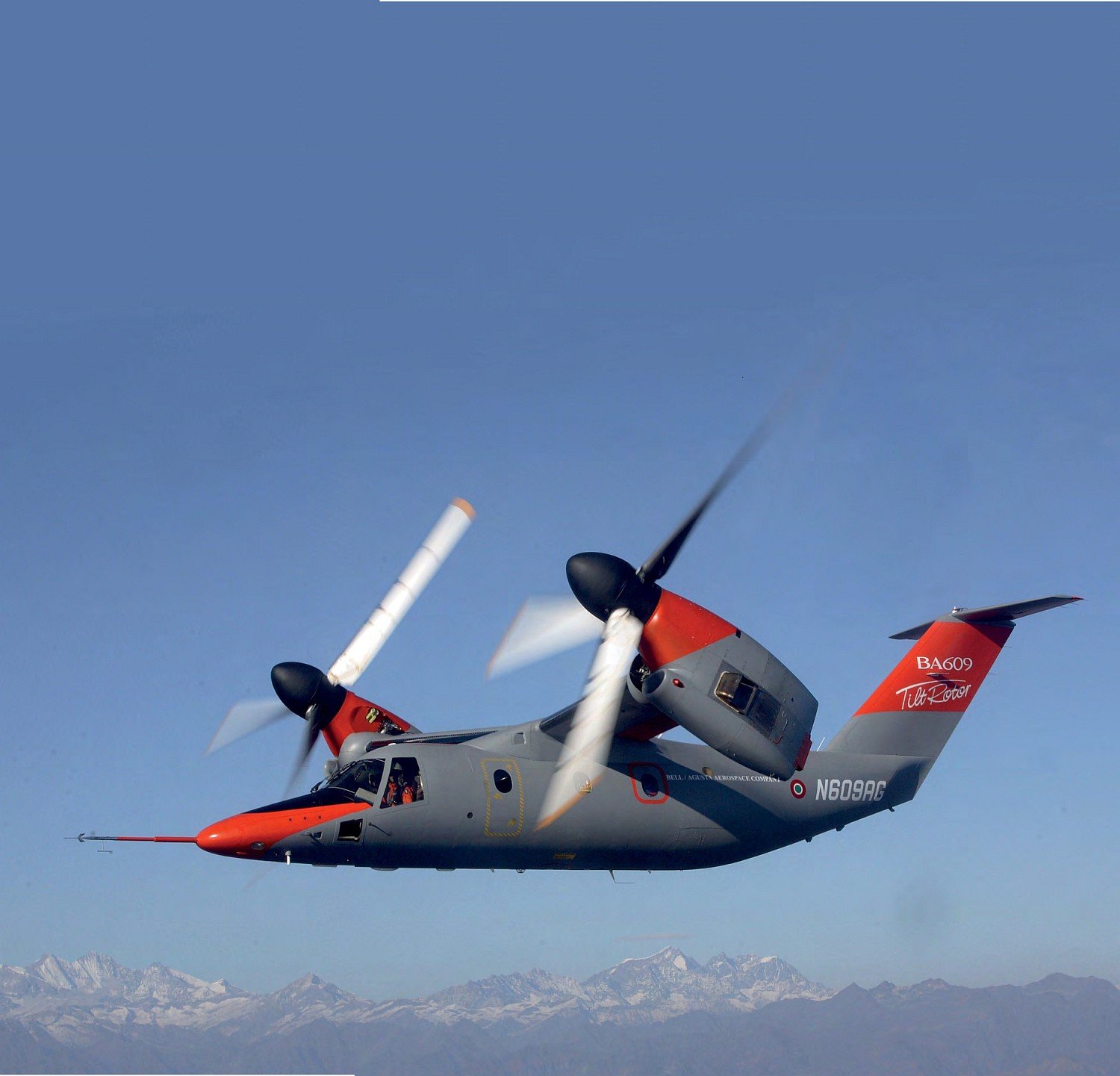 The AW609 is a major Leonardo programme, whose civil and military certifications are expected in 2019. Leonardo

In addition to the above, Leonardo has not included the prospect of an order for Eurofighter Jagdflugzeug GmbH to build 90 nuclear-capable Eurofighter Typhoons for the Luftwaffe (in which Leonardo has a significant production share) within its 2018– 2022 plan. No one knows whether the German Bundeswehr will select Typhoon to replace its Tornado IDS fleet or place an order with the US government for the F-35A Lightning II, understood to be the Luftwaffe’s preferred type. Nor does anyone yet know whether a Luftwaffe Tornado replacement contract will be signed within the timeframe; but if fortune goes Eurofighter’s way, the programme would amount to about €3 billion of revenue for the Italian giant.

Leonardo’s production of aerostructures for Boeing continues, as does its workshare in the Franco- Italian consortium ATR, which is achieving excellent sales. Leonardo wants to continue investing in ATR to fund development of a new generation of aircraft.

Under Profumo’s leadership, Leonardo is increasing its marketing and customer support efforts.

As reported in last month’s AIR International, the company’s structure has changed and the position of Chief Commercial Officer has been created.

Leonardo is currently managing a mix of eight large air, land and sea marketing campaigns in Algeria, Egypt, Qatar, Kuwait, Saudi Arabia, Pakistan, Malaysia and Poland, with the potential for orders valued at more than €1 billion each. Additional opportunities exist in both Australia and Brazil, for air, land and sea systems.

Within the next 24 months, Leonardo plans to launch 70 major marketing campaigns, for a potential total value of more than €20 billion.

Investment in research and development will amount to around €600 million, in part coming from customers.

Leonardo’s plan shows a gradual, and sustainable relaunch of the company in the medium to long term, through disciplining its management, achieving better control of costs and production, and increasing marketing and customer support efforts. There are no magic solutions, but rather a programme based on realistic and prudent considerations.

Profumo underlined that the growth forecasts given in the plan are conservative and does not include major campaigns such as the American T-X trainer and UH-1N helicopter replacement programmes. If some of the strategic competitions are won, then future results will be better than currently forecast.