Lifesavers in the Sky 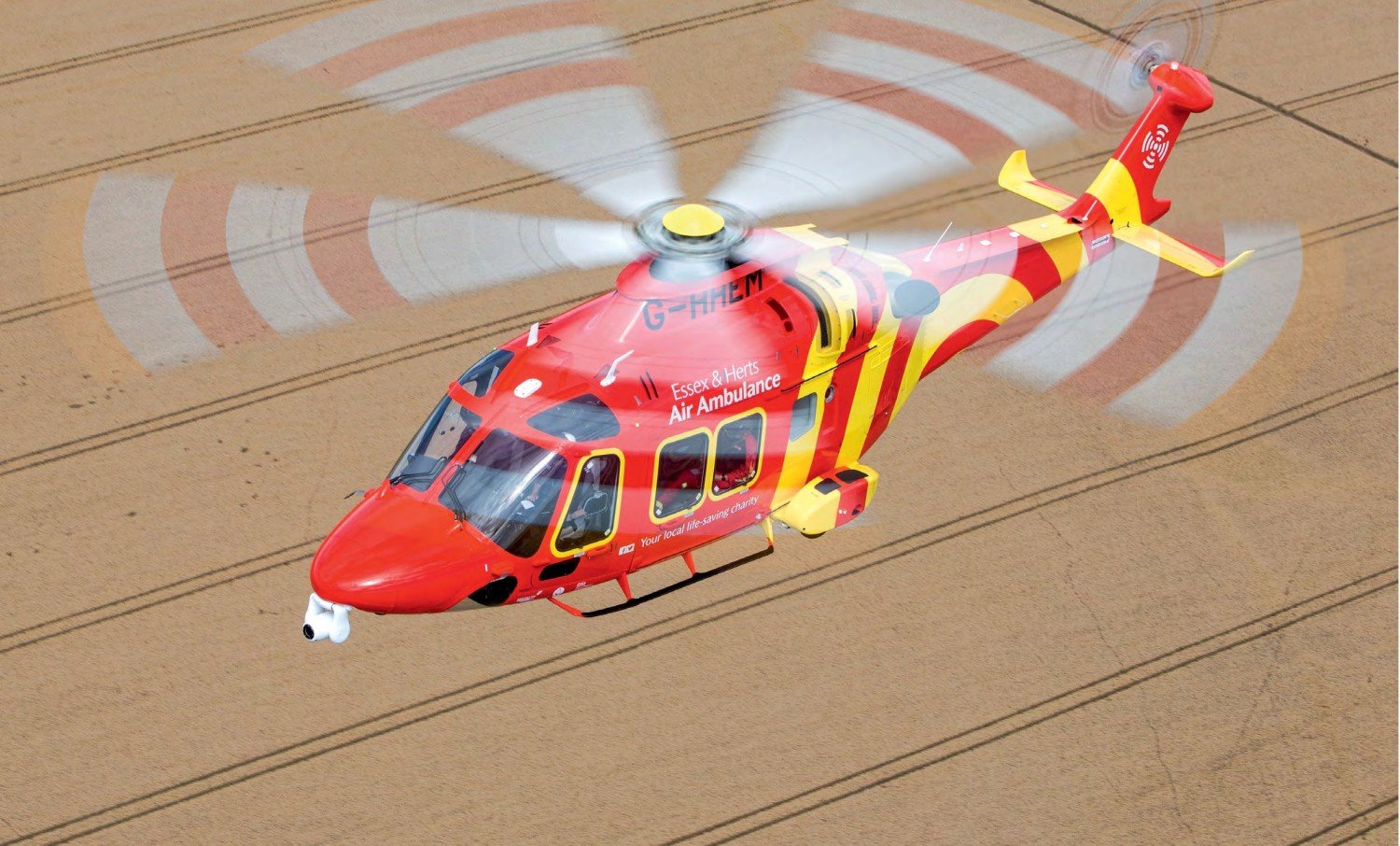 The whole ethos of the air ambulance is to bring high-level critical care to the casualty as quickly as possible, transporting him or her to hospital rapidly to secure a higher chance of surviving a trauma within the so-called golden hour.

The air ambulance model in the UK is very different from the rest of the world, as the service is primarily financed by charitable donations. For each air ambulance trust, the helicopter, the pilot and maintenance are provided by one of the major operators, with flight paramedics and critical care doctors provided by the NHS. The only exception is the Scottish Ambulance Service, which owns and funds its own air ambulance.

Initially, the main air ambulance types used in the UK were the Bo105 and the Eurocopter BK117C1 and AS355. Later came the EC135 and MD Helicopters MD900 and MD902 Explorer.

Some police air support units (ASUs), including those in Dorset, Cambridgeshire, Sussex and Wiltshire, had a secondary role providing HEMS support. These ASUs operated the MD900/MD902 Explorer supplied by Specialist Aviation Services at Staverton in Gloucestershire.

The arrangement between the police and the NHS, which supplied a paramedic, all changed with the advent of the National Police Air Service (NPAS) and the subsequent centralisation of operations. Both rotary-wing and fixed-wing assets were reassigned, which meant these forces lost their aircraft.

A large proportion of the UK air ambulance fleet is supplied and operated by Babcock MCS Onshore. Bond provided the Bo105 across the UK from the late 1980s onwards. Even as recently as six years ago this type was used by the East Anglian Air Ambulance. In 2011, Bond came to the rescue with an EC135 and back-up Bo105 when the two BK117C1s operated by Norwich-based Sterling Aviation for the service were grounded in February that year.

Thereafter Bond won a seven-year contract to provide the East Anglian Air Ambulance with the EC135. In September 2012, it received a new EC135T2e, which is night vision goggles (NVG) compatible.

In October 2014, on the first day of that year’s Helitech exhibition in Amsterdam, Bell Helicopter handed over the first and, so far, only EMS-configured Bell 429 in the UK to the Wiltshire Air Ambulance Trust. The helicopter is operated and flown by Heli Charter (Bell Helicopter’s representative, dealership and authorised service centre in the UK).

The Trust, which has been running since 1990, previously relied on the then Wiltshire Constabulary ASU’s MD902 to provide the air ambulance. The charity paid a third of the running cost for the helicopter. In anticipation of the NPAS establishing and consequently the withdrawal of the ASU, it started to become independent and selected a helicopter. In December 2014, the relationship between the Trust and police ended after 24 years and in January 2015 the Trust started operations with the new Bell 429.

January 2015 was also the month when Heli Charter received full HEMS approval by the Civil Aviation Authority to operate the Trust’s Bell 429. Heli Charter has been in business since 1987 and received Bell approval in 1988. The company has two other bases at Turweston in Northamptonshire and Devizes in Wiltshire, apart from the dedicated main office and facility in Manston in Kent. The Devizes facility is dedicated to the operation of the air ambulance, including maintenance work carried out on the Bell 429. 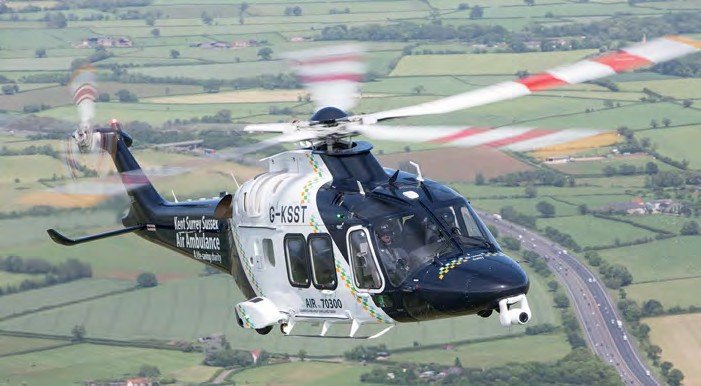 First to use the AW169 for HEMS in the UK in 2016 was the Kent Surrey and Sussex Air Ambulance.
Leonardo Helicopters

This Bell 429 is powered by twin Pratt & Whitney Canada PW207D1 engines and is equipped with a medical interior built and installed by the Swiss company Aerolite. Some of the essential equipment aboard includes the Zoll X defibrillator, CapnoTrue CO2 indicator, the Belmont Buddy Lite fluid warmer and a Lucas CPR device.

The crew have NVGs and the aircraft is equipped with a TrakkaBeam searchlight. This has the option of filters such as infrared or ultraviolet and is slaved to the NVGs.

The Airbus Helicopters H135 series, formerly known as the EC135T (Turbomeca-powered) and EC135P (Pratt & Whitney-powered), in October 2016 celebrated 20 years of service worldwide. In the UK, the H135 has been in service with various air ambulance charities since the early 2000s.

The latest H135 versions, the EC135T3 and EC135P3, were launched to the world’s helicopter community by the then Eurocopter during Heli-Expo 2013 in Las Vegas. There are currently three H135s used in the air ambulance role in the UK. A Pratt & Whitney-powered H135 is with the Devon Air Ambulance Trust, while the Thames Valley Air Ambulance and Hampshire and Isle of Wight Air Ambulance H135s are Turbomeca powered.

Thames Valley was the first UK user of the latest H135 with the helicopter handed over in October 2015 and operated by Babcock. The second operator to take delivery was Hampshire and Isle of Wight.

A first in UK HEMS is that Babcock successfully completed an airborne connectivity project for both these charities. This enables the helicopters to transmit live patient data and condition to the hospital well in advance of arrival.

The EC135T3 and EC135P3 designations signify the two upgraded engine options on the helicopters: Turbomeca’s Arrius 2B2 Plus for the EC135T3 and the Pratt & Whitney Canada PWC206B3 for the EC135P3. Notable features are improved hot and high performance, an increased maximum take-off weight, an improved flight envelope, extended range, cockpit innovations and enhanced interior versatility. On the outside the helicopter physically still looks like any EC135, but closer inspection shows larger main rotor blades and the endplates on the horizontal stabilisers found on the previous models are absent.

The Airbus Helicopters H145 (previously known as the Eurocopter EC145T2 or BK117D2) entered service in the UK for the first time with the East Anglian Air Ambulance in April 2015, under Babcock MCS Onshore.

The H145 is powered by two Turbomeca Arriel 2E engines and is equipped with the new Helionix avionics system. Flown with two pilots it is equipped with NVGs and a TrakkaBeam searchlight. The larger cabin space offered by the H145 compared to the H135 means three medical personnel (paramedics or doctors) can work with a patient. In March 2016, the second H145 replaced the other H135 in Norwich.

The H145 was launched as the EC145T2 or ‘Tango Two’ at Heli-Expo 2011 in Orlando. The noticeable difference between the EC145 and the EC145T2 is the use of the built-in Fenestron opposed to the conventional tail rotor, which adds a measure of safety.

Safety and a reduction in pilot workload is a feature of the Helionx system, which is fully modular and operates between one or more screens. Its features include a digital display in the middle of the instrument panel, which shows the terrain ahead and the helicopter terrain awareness system warns of any obstacles. 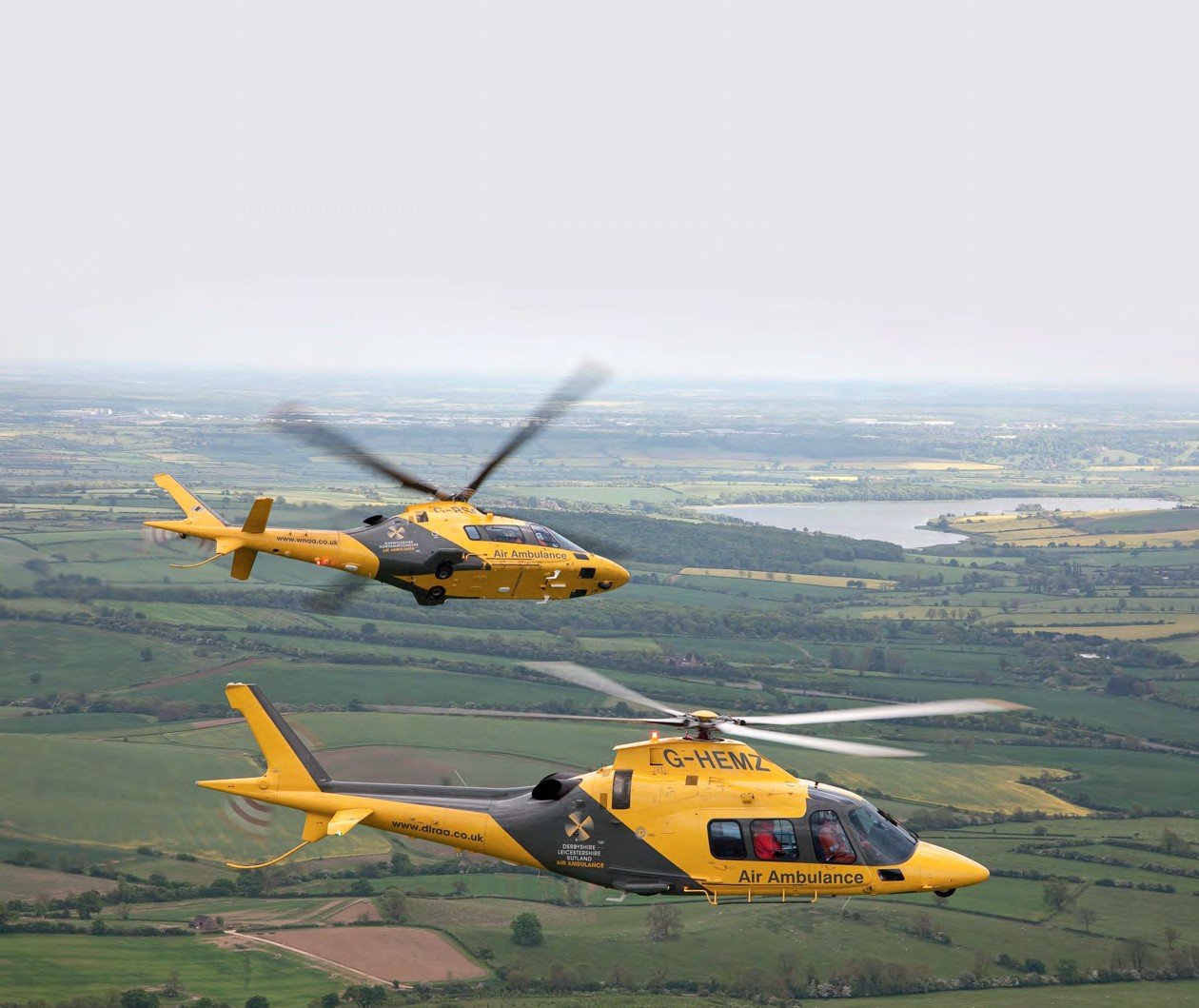 The AW109SP GrandNew G-HEMZ, foreground, and AW109E Power G-RSCU are respectively operated by the Derby Leicestershire and Rutland Air Ambulance from East Midlands Airport and the Warwickshire and Northamptonshire Air Ambulance from Coventry Airport.
Leonardo Helicopters

The H145 was also flown by His Royal Highness Prince William, the Duke of Cambridge, for two years until July 2017 after he completed his service as a Royal Air Force search and rescue pilot flying the now-retired Sea King HAR3.

The Scottish Ambulance Service has received its new H145 and in 2016, the Yorkshire Air Ambulance got a new H145 to replace its MD902. The second H145 was handed over to the charity at a ceremony during the second day of Farnborough International Airshow in July 2016.

The advantage of this design is the safety and quietness of the NOTAR (NO TAil Rotor) anti-torque system, which eliminates the need for a conventional tail rotor. The NOTAR concept is three decades old and subsequently in the last year or so the UK fleet of MD900s and MD902s is being replaced.

The AW109 has a different layout from the other models such as the H135/H145 and MD900/MD902 in that, for example, the height from the cabin to the ground is approximately at waist level for the crews to more easily lift patients in and out of the aircraft. The cabin layout of both the Power and the Grand is designed so the paramedic and a doctor can attend to the patient with full body access without being impeded by the rear bulkhead. The avionics include an enhanced vision system, synthetic vision system and the Highway In The Sky system, which depicts the projected path of the aircraft in perspective view.

Another Leonardo product now operating in the HEMS role in the UK is the AW169. Specialist Aviation Services is the main supplier and provider of the AW169 to UK HEMS charities. The AW169 has the largest cabin area in its class, creating ease of access for both patients and medical personnel. One example is the large sliding doors for loading a patient in or out.

In October 2016 at Helitech, the Kent Surrey and Sussex Air Ambulance’s new AW169 was on show. This was the first AW169 in the UK HEMS marketplace. The charity also signed up for a second AW169 during the show. After a lengthy certification process, Specialist Aviation Services handed over the first three aircraft (one each for the Kent Surrey and Sussex, Lincolnshire and Nottinghamshire, and Dorset and Somerset air ambulances). More recently, in July 2017, Specialist Aviation Services delivered another AW169 to the Essex and Hertfordshire Air Ambulance.

The 4.6-tonne AW169 was unveiled at the Farnborough Airshow in 2010. This helicopter fits in between the AW109S Grand and AW109P GrandNew and the larger 6-tonne AW139. The mock up was depicted in police colours and flew for the first time in May 2012. The AW169 is powered by twin Pratt & Whitney PW210A engines with full authority digital engine control. It has an open architecture avionics suite, including a full glass cockpit, providing maximum situational awareness for the pilot.

Introduction of the new airframes such as the H145 and AW169 into the parapublic service across the UK brings more hope to trauma victims. The increased use of night vision systems coupled with the advance in cockpit displays and terrain awareness/ avoidance gives the ability to operate later at night and more importantly more safely.

In terms of airframe design, there are improvements with ergonomics and room for both patients and aircrew, easing stress and improving comfort in life or death situations. 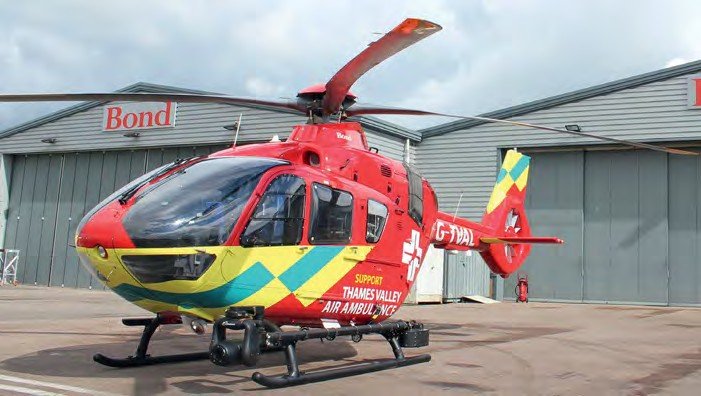 The Thames Valley Air Ambulance is operated by Babcock MCS Onshore, formerly Bond Aviation Services. This was the initial H135 used for HEMS in the UK.
Airbus Helicopters