On 31 July it was officially announced that Messerschmitt Bf 108B-1 D-EBEI and Dornier Do 27B-3 D-EDNU of the Deutsche Lufthansa Berlin-Stiftung (DLBS) will be operated in future by the Paderbornbased Quax-Flieger organisation. They will be based in the spacious Quax hangar at Paderborn-Lippstadt Airport in North Rhine-Westphalia, where Quax Technik is also based. While the Do 27 was flown to its new home at Paderborn, the Bf 108 — one of only three German-produced examples of the Taifun currently flying in Germany — arrived at the hangar by truck.

Both classics were operated by the DLBS for almost three decades. The Dornier served primarily as a tailwheel trainer for Lufthansa pilots before they flew the Junkers Ju 52/3m, D-CDLH. While the future remains unclear for the recently grounded Junkers and Lockheed L-1649A Starliner N7316C, the rebuild of which was suspended at Auburn-Lewiston Airport, Maine in March 2018, there is now a secure future for the foundation’s two airworthy singleengined aircraft thanks to the Quax-Flieger. 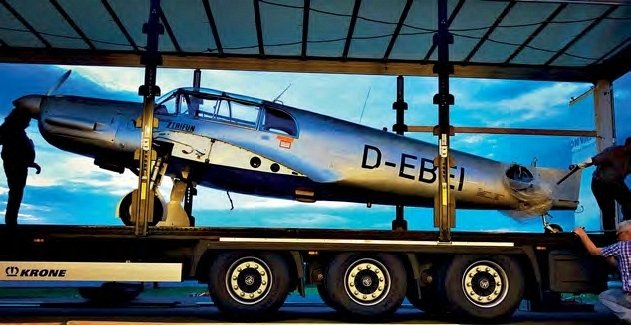 Bf 108B-1 D-EBEI, named Elly Beinhorn in honour of the great 1930s German aviatrix, arrives at Paderborn on a curtain-side truck. QUAX-FLIEGER VIA STEFAN SCHMOLL