The Royal Australian Air Force delivered its first F-35s down under in December setting a new flight record with a very new capability. Nigel Pittaway reports 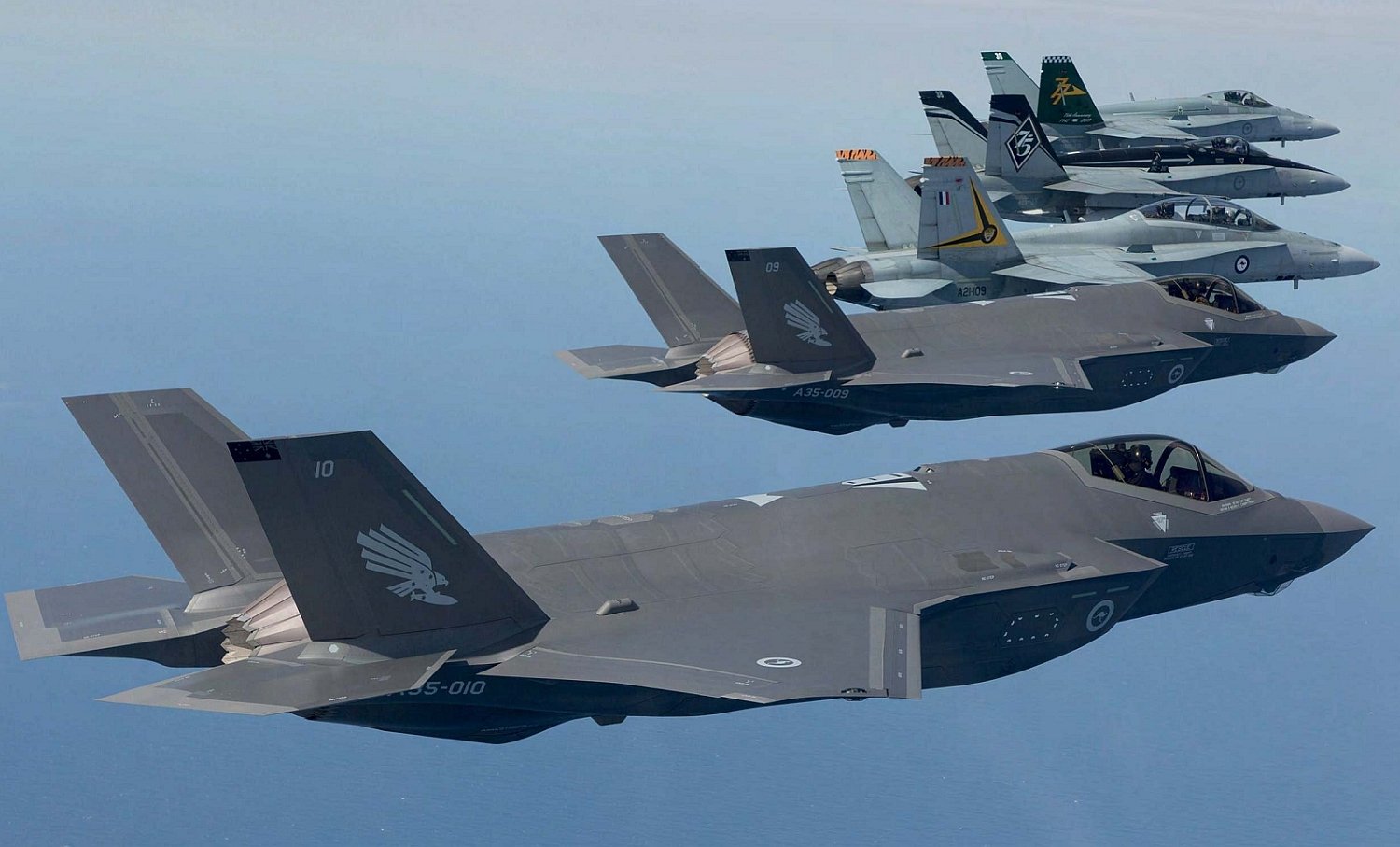 AUSTRALIA BECAME the seventh member of the international Lockheed Martin F-35 Lightning II community to have aircraft located on home soil on December 10, 2018, with the arrival of the first two examples at RAAF Base Williamtown, north of Sydney.

The two F-35As (A35-009 and A35-010) were lown on the last leg of their journey from the United States by the Commanding Oicer of 3 Squadron, Wing Commander Darren Clare, and A Flight Commander Squadron Leader Red Borrman. The unit is the irst operational Australian ighter squadron to convert to the F-35A, after previously operating the McDonnell Douglas F/A-18A and F/A-18B ‘Classic’ Hornet.

The aircraft had begun their delivery light to Williamtown from Luke Air Force Base in Arizona and the original plan was to stage via Hickam Air Force Base, Hawaii and Andersen Air Force Base, Guam, prior to arriving at RAAF Base Amberley, in Queensland, before their inal leg to Williamtown. Their transpaciic ferry light was supported by an Airbus KC-30A multirole tanker transport from 33 Squadron, Royal Australian Air Force, but it was decided to vary the journey to ly direct from Hickam to Amberley. According to the Chief of the Royal Australian Air Force, Air Marshal Davies, the sector set the world record for the longest ever F-35 light to date.

The two jets were escorted into Williamtown by three ‘Classic’ Hornets, lown by the Commanding Oicers of 75 Squadron, 77 Squadron and 2 Operational Conversion Unit (OCU), all future operators of the Lightning. A fourth Hornet, lown by the Executive Oicer of 77 Squadron, acted as a photo-ship during a low-level lypast of local landmarks around Williamtown and nearby Newcastle, before the aircraft touched down at 10:00hrs. A spirited Hornet solo handling display, lown by 2018 Hornet 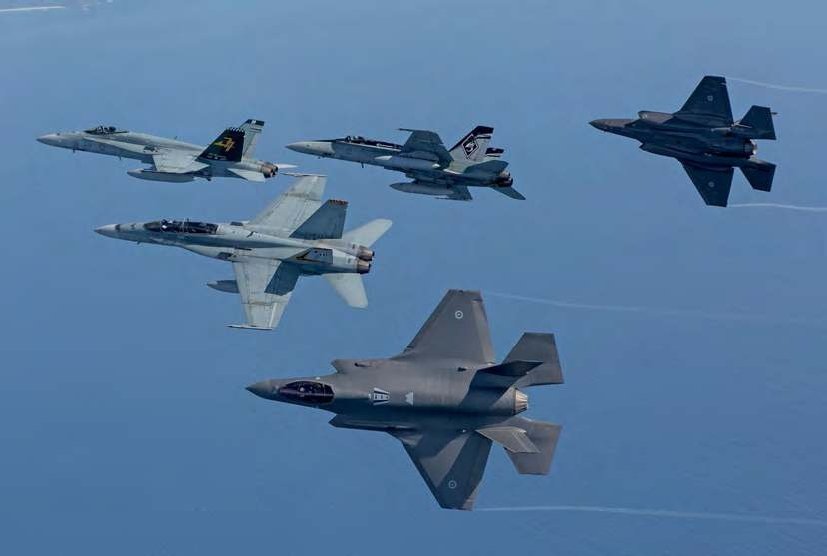 During the formal ceremony to welcome the aircraft home, a visibly happy Air Marshal Davies said: “Today marks a very important day for the Australian Defence Force and particularly the Royal Australian Air Force …Welcome to the latest chapter of the F-35 story, the most significant Royal Australian Air Force acquisition in our 97-year history. The two aircraft that landed here today mark the latest step in an exciting journey for the Air Force, which has been over 16 years in the making. As our previous Chief [AM Geoff Brown] said, the F-35 replaces nothing, but changes everything.”

The two F-35As are actually the ninth and tenth to be delivered to the Royal Australian Air Force and by the end of 2019 it is expected that eight aircraft will be at Williamtown, as 3 Squadron works towards initial operational capability (IOC) for the type, due at the end of 2020. At IOC it is expected that between 30 and 33 aircraft will have been delivered, representing the ability of 3 Squadron to deploy as a combat force and the point at which 2 OCU can commence full pilot training courses at Williamtown. Training is currently undertaken at Luke Air Force Base, Arizona with the US Air Force’s 61st Fighter Squadron, part of the International F-35 Training Center. The eight aircraft previously delivered to the Royal Australian Air Force (A35-001 to A35-008) form part of the training centre and a further two will be delivered to Luke from Lockheed Martin’s F-35 production facility at Fort Worth, Texas, during 2019.

Speaking at the arrival ceremony, Defence Minister Christopher Pyne said: “The government is investing over AUD 17 billion to acquire at least 72 Joint Strike Fighters. The F-35 is the largest acquisition in the history of the Royal Australian Air Force and is a key part of the government’s AUD 200 billion build-up in defence capability.” The two aircraft at Williamtown are now undertaking a two-year verification and validation (V&V) testing phase, aimed at ensuring the F-35 can operate within local infrastructure and IT systems in the lead-up to the declaration of IOC. They are also the first of Australia’s 72 aircraft to be hosted on the sovereign version of the F-35’s Autonomic Logistics Information System and this will also form a major part of the V&V testing.

After IOC, 77 Squadron will convert to the F-35 at Williamtown in the 2021–2022 period, followed by 75 Squadron at RAAF Base Tindal in the Northern Territory between 2022 and 2023. Final operational capability is due to occur at the end of 2023, by which time the ‘Classic’ Hornet fleet will have retired from service. 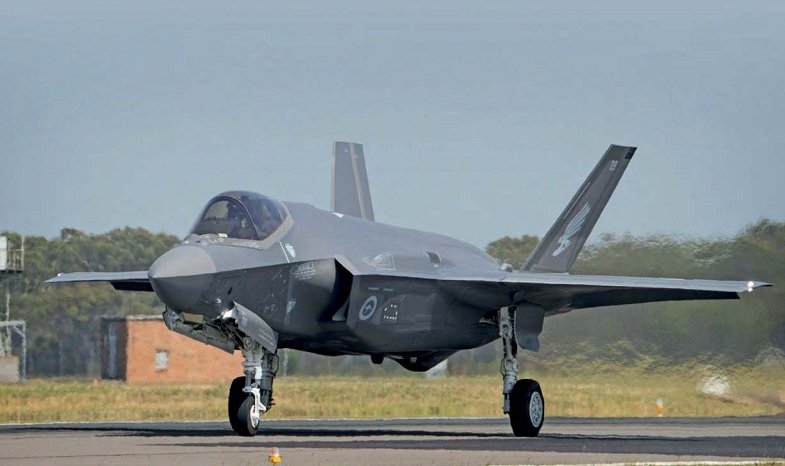 The selection of the F-35 as Australia’s next fighter capability has been controversial from the outset and has had its share of detractors over the years. It was these people AM Davies was addressing at the arrival ceremony when he said: “The F-35 requires a new way of thinking and a new way of operating [and] the Air Force transformation does not end with the arrival of the Joint Strike Fighter …An integrated Australian Defence Force is greater than the sum of its parts and the F-35 has been a driver for this change. So today, ladies and gentlemen, the naysayers can take a seat.”

The Australian government’s selection of the F-35 was formally announced in 2009 with an order for an initial tranche of 14 aircraft, subsequently increased to 72 in 2014. The total requirement is for up to 100 aircraft, initially intended to replace the 71 surviving ‘Classic’ Hornets and the Royal Australian Air Force’s F-111C. However, the acquisition of the Boeing F/A- 18F Super Hornet as a bridging strategy against the premature retirement of the latter has meant a decision on the remaining 28 F-35As has been deferred.

Defence Minister Pyne said: “We haven’t made a decision about the last tranche of Joint Strike Fighters, if there is going to be one. We are currently acquiring 72 [aircraft] and we’re very happy with the arrival of the first two.” 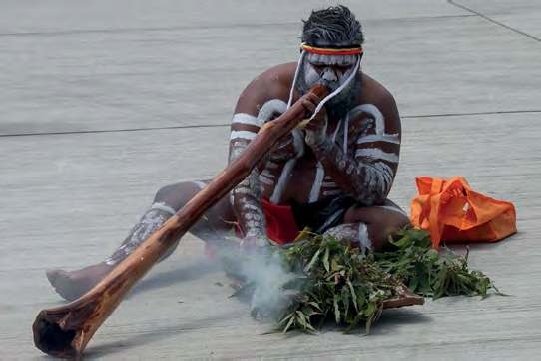