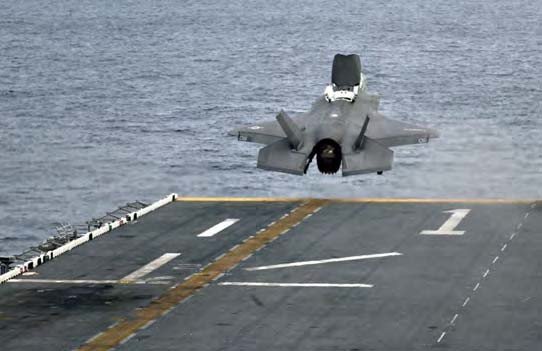 Despite MINDEF’s announcement that Singapore is planning to order a small number of F-35s, the ministry has not specified which variant; the F-35B is under consideration.
Petty Officer Daniel Barker/US Navy 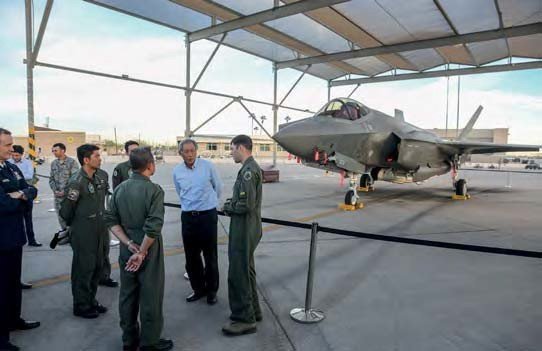 Defence Minister Dr Ng Eng Hen during a briefing on the F-35A aircraft, by officers serving with the 56th Operation Group at Luke Air Force Base, Arizona.
Chen Chuanren

ON JANUARY 18, Singapore’s Ministry of Defence (MINDEF) announced the Lockheed Martin F-35 Lightning II has been identified as the most suitable replacement for the Republic of Singapore Air Force’s (RSAF) fleet of Lockheed Martin Block 52 F-16Cs and F-16Ds that are due for replacement by 2030.

The decision was made after a five-year technical evaluation by the RSAF and the procurement arm of MINDEF, the Defence Science and Technology Agency (DSTA).

According to a MINDEF statement: “The technical evaluation also concluded the RSAF should first purchase a small number of F-35s for a full evaluation of the aircraft’s capabilities and suitability before deciding on a full fleet.”

Defence Minister Dr Ng Eng Hen said on his social media account the next step would be to follow up with the relevant parties in the United States, which would take from nine to 12 months.

Previously, Ng had said that time is needed for the RSAF to procure the aircraft, acquire the necessary training infrastructure and train its pilots and crews to meet the 2030 timeline.

The decision to join the F-35 club was a long time coming, since Singapore joined the Joint Strike Fighter security cooperation programme in February 2003. That decision enabled the island state to have better insight to the development and progress of the then-new fighter programme.

For over a decade, Singapore’s involvement in the programme almost went under the radar until 2013 when, in parliament, Ng highlighted his ministry was in the final stages of evaluating the F-35. During his visit to the United States during Exercise Forging Sabre 2013 and 2015, Ng was briefed on the capabilities of the F-35B and F-35A respectively.

Estimated to cost $85 million per aircraft, the F-35 would be the most expensive combat aircraft procured by the RSAF. Time and time again, Ng stressed that Singapore was in no hurry to commit to the F-35, and not until all checkboxes were ticked.

Given its position as one of the most prudent and discerning arms buyers, Singapore has traditionally waited for any new aircraft to mature and acquire lessons learned from its defence partners. For most of 2013 through to 2017, the F-35 programme was plagued by numerous technical challenges that Singapore hoped would be ironed out.

It’s no surprise Singapore has also sought technical and operational information from long-time regional and defence partners Australia and Israel, especially since the latter has used the F-35A in combat.

AIR International also understands both the DSTA and the RSAF are satisfied that F-35 production and maintenance costs are falling and stabilising, which gives the RSAF a better understanding and prediction of its long-term sustainment costs.

MINDEF did not specify which version of the F-35 it is procuring, although it is widely reported the F-35B Short Take Off and Vertical Landing (STOVL) variant is favoured.

In 2016, a couple of news wires reported Singapore was seeking 12 F-35Bs, though a decision was, of course, put off until the latest announcement.

The Singapore government has announced it will decommission Paya Lebar Air Base by 2030, its largest airfield. Assets currently based there will be moved to a much enlarged Tengah Air Base in the west of the island and to Changi (East) Air Base, a site shared with Changi International Airport.

Closure of Paya Lebar means the loss of three runways, and two taxiways often used as alternate runways. Expansion at Tengah also means the Lim Chu Kang public road, also often used as an alternative runway, will disappear. A dwindling stock of conventional runways means the RSAF will have to reconsider ways to generate airpower in the event of an attack on an airfield. In this scenario, a STOVL aircraft would be an excellent fit.

The island nation is also developing a helicopter carrier, known as the Joint Multi Mission Ship (JMMS). Military analysts in Singapore agree the F-35B could potentially operate from the JMMS once the RSAF and its navy counterparts acquire the required knowhow.

Looking ahead, like previous fighter procurements the RSAF’s new F-35s and their crews will be initially based with a US detachment, either Luke Air Force Base, Arizona, (for the F-35A) or Marine Corps Air Station Beaufort, South Carolina, (for the F-35B). During their stint in the United States, the F-35 detachment is likely to participate in joint exercises such as Forging Sabre to help evaluate its combat doctrines and capabilities with its F-16s and F-15SGs in complex scenarios. More crucial for the RSAF is evaluation of the F-35 in Singapore itself, exposing the aircraft to the harsh tropical conditions of South East Asia.

Unlike most current users, Singapore will operate the F-35 in a highly corrosive environment, faced with high temperatures and humidity.

Only time will tell how the sensitive low-observable coating, parts and avionics will react to the conditions.

One thing is for sure: the F-35 will give the RSAF unprecedented capabilities not found in the South East Asia region. The air arm is no stranger to networkcentric warfare; its fighters are already linked to each other and the broader island defence systems. In March, at Nellis Air Force Base, Nevada, Exercise Red Flag 19-2 will see US Air Force F-35As participating in America’s premier wargame, with RSAF F-15SGs alongside. It might well provide insight to various permutations the RSAF will be able to conduct with its own mix of F-35 stealth and strike capabilities beside its fleet of F-15SG fighter-bombers in the future.