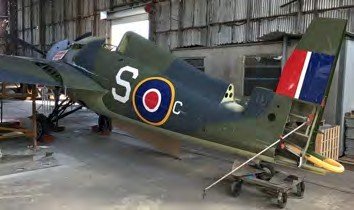 The Ulster Aviation Society has painted the port side of its Grumman Wildcat V, JV482, as restoration of the former Fleet Air Arm fighter gradually approaches completion. It is being finished in the 882 Squadron markings it wore at the time of its participation in the Allied landings in the south of France in August 1944. Four months later, on Christmas Eve, JV482 made its last flight when Sub-Lt Peter Lock ditched the machine in Portmore Lough, County Antrim, following an engine fire. At this time 882 was temporarily based for work-up purposes at RAF Long Kesh, Lisburn — on the site of which the society is based. The recovery of the Wildcat was carried out using an Army Air Corps Lynx in 1984. It has since been the subject of a gradual restoration, which society president Ray Burrows hopes will be finished in around five years’ time.