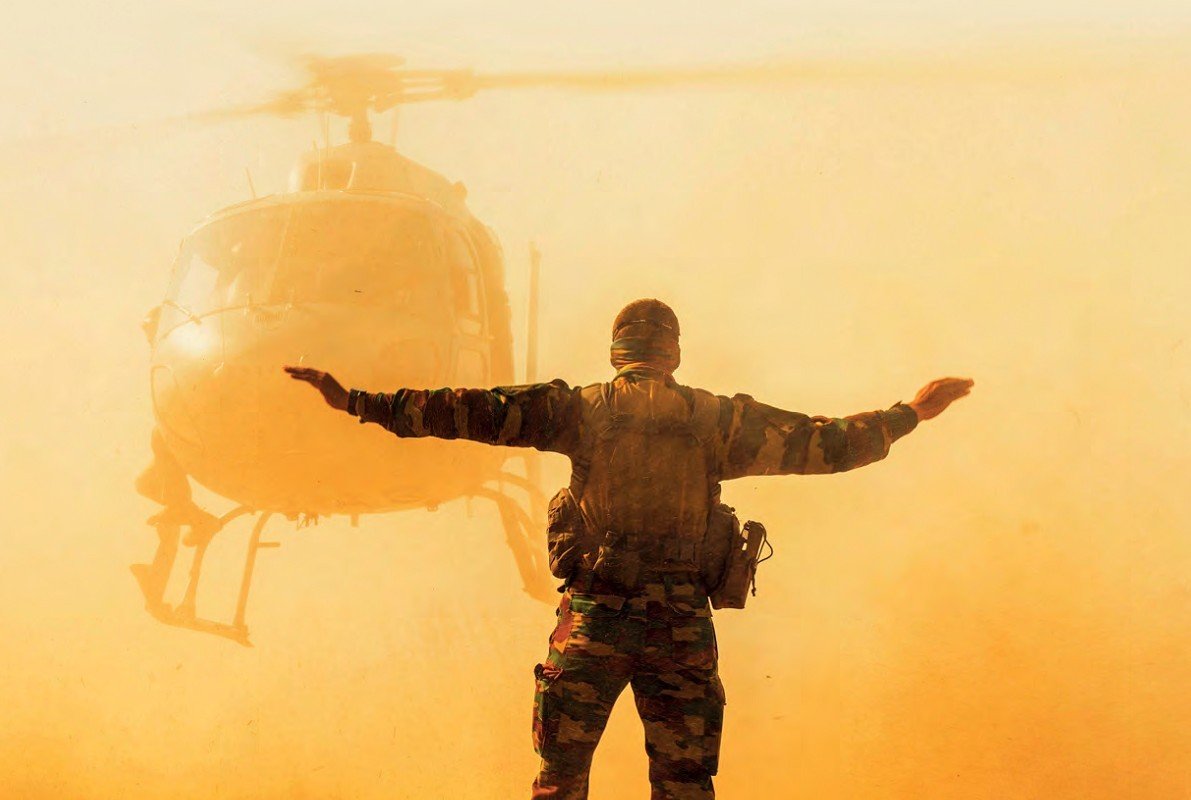 Maintenance of the ALAT Fennec fleet will be outsourced to Héli Dax.
All images Jan Kraak

The first involved a temporary reinforcement of forces stationed in French Guiana, more specifically to increase airspace security surrounding the launch site for the Composante Spatiale Optique (CSO) intelligence satellite; the French launched the first of three such satellites on December 19.

The CSO system should be operational by 2021 and will allow the French military better day and night-time imagery. Two Armée de l’Air Rafales, one E-3F and a C-135, deployed to BA367 Cayenne. One An-124 and an Armée de l’Air A400M flew 115 airmen and 48 tonnes of freight and equipment to French Guiana.

The second deployment involved two Rafales assigned to the Forces Aériennes Stratégiques, flying nonstop to BA188 in Djibouti on January 8 after an eight-hour, 3,000 nautical miles (5,500km) flight from BA113 Saint-Dizier. The exercise, called Marathon–Monfreid, had three main goals: continued training of aircrew for the long-distance nuclear strike role; to train for first strike capability in a highly dense threat and tactically realistic environment; and to provide a test team from the Centre d’Expertise Aérien Militaire (Centre of Military Aviation Expertise), which is currently testing the A330 Phénix tanker with valuable data. The Armée de l’Air’s first Phénix joined the Rafales on their return journey.

The simulated strike mission involved four aerial refuelling brackets carried out by a C-135 that took off from BA125 Istres. After a stay in Djibouti, where the Rafales flew missions with the Mirage 2000- 5s assigned to Escadron de Chasse 3/11 ‘Corse’, the deployment flew further south to Détachement Air 181, the French military base located on Réunion Island in the Indian Ocean. The stay at Réunion (the second time the type has visited this overseas French territory) saw the Rafales fly local sorties.

Phénix, the latest addition to the Armée de l’Air, also flew to Réunion and refuelled the Rafales on the first leg of their trip back to the French mainland on January 17. This, the second simulated nuclear strike mission of the deployment, was the longest sortie flown by a Rafale to date. Almost 12 hours in duration, the sortie saw the Rafales fly approximately 4,900 nautical miles (9,000km) to the French mainland, where they carried out a nuclear strike scenario involving a simulated penetration of enemy terrain and consequent release of an ASMPA tactical nuclear missile. In addition to the Phénix, two C-135 were on call to refuel the Rafales.

The third launch of an Anti Navire Léger or Sea Venom light anti-ship missile was carried out by MBDA and the Direction Générale de l’Armement (DGA or Directorate- General for Armaments) at its Île du Levant, Mediterranean test facility on November 14.

The platform used for the trial was an SA365N Dauphine assigned to the Direction Generale de l’Armement’s Essais en vol (DGA Flight Test department). The Anti Navire Léger or Sea Venom is a joint French-British project signed by both countries in November 2010. In French service, the missile will equip the future Hélicoptère Interarmées Léger (joint light helicopter) with the Aéronavale and Royal Navy Wildcat helicopters.

On November 29, the DGA accepted the first upgraded Falcon 50Ms from Dassault. The manufacturer installed a hatch to allow the crew to drop flares and rescue boats during a maritime SAR mission. Although the four original Falcon 50Mi aircraft delivered to the Aéronavale have such a hatch, the four Falcon 50Ms (transferred from the Armée de l’Air between 2013 and 2016) did not. After the aircraft’s acceptance, the DGA signed a contract to upgrade the three remaining Falcon 50Ms. Two aircraft should be upgraded in 2019 with the final one planned for delivery in 2020. 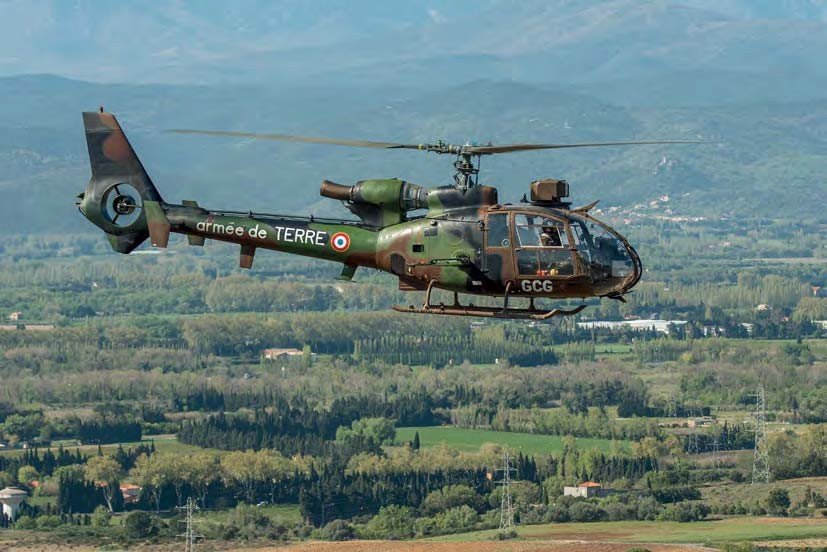 According to the accident report, the collision and subsequent crash of ALAT Gazelles 4209 and 4212 in 2018 identified several causes that led to the accident, killing five experienced pilots. 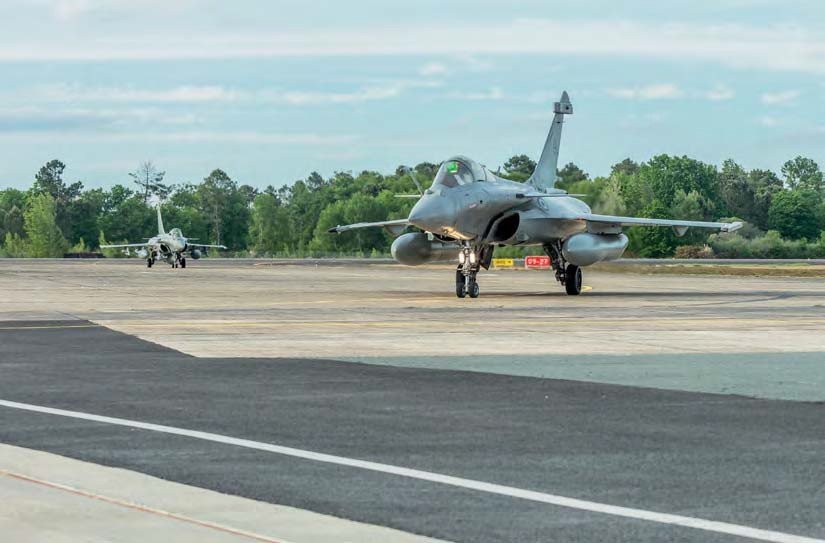 Besides a permanent deployment in Jordan, French Rafales have carried out three long-distance deployments since last September: Australia and South-East Asia, Réunion and French Guiana.

In late December, the DGA announced it had accepted a second Camcopter S-100 drone for the Aéronavale. Equipped with a Wescam MX-10 and an automatic identification system, the drone was subsequently transferred to the Bâtiment de Projection et de Commandement (BPC or projection and command ship) Dixmude for trials. This is the second S-100 for the Aéronavale, the first one was delivered in 2017. According to the DGA, the S-100 drone is now operational on the BPC Dixmude. During its next maintenance period, the ship will be outfitted with additional antennas, a dedicated maintenance area and better integration of the drone’s operator and drone feed in to the ship’s operations centre.

On January 14, the DGA announced that Dassault’s Neuron UAV had started its fourth series of experimental trials at Istres in November. The goal of the lowobservability trials is to confront the stealthy Neuron with different land-based and aerial sensors to gather information on the capability of the air vehicle and the different detection systems currently in use with the French and other European forces. To this end, the Ejército del Aire sent two Eurofighters to Istres on December 17 to fly as opposing forces against the Neuron. According to Dassault, the Neuron recently reached the milestone of its 150 flights. This fourth series of trials will continue until the spring of 2019.

Minister of the Armed Forces Florence Parly announced on January 20 the first armed French MQ-9 Reaper would be operational for Barkhane by the end of 2019. The Armée de l’Air currently has four MQ-9s on strength based in the Sahel. One Reaper is based at BA709 Cognac and one crashed near its base at Niamey in Niger on November 17, 2018. Six more Reapers are on order and should be delivered by 2020.

During her New Year’s address to the armed forces on January 21, Florence Parly announced the maintenance of the Aviation Légère de l’Armée de Terre’s 18 AS555 Fennec helicopters would be outsourced to the Héli Dax company for the next ten years.

Aviation Légère de l’Armée de Terre (ALAT or French Army Aviation) uses the Fennec for instrument flying training of student pilots from all three branches of the French armed forces. The new contract with Héli Dax should reduce the cost per flying hour from €3,500 to €1,800.

Two reports into recent ALAT crashes were published in January. The first involved a mid-air collision and subsequent crash of two ALAT SA342MA Gazelle helicopters on February 2, 2018, which resulted in the death of all crew on board both helicopters. One Gazelle and the three instructors on board were assigned to the École de l’Aviation Légère de l’Armée de Terre, based at Cannet des Maures. The other two victims were pilots assigned to 4e Régiment d’Hélicoptères des Forces spéciales.

Released by the Bureau Enquêtes Accidents pour la Securité de l’Aéronautique d’État (BEA-E) on January 15, the accident report said the helicopters were each flying sorties independent of each other. Due to a delay as the result of radio issues for the first Gazelle, a five-minute interval between take-offs was reduced to oneand- a-half minutes. Combined with insufficient preparation to anticipate each other’s position during the separate sorties, the probable blinding of aircrew by the sun, the possibility of the fuselage masking the other helicopter and the absence of a crash avoidance system on the Gazelle, the BEA-E concluded the collision that occurred approximately eight minutes after take-off was a mix of human error and limitations regarding equipment. The service made several recommendations, one of them being to install a collision avoidance system on the Gazelle fleet.

The second involved the crash of an ALAT NH90, which took place on board the BPC Dixmude on October 17, 2018. Human error was determined to be the cause of this accident, as well. The Dixmunde was on its way to Norway for Exercise Trident Juncture 2018 when the NH90 slammed on to the flight deck during a night-time take-off, injuring four sailors. The French Navy’s Commander in Chief, Admiral Prazuck, addressed French sailors in a video message on January 17, explaining that one of the tie-down cables that keeps the helicopter in place when not in operation was overlooked and still attached to the NH90 at the time of take-off.