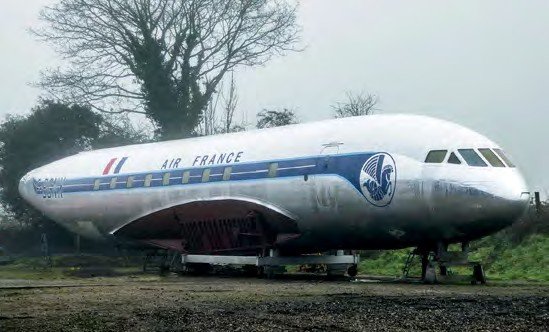 The historic fuselage of DH106 Comet 1A F-BGNX will no longer have to put up with this kind of weather thanks to the Heritage Lottery Fund’s grant of £1.9 million.
DHAM

On 25 April, the de Havilland Aircraft Museum (DHAM) announced the allocation of £1.9 million from the Heritage Lottery Fund towards construction of a large new hangar at the Salisbury Hall, Hertfordshire site. Among the significant airframes that will be housed in it are the oldest DH106 Comet fuselage in existence, from Series 1A F-BGNX, built at Hatfield in 1953 for Air France. Planning permission for the hangar was granted by Hertsmere Council back in 2016.

Museum chairman Alan Brackley says, “Thanks to the money raised by the National Lottery players the project will not only safely display several important aircraft exhibits inside the new building away from the rigours of the British weather, but it will be able to offer the local community an exciting venue for meetings, conferences, parties, learning and other social events.”

Construction work is expected to begin in July and be completed in 2019. “The museum needs to fund-raise a further £250,000 before we get the National Lottery’s permission to start the building works”, added Brackley, “so all support is very welcome and donations can be made through our website or at the museum.”

The grant comes nearly 60 years after the museum was founded by ex-Royal Marine Maj Walter Goldsmith — the then owner of the Stuartperiod Salisbury Hall — to provide a permanent home for the prototype DH Mosquito, W4050. Having restored the dilapidated manor house, Goldsmith heard of former DH deputy public relations manager Bill Baird’s ceaseless efforts to save W4050 from the funeral pyre. The two men set up a Mosquito Appeal Fund to get the immortal machine back to Salisbury Hall where it had been designed and built during 1940. When it opened in a small Robin hangar on 15 May 1959, this was the first museum in the UK to be solely dedicated to aviation.

On 1 April, Easter Sunday, a plaque was unveiled in front of W4050 by Charles Clarke from the Institution of Mechanical Engineers to mark the recent presentation of its Engineering Heritage Award to the aeroplane. “The Mosquito is a truly remarkable aircraft, a very splendid example of inspired engineering that needs to be celebrated,” Clarke said, going on to praise the “wonderful restoration work” by the museum’s volunteers.